Last week, when Dave Rennie named the 34 players who departed Australia on Wednesday to join three overseas based Wallabies on the spring tour, he had some fatherly words about some of his flock.

“Invariably we’ve got some guys who, as younger men, made some poor decisions,” Rennie said. “They’ve made shifts around that and and I’m going to judge guys on how they behave within our environment as opposed to what other people are telling me about them.”

Izaia Perese is one of those young men; a footy player signed to an NRL deal, busted on a drugs charge, who thought he’d hit rock bottom, only to discover there was further to fall.

On Wednesday, Perese, 24, took his seat on the plane headed north, having made the same trip five years ago as a development player under Michael Cheika. So much has changed in that time, as Perese is painfully, yet hopefully, aware.

“I feel like my rock bottom was over in France,” said Perese, who had gone there to play rugby after the Broncos ended his contract over the drugs related incident, in which a conviction was not recorded. 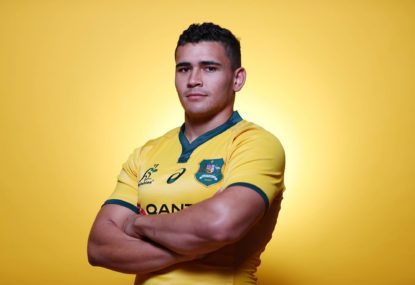 “Every day I was waking up and I just felt like I was sinking and it was hard to get through a day without thinking of home. Over in France was pretty rock bottom.”

Perese left the Reds to join the Broncos in 2019 and was generating some buzz before that fall from grace. He took off for France but the loneliness ate at him and he made a call to Waratahs defence coach Jason Gilmore, a contact from his Reds days, and he told him he wanted a second chance in Australian rugby.

“I’ve thought about it for the last week or so and had a chat with my mum and it’s quite funny that I’m back here now,” he says.

“It’s all meant to be, union’s my game, they gave me a second chance.

“I think it’s amazing. I’ve thought about it and I just think this time I won’t take it for granted.

“I’m definitely going to enjoy it a lot more off the field with getting to know the boys, not being so quiet because before I was real young, I was uptight about making the team but now the journey I’ve been through, going to France and a lot of other things, it’s made me appreciate my mates and everything I have.”

On Wednesday, as he owned up to an attitude problem, you could imagine the discussion he’d had with Rennie, who said: “With all these guys we spend a lot of time having a conversation.”

After Perese’s capable performances in a dire Waratahs team, the Australian coach had wanted to bring him in for the French series, but a shoulder reconstruction ruled him out.

His selection for this tour is intriguing. Only last week Rennie admitted he selected Perese without being sure of his fitness and yet his best chance of game time appears to be against Japan where Samu Kerevi is missing through injury.

“He hasn’t played a lot of footy so we’ve got a lot of work to get into him and whether he’ll be ready in 10 days to play Test footy is the question mark,” said Rennie.

“He’s been back in contact for the last couple of weeks and he’s ticked every box.”

For Perese, it’s part of his journey, as was his time in rugby league.

“I think the switch to rugby league was part of the journey I was supposed to take,” Perese said.

“It really taught me to start from the bottom again. I didn’t know it at the time but looking back I felt like I had a bit of an attitude problem, where I was exposed to the Wallabies environment at an early age, so I felt like things came a little easy to me.

“Going to the Broncos, getting absolutely pumped in the pre-season, starting from the bottom again, spending a whole year in [Queensland] Cup, it taught me a valuable lesson that footy isn’t life. I felt like I was just watching and learning.

“Obviously I mucked up a bit in the past and it just led me back into rugby union.”

Rennie, like a father and a prodigal son, was there waiting.