On the eve of the titanic two-match tussle between the Wallabies and Springboks in the recently-concluded Rugby Championship, the ex-Reds and Wallaby wingman Lote Tuqiri was part of an event on the Gold Coast advertising Australia’s bid to host the 2027 World Cup.

In the process, he found himself recommending the selection of Queensland’s tighthead prop and school prodigy Taniela Tupou to Dave Rennie – perhaps inadvertently, but certainly wholeheartedly.

“Maybe I’m old school, but I’d play my best XV. I’d start with my best XV and then let everything else get dealt with after that.

“You’d tell him that – but I think for Taniela, he probably wants to start as well.

“So, you’ve got to wonder what that’s doing for his confidence from a mental point of view.

Maybe it is old-fashioned to blur the boundary between ‘starters’ and ‘finishers’ that modern professional coaches like to delineate so clearly.

South Africa even went further down that road in their second match versus the All Blacks, introducing their bench front row of Steven Kitshoff, Malcolm Marx and Vincent Koch before the first period had even ended. The finishers enjoyed more minutes on the field than the starters.

In a number of articles over the past year, I have looked at the intriguing choice facing the Wallaby coaches at tighthead prop.

They have arguably two world-class players in that position in the form of the Tongan Thor and Brumbies’ captain Allan Alaalatoa, but they are about as far apart as two players competing for the same role can be.

Tupou is short, square, explosive and highlight-reel mercurial; Triple A is longer and leaner in the torso, a camera-shy grinder in tight and loose – the more work he can do, in places deep and dank and dark, the better he likes it.

The two men epitomise their provinces: one the blue-collar point-earners, calling a spade a spade; the other looking to turn the rugby world upside down, with a flashing moment of end-of-the-earth genius.

If anything, the two players have moved closer together since I penned those two articles back in August/September last year, and since this comparison of the top Australian provincial props appeared only four months ago.

It contained some spectacular stats from Super Rugby Trans-Tasman, showing that while Taniela carried the pill twice as often as Alaalatoa, the Brumbies man made three times as many tackles as his Reds’ rival, and with a 35 per cent better chance of success.

But there are signs that some of Quade Cooper’s satisfaction with domestic drudgery may be rubbing off on Tupou. Here is a table with the key stats from the Rugby Championship.

DO’s are ‘decisive outcomes’: runs resulting in a clean break or tackle bust. All ‘intervals’ are reflective of work rate in different areas.

Even allowing for the differences in international rugby, Taniela’s stats have closed up considerably. Both his work rate in defence and his tackle completion rate have improved markedly, and the lower rate of ruck attendances is justified by a higher proportion of ball-carries.

Those heroic sweat-soaked 78 minutes that Taniela Tupou spent out on the field battling first Trevor Nyakane, then Steven Kitshoff in the opening fixture against South Africa may prove to be the making of him, and proof positive that he deserves to start rather than just finish games.

The following simple table also indicates an advance in the Australian scrum.

The Wallabies lie just behind the Boks – the modern masters at scrumming for penalties – and the lion’s share of those penalties were won with Tupou starting in the two matches versus Argentina.

Let’s take a peek at the moving reality behind the paperwork. Against the Boks’ dominant defence, Australia needed heavy-duty ball-carriers who could puncture the line, and they got them in the shape of Rob Valetini and Tupou up front, and Samu Kerevi behind.

Both runs were essential prefaces to Australian tries, with Faf de Klerk being dismissed for cynical play after the first, and the second clean break leading directly to Len Ikitau’s second score of the game.

It is not just Tupou’s power, but also his footwork around contact, and the neat spin move that take the eye. It is the combination of both that make life intolerable for a tackler.

There was still time for a typically Queensland highlight-reel moment in the second half.

The no-look pass may not be strictly necessary, but it keeps Tupou plumb-line straight, looking North-South down the field as he gives to Marika Koroibete.

The use of Taniela as an extra pair of hands on the short-side was a recurrent theme in the first game versus Argentina.

As we observed last week, Quade Cooper is always looking to coax an extra body into the attack to overload the D, and in the second instance it is Tupou offering to come in short off his outside shoulder.

The Wallaby defence coach Matt Taylor has simplified the Tongan Thor’s role without the ball. He has one priority and one priority only – to get to Guard or first defender out at every ruck in between the two 15 metre lines. 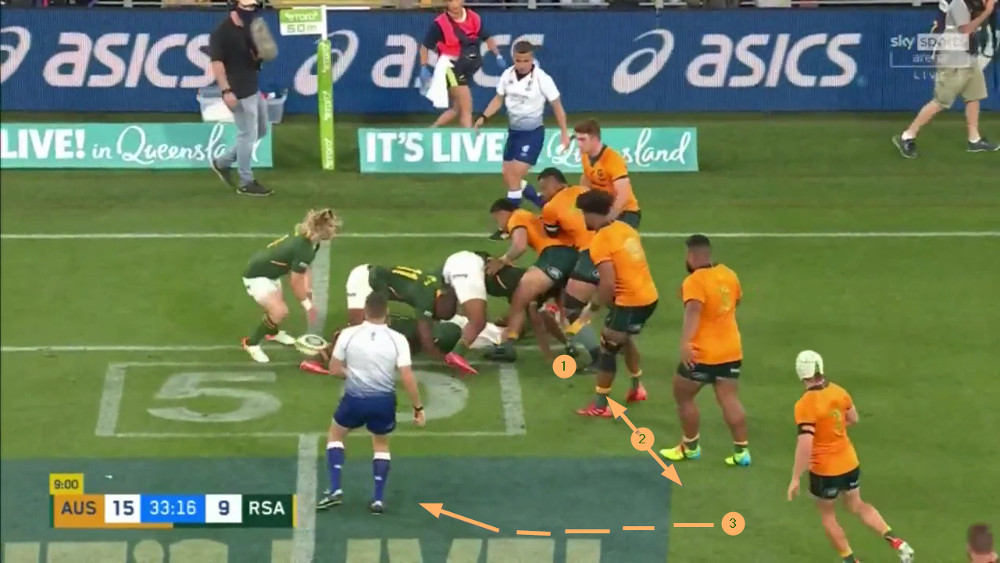 The Reds’ tighthead wraps around the first ruck, then reappears at first defender at the second. The idea is simply, to fill space close to the breakdown and allow the likes of Michael Hooper to fly out on to the ball and apply pressure. 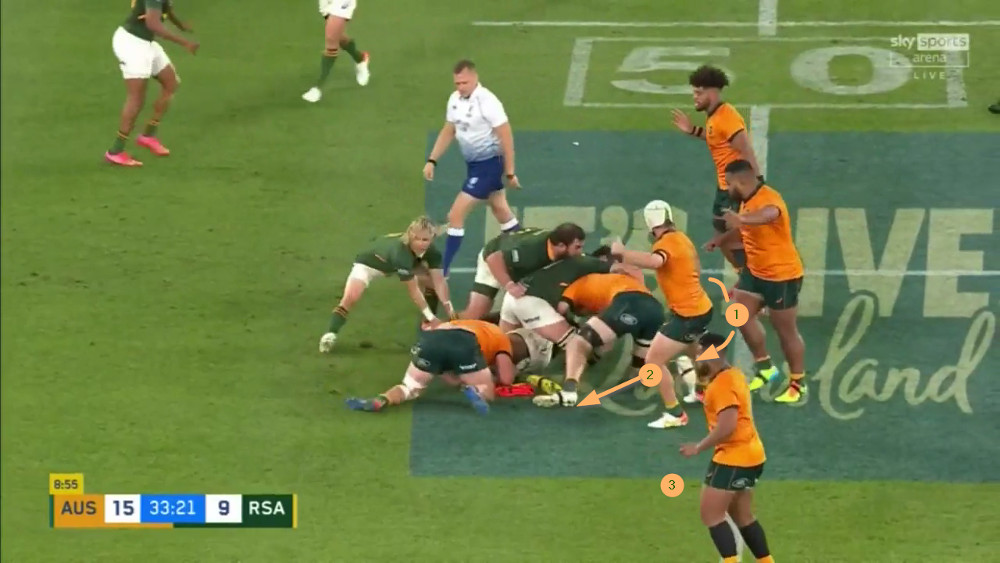 For the fourth ruck in succession, Tupou’s feet come into shot at first defender at the end of the play, and the Wallabies remain in good defensive shape.

Taniela Tupou was the dominant influence at scrum-time in the double-header against the Pumas, against two young adversaries in Facundo Gigena and Rodrigo Martinez.

Neither had the wit or the experience needed to counter the natural angle Tupou brought on both feeds. 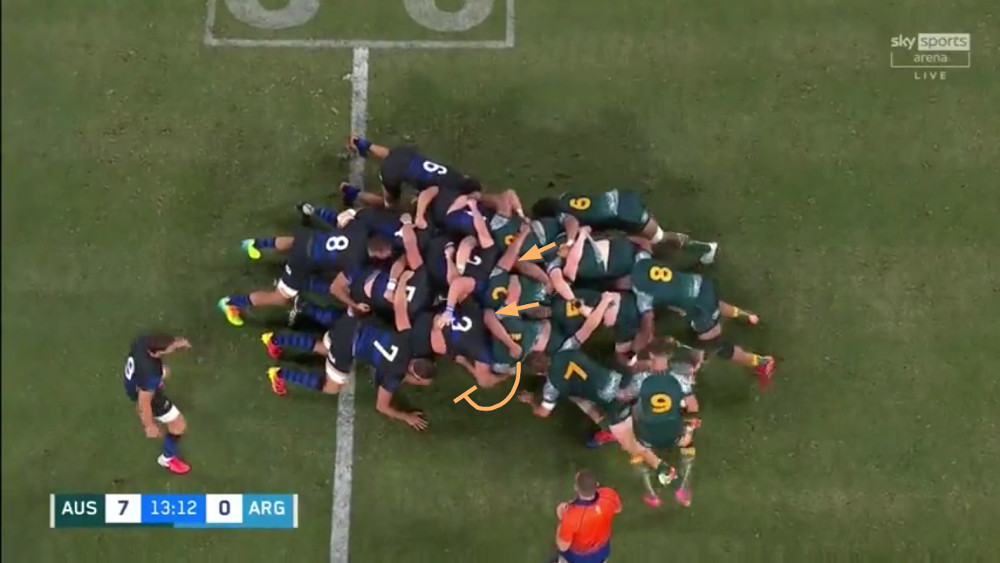 On Australian ball, Tupou moves the scrum towards centre-field, and James Slipper steps out and around the Argentine tighthead prop to win a penalty. The same tactic worked just as well when the Pumas were feeding the ball into the set-piece.

The lateral slewing of the scrum is ultimately decided by one man, and that man is Taniela Tupou.

Association can be a powerful influencer in the mind of a top sports coach, and Taniela Tupou will now be associated with starting in three consecutive wins at the tail end of a Rugby Championship which began with two losses to New Zealand, and Allan Alaalatoa in firm possession of the number three jersey.

His hold on it, after returning home for the birth of his child in the week before the second game versus the Springboks, is no longer so assured. The Tongan Thor has begun to alloy his undoubted physical talent to an increased number of involvements and commitment to the unglamorous chores on defence.

Maybe some Quade’s new age magic has rubbed off, and the appeal of ‘sweeping the sheds’ has been magnified.

The battle royale between two top-drawer operators competing for the same spot, looks set to continue all the way up until 2023. It may have started as Brumbies versus Reds, work-rate versus game-changing genius, but it is now evolving into something different under Dave Rennie’s careful stewardship.

There are signs that learning is really taking place, not just being spoken about blithely after losses, and Taniela Tupou is finally beginning to fulfil his potential, under challenge from a man who may be just as good as him.

The competition for places is bringing the best out of both players, and this is one teenage prodigy who will not disappear from professional ranks without a trace.