'They played for Bankstown 4ths': Should cricket's power brokers have played at highest level?

The Roar
14th October, 2021
60
Join the conversation
9843 Reads
Advertisement
Write for The Roar

There’s absolutely nothing new about Ian Chappell getting cranky over cricket administrators, but his latest comments are right on point.

In the fallout of the resignation of Cricket Australia chairman Earl Eddings, the second time in three years Cricket Australia’s chairman has been forced to fall on his sword Chappell has launched a scathing review of the shortcomings of the game’s administration.

Chappell’s key beef is the lack of cricket experience on the cricket board – hitting out at a succession of suits who had played for “Bankstown fourths, or Richmond thirds”.

“The problem is it won’t make any difference who gets the job,” Chappell told Wide World of Sports on Thursday.

“They’ll appoint a new person to replace him, and it won’t make a scrap of difference. History tells you that nothing will change.

“There’s never been many ex-players on the board, and as I’ve said before, those that are there are mainly window-dressing. 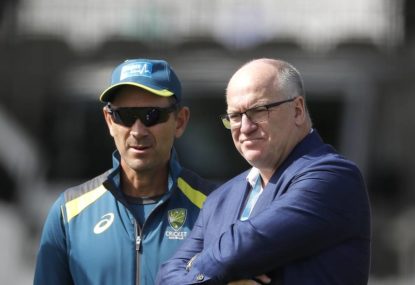 Of the nine board directors, only Mel Jones has played international cricket and Greg Rowell has played first class cricket. Lachlan Henderson played grade cricket in Western Australia, but according to WWOS the other six have little to no playing experience.

“I used to take great delight in pointing out to board members that they hadn’t played the game, and you’d always get the same response, that they’d played for Bankstown fourths, or Richmond thirds, or something like that,” Chappell said.

“And I’d tell them that I played golf as well, but the game I played was a lot different to that which Jack Nicklaus played.

Chappell said a chairman without elite experience was a long running problem in Australia.

“Fred Bennett, who later went on to be chairman of the board, managed our side in England in 1975. About a week into the tour he called me up to his room and told me he wanted to send Jeff Thomson home, for some really minor incident,” Chappell said.

“I asked him if he had all the air tickets in the safe in the corner, because if he was sending Thommo home he may as well have sent the rest of us home as well, because he obviously wasn’t interested in winning.

“If you’re wanting to send Jeff Thomson home for something trivial, it’s clear you don’t understand the game. And yet a few years later Fred ends up as chairman of the board.”

He said his brother Greg Chappell had been discouraged from trying to become CA chairman when he briefly served on the board.

“There’s got to be a change in mindset from the board, they’ve got to encourage former players to want to be members of the board, with the chance of getting the top spot if they want it,” he said.

“The biggest issue at the moment is getting the board sorted out. But do I think it will happen? No.”