A limp effort against Port. An absolute shellacking by Melbourne. Richmond went from first to eleventh. Their excuse was injuries and the late finishing to the 2020 finals. Geelong were no different. But I am not affording the Cats the same limp excuse. Changes are needed.

But on a positive note, let us look at what is needed with Jack Henry. Jack will have a busy off season. Firstly, he needs to be cloned, twice. Then the Cats need to find the best tall basketballer on the coast. Then breed him. Save those father son/ daughter drafts.

Put them in cotton wool, give them strength and endurance training and a thorough preseason. Save some cotton wool for Tom Hawkins, Mark Blicavs and Sam Menegola.

Isaac Smith has a few more years to play. Give him some surfing lessons to keep him satiated.

Esava Ratugolea is a beast. Give him some goal kicking practice and unleash him.

Sam Simpson, Tom Hawkins, Tom Atkins, Jed Bews, Brad Close, Quinton Narkle and Max Holmes are all quite young to be in a grandfather team. They have been blooded and now they need to step up.

Zach Guthrie is too soft and too chokey. He needs to be delisted.

Charlie Constable should be told that there is a spot for him if he is good enough. Jordan Clark should have been afforded the same courtesy but a bit late now.

Henderson, has he been rightly delisted. He gave a few extra years of service but he dropped the bundle, particularly in the finals. His clumsy play was very costly.

Josh Jenkins has already been given the heave ho.

Shaun Higgins needs to be let go. Maybe play him in the VFL until his contract is expired.

Luke Dahlhaus has outlived his usefulness. He is too old and needs to be delisted to give a younger player a go.

I think Jake Kolodjashnij is at the crosswords. He needs to consistently perform or lose his spot.

Geelong should have gone for McEvoy rather than Ceglar (meets the age profile better). Hopefully Ceglar teamed with Rhys Stanley and Blicavs as backup, Geelong can win an occasional tap.

Darcy Fort has been let go for steak knives. That is better than being delisted. Hopefully Shannon Neale can become the next Ottens.

Then we come to Joel Selwood. He still has another year in him. It is a bit harsh seeing that he is the same age as Isaac Smith. Tell him it is his last and he should make the most of it.

Finally there is Chris Scott. Tell him it is his last year and make the most of it. Give Clarko a call and have him ready for 2023.

Let us review the Cats’ game plan. Geelong have developing a two-paced game. They use short, sharp passes to get the ball to beyond the centre.

From the centreline, there were two options: take it on with verve or keep the short, precise game until it reaches a big beast at full forward. In 2022, the Cats need to take the game on more. Scott can’t control everything. He needs to leave it up to players.

If the ball is won in the centre or on rebound, the Cats can hit back fast and hard. The problem with 2021, key interceptors and rebounders such as Zach Tuohy and Tom Stewart were absent from injuries. 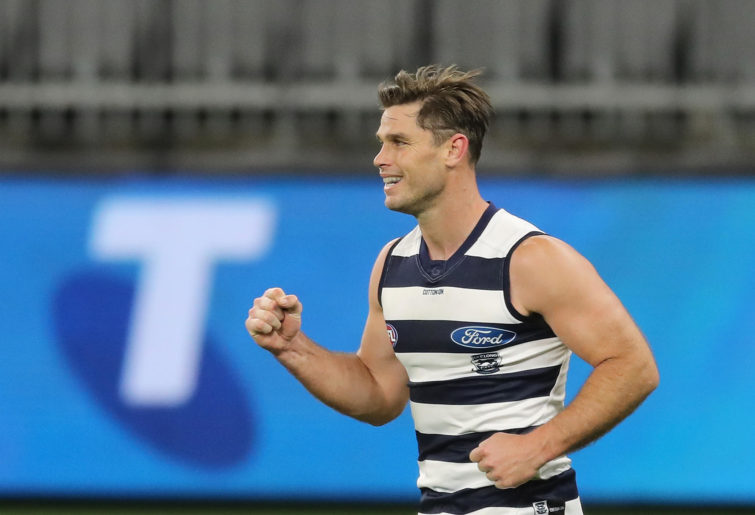 Which Geelong players can hold their heads up high? (Photo by Will Russell/AFL Photos via Getty Images)

The backline is tight. Players help each other out There is great and consistent intercept marks, and awesome pressure. Apart from blooding some youngsters, leave well enough alone.

Addressing the age question. The Cats list in 2021 had an average age of 25.4. 0.2 years more than the Saints and a whopping 0.8 years more than this year’s premiers. But they also have the most experience with 88 games on average. Gold Coast have an average of 52 games. I think it shows.

The Retirement of Jenkins (32) and Henderson (31) will help reduce the age profile. But pushing out Higgins (33), Dalhaus (28) would be a benefit. Fort(28) was swapped for the thirty year old Ceglar. This does push the age up but if you are no good, it doesn’t matter how young you are.

Ottens was 27 when he played a crucial part of Geelongs’s 2007 premiership and was 31 when he became a triple premiership player in 2011.

The players over thirty that still have currency are Selwood, Blicavs, Dangerfield, Hawkins and Stanley. When they slow up over the years, they need to be replaced. They should be fine in 2022.