If, like me, over the last couple of months you have fallen in love with the show Ted Lasso, no doubt you have read those words in Dani Rojas’ voice and may even be running around your living room in a circle chanting ‘Rojas, Dani Rojas, Dani Rojas’.

I binge watched season 1 in one day and am now re-watching season 1 with my partner before we move onto season 2 (so please, no spoilers – I know that one of my favourite season 1 characters goes through a big transformation).

But what is it about the show that makes it so compelling?

When I think about the show, the word that immediately springs to mind is joy. It just makes me happy.

It’s been an extremely difficult two years for many of us due to the pandemic, so Ted Lasso brings the positivity and joy that many of us are lacking at the moment.

One of the gifts that the show gives the characters is that it allows them to feel and us to feel alongside with them.

The male characters on the show have conversations where they talk about things other than football. The men have real conversations about how they are feeling and the challenges they are facing. The ‘Diamond Dogs’ were formed for that very purpose.

Ted, Coach Beard, Nate and Higgins come together to help sort out relationship problems within the group but also for other people too. Roy Beard accepting relationship advice from Higgins was not a moment I was expecting.

In a world where there is still stigma about men sharing their feelings, Ted Lasso depicts a different kind of male friendship that includes everyone.

Then there are the female characters; particularly Keeley and Rebecca.

The relationship these two has is again genuine and built on mutual respect, despite how different these two women are.

There is a belief by so many people that women undermine other women. Not so in Ted Lasso, where these two women support each other, hold each other to account and also have plenty of fun.

I adored the moment when Rebecca offered Keeley a job, because of her expertise but also because Keeley was nice to her in the toilet. As Rebecca proclaims, plenty of men give each other jobs in the toilet. 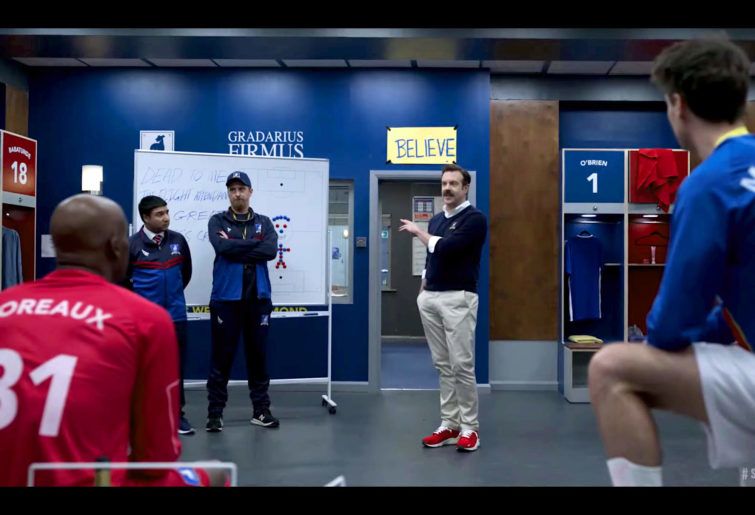 Everyone is cheering for Ted. He is kind, funny and unfailingly positive. Human beings crave connection and despite coaching a team in a sport he knows very little about, Ted understands people.

It isn’t just the men on the team that he is concerned with either. He wants to make AFC Richmond a family and slowly chips away at all the other characters until he wins them over, as well.

This allows the other characters to feel safe and show us who they really are. It was that safe environment that gave Rebecca permission to sing ‘Let it Go’ in front of the entire team and Higgins to tell us all about Cindy Clawford.

But my favourite thing about Ted is that status is not important to him; he believes the best in people and treats people with kindness, no matter how limited his interactions with them. From asking Nate his name on the first day, to getting Cam Cole to play at the Gala Dinner, to the young woman who lives near him who he plays football with, Ted looks at people and thinks friend not competition.

Now, if only I could find out the ingredients in his biscuit recipe?

Then there’s his right-hand man, Coach Beard. A man of few words, but his interactions with Ted are among the funniest in the show. There’s a close bond between these two and it’s clear that they aren’t just colleagues, they are best friends.

In the episode where Ted and his wife Michelle decide to leave, Ted farewells his soon-to-be ex-wife and takes a seat on a bench. Moments later, Coach Beard appears with a beer to share with his friend.

I’m not sure what it is that I love about Roy Kent. Is it his gravelly voice? Is it the relationship he has with his niece Phoebe, or is it that he rarely smiles?

Then there are the rest including Keeley, Rebecca and Higgins.

I also challenge anyone to see Sam Obisanya smile and not beam right back at him.

Just like the world, at times sport can be an ugly place. Typically, male sport is depicted as physical, aggressive and with plenty of cussing.

As fans we are constantly being sold scandal; player misbehaviour, player dissatisfaction with the coaching staff, coaching feuds and on and on it goes.

Perhaps if more of us looked to Ted as a guide in how to treat the people around us (imagine saying ‘I appreciate you’ to someone who had just called you a ‘wanker’) then our sports and our society would be much safer and kinder places.

And that’s the type of hope that I think we should all try to ‘believe’ in.