The Australian coach has plenty to deal with leading into the match, with Marika Koroibete withdrawing from the squad for family reasons and doubts hanging over a number of Japanese-based stars, including Quade Cooper, being available for the entire tour.

Rennie also discussed Samu Kerevi’s ongoing recovery from an ankle injury sustained in the final Rugby Championship game, and his plans to replace the star centre should he fail to get up.

Here’s everything he had to say at Sunday’s press conference.

On what we can expect from Japan
They play very much a high-speed, high-skill type of game – no surprise with Jamie [head coach Jamie Joseph] and Tony [assistant coach Tony Brown] in the mix,” Rennie said.

Joseph was head coach of the Highlanders between 2010 and 2016, with Brown his deputy there before taking on the head role himself this year. Both had regular battles with Rennie during his time as Chiefs coach.

“They’ve got Scott Hansen in their mix too from a defensive point of view. A smart man, who’s worked a lot with the Crusaders.

“What we know with them is they will spend a lot of time scouring over all our footage, looking for weak links to expose,” he said.

Japan have become renowned for their frenetic, high-scoring style of play, and Rennie is anticipating something similar on Saturday.

Always brutal, always high-paced, so I expect the same,” he said.

“The key thing is, we’ve got to try and shut down their set piece. They will have innovative plays from lineout and scrum, we’ve got to make that source of ball difficult for them.

“We’re going to have to do a good job around the quality of our defence and slowing their ball down to get a wall in front of them. We’ve got a plan around how we need to play against these guys.

“We’re playing in a stadium that has a roof so we should get a fast track and two sides that both want to play. It should be a belter.” 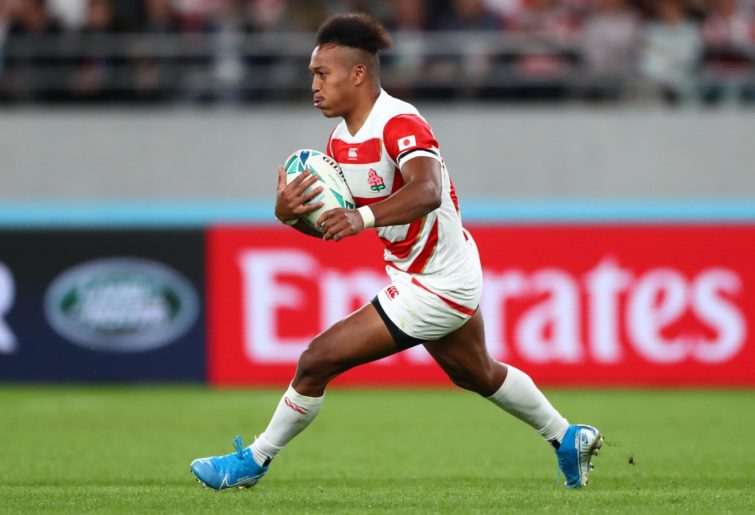 While winless in two Tests in 2021, the Brave Blossoms have continued their rise with a brave 28-10 loss to the British and Irish Lions in June, before following up with a high-octane 39-31 defeat to Ireland a week later.

“They are a genuine threat,” Rennie said.

“They’ve got a lot of experience in their group now; obviously [there are] a number of foreigners who have done their time here and are now eligible to play for Japan, so they’ve got a really good mix and a lot of confidence.

“They’ve got really good detail around their game, a really good skillset. They’re very good around generating quick ball, and with the quality of their carry and clean.

They’re a different beast to what we’re going to face over in Europe in regard to how they’re going to play, but that’s great from our perspective. An opportunity to learn again over the next four Tests, and a big challenge over here.

“We’re looking forward to it, it’s going to be a hell of a game.”

On Samu Kerevi’s chances of being named

“Samu Kerevi’s got a syndesmosis injury from the last game, so we’ll test that over the coming days to get clarity on whether he’s available this week,” Rennie said.

“We’re trying to give him every opportunity to be right for this game.”

While a major blow should he be ruled out, Rennie was quick to note his confidence that the experienced centre can be covered.

“Samu’s been excellent, but he hasn’t been our only source to go forward. We’ve had guys like Rob Valetini carrying a lot of ball for us to create go-forward. In the last few weeks we’ve been very direct too, so a lot of our big men carrying to try and give us yardage and create go-forward.” 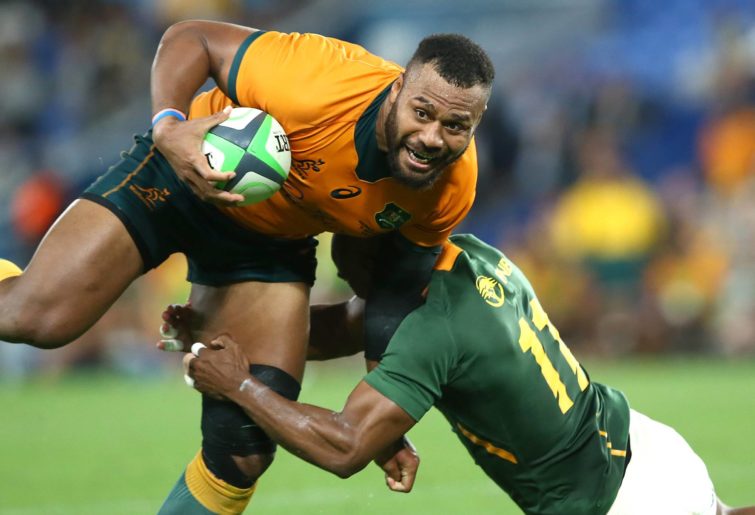 Rennie was asked if Hunter Paisami could be the man to replace Kerevi at number 12, and the coach confirmed he’s well and truly in the running.

“If it was Hunter that replaced him, he’d started every Test bar one prior to being unavailable, so we’ve got a lot of confidence in him.

“With Quade at 10, a very experienced 10, it’d be good for those young men outside him. We’ve seen Len Ikitau really grow over the last few months and expect him to keep doing that.

“It’s a great opportunity. if Samu doesn’t play, someone has to step up, that’s what we’ve seen constantly from other players in the last few months.”

“We’ve been discussing it [Koroibete not travelling] for a while. Obviously we let him go home a week early during The Rugby Championship,” Rennie said. “COVID’s thrown a lot of curveballs at all of us.

“Marika’s been away from home for a long time, [wife] Emma’s pretty isolated; they’ve had a newborn baby and they’ve got a couple of other young boys.

“As always, it’s an opportunity, isn’t it? Marika didn’t play the last game [against Argentina]. Jordie [Petaia] got a start, it gave Tom Wright a sniff off the bench who played really well.

Rennie also hinted that Koroibete’s withdrawal could open the door for British-based winger Luke Morahan to fill in when the squad arrives in the UK, having played three Tests for the Wallabies in the early 2010s.

“Obviously, we were watching him [Morahan], as we’ve been looking at lots of players around the globe,” he said.

“We’ve made a real commitment to the guys we’ve left behind to go straight on leave, and to come back in November to have a decent off-season. We’re very focused on maintaining that, which will mean we won’t look back at home to try and bring someone over.

On the availability of Japan-based players

Rennie said while his priority would be ensuring as many Japanese-based players are available as possible in line with World Rugby’s ‘regulation nine’ rule, he is also unwilling to risk burning any bridges with Top League clubs leading into a World Cup.

“Technically, from a ‘reg nine’ perspective, players have to be released for national duty. So that includes Scotland, England and Wales for us. But we’re conscious that we want to build a strong relationship with the clubs, so we’re talking through that at the moment,” he said.

“The relationship side of it is key for us. What we think’s important is establishing a relationship with the club so it’s a win-win situation.

“Quade playing for [Top League side] Kintetsu, it’s a bit of a fillip for them too. They’ve got an international 10 playing in a strong side that’s being tested weekly against the best in the world.

“Making sure the relationship’s strong is important to us, because we’ve got a couple more years heading into a World Cup and want to be able to work together around that.”

“Sean isn’t available for this game. Immediately after we played on the Gold Coast, he came home, spent time with family. So he’s outside our bubble,” Rennie said.

On Quade Cooper versus James O’Connor

“They’ve tag-teamed it the last couple of Tests [at No.10], and that’s likely to happen again,” Rennie said.

“We’re fortunate we’ve got a couple of very experienced 10s in the mix. Their contribution on-field at training has been great.

“In the end, we’re going to reward who we think’s doing the best job and suits this fixture.

“As we know, the 23 is very crucial. Everyone plays reasonable minutes nowadays, so one of those guys will get their opportunity off the bench.” 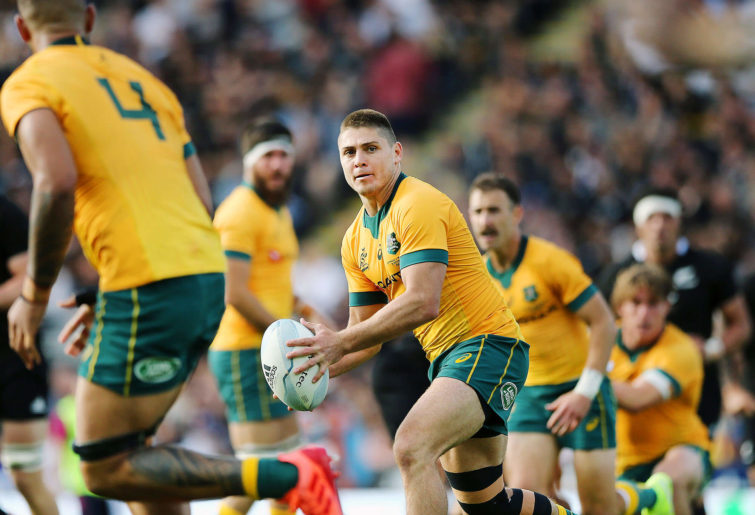 On acclimatising to Japan

“We had a pretty long haul, it was about a 30-hour trip over here,” Rennie said.

“We spent three and a half hours at the airport trying to get through from a COVID perspective, but we’ve settled in really well.

“They’re good men; there’s no complaining, we just got on with things.”

Rennie said adjusting to the Japanese humidity and high temperatures was a key focus at training. Humidity levels are forecast to hover around the 60 per cent mark for much of the week, with the Wallabies’ match on Saturday to be no different.

“We had a big session yesterday, a double day in pretty warm conditions,” said the coach.

“The boys were excellent, the attitude’s been great since we’ve been here.

“You’re expecting at 1:45 local time it’s going to be pretty warm, and we got a taste of that yesterday when we trained. But we’re a fit side as well, we think our game’s still growing and we’re really excited by the challenge.”

On Quade Cooper going back to the future

He’s still got it. A video released on the Wallabies’ social media pages on Saturday showed the 33-year old pulling out a vintage step on assistant coach Scott Wisemantel… though according to Rennie, the one-time Parramatta Eel is insisting it was all part of the plan.

“‘Wisey’ read out a text he got from his daughter bagging him this morning. He reckons he’s done the team a favour there, just building confidence.”