England coach Eddie Jones named a 34-man squad for northern winter internationals on Tuesday and one ommission in particular would have been greeted with great interest by the Wallabies.

Wallabies coach Dave Rennie, speaking last week, said he still held out hope that Louis Lynagh, the son of Wallabies legend Michael, might play for Australia despite having turned out for England at under 16, 18 and 19 level.

Lynagh, 20, also qualifies for Italy but he has yet to be locked down to a senior nation, having not played a full international.

Signs seemed to be pointing to Jones using him in the upcoming run of Tests, starting against Tonga on November 7 and which includes a battle against the Wallabies at Twickenham on November 14. But Lynagh was culled as the squad went from 45 to 34 on Tuesday (AEDT).

“Obviously Eddie’s well aware of his lineage and (the need to) catch him quickly,” Rennie said last week.

“But we’ll see how things go there, whether they use him or not over the next period and whether there’s any interest in him to come back to Australia.

Louis’ younger brother Tom has moved to Brisbane on a contract with the Queensland Reds and declared his dream is to wear Wallaby gold. A fullback or winger, Louis opted to stay in England with Harlequins. 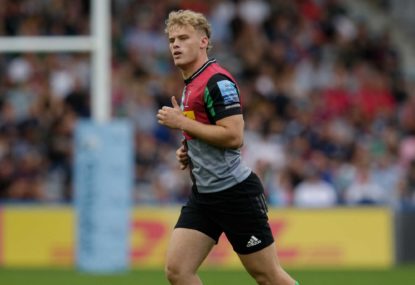 Jones, asked about Lynagh after naming his squad, said it was up to Lynagh to make a decision.

“He makes the choice of where he wants to play,” Jones said. “We think he’s a very good player, but there are things he needs to tidy up. We’re not in a selection battle with other countries to pick players.”

Jones was in typically feisty form as he spoke with brutal honesty about several other ommitted players, questioning their hunger.

He left out two-time World Cup reps George Ford, Jamie George, Billy Vunipola and Mako Vunipola, opting for a youthful group with four uncapped players and eight who made their debuts in July.

“We have a number of players who’ve been through two World Cup campaigns,” Jones said.

“With the third World Cup campaign, I’ve seen it previously, and my experience tells me, that some players can want to go to the World Cup, but they don’t really have the will to prepare to win the World Cup.

“One of the things I’m looking at is those players who’ve already been to two World Cups, whether they’ve got the will to prepare to win. We could have the most experienced side in the world at the World Cup, but whether they’ve got that will to go that extra 10 per cent and find that discretionary effort, that’s something I’m trying to find out at the moment.”

The four veterans had missed Jones’ initial 45-man squad, of which Lynagh was a member.

“I feel they need to regenerate and rejuvenate,” Jones said. “They need to add things to their game if they’re going to continue to the next World Cup.”

Owen Farrell was named captain despite questions over his place, as Ford’s absence gives Marcus Smith a chance to make the No.10 shirt his own.

The 22-year-old is one of the most exciting talents emerging in world rugby and won his first two caps against the United States and Canada in July.

“It’s a very young, but a very good squad,” Jones said. “It’s a good balance to have and we want competition for places. We’ve had a pretty settled team for the last three years and we’ve drawn the line in the sand after the Lions series. We’re looking to produce a younger squad ready for the World Cup.”