However their presence at the top leaves a gaping hole in the middle, and a lack of proven finishers remains Justin Langer’s biggest hurdle in the coming weeks.

The Marsh-Maxwell combination, below openers Aaron Finch and David Warner, appears the right move. Marsh was the shining light in otherwise disappointing tours of the West Indies and Bangladesh earlier this year, while Maxwell is coming off a brilliant IPL campaign and is Australia’s best hope of lifting a first T20 World Cup.

Early indications are that Langer and Finch will opt for this combination in Australia’s opener against South Africa. Marsh has publicly said he believes he’ll bat at three if selected, while Maxwell at four appears inevitable.

Not only did he make the position his own for Royal Challengers Bangalore in this year’s IPL, but since 2018 it is where Australia has batted him in over 70 per cent of T20 internationals.

But herein lies Australia’s key problem: who, then, bats a numbers five, six and seven?

Few of the squad’s remaining players jump out. Marcus Stoinis is the only player with some form of success as a finisher at an elite level.

Stoinis has developed his late-order hitting under Ricky Ponting at the Delhi Capitals and between 2019 and 2021 has had the fifth highest strike rate of all batsmen who bat number five to seven in the competition.

Questions remain about his ability to rotate the strike early in an innings, but it’s something he has conceded and is working on. And at least in his case, there’s no doubting where he wants to bat.

Beyond Stoinis, however, options are limited. A glaring omission to the XI mentioned thus far is Steve Smith, whose position in this Australian side is particularly unclear.

Smith, like a number of names in the 15-man Australian squad, is only really suited to batting inside the top three. This suits Smith because either the field is up during the power play, or a ticking-over role is required against spin during the middle overs.

Yet when power hitting is required in the final overs, Smith tends to struggle. During his T20I and IPL career combined, he averages just over one six every two games. That would normally be okay if he was guaranteed to bat inside the top three.

However Marsh has deservedly sealed that position. Of course, there’s the option of pushing Marsh to number five (where he has had success in the BBL) to accommodate Smith.

But Australia should not tie itself in knots to cater for one of their greatest ever Test players. T20 is a format he is not poor in, but he is far from dominant, either. 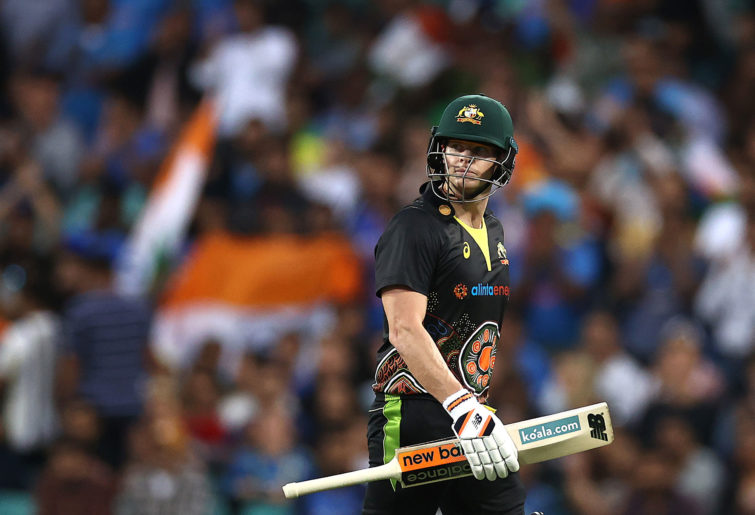 The final piece of Australia’s middle order is likely to be keeper Matthew Wade. While the uncapped Josh Inglis is a name that sticks out for some, Finch has already confirmed Wade will take the gloves (at least initially) in the UAE.

While the left-hander is a dynamic T20 opener — and may even find himself there if Warner’s form issues continue — he is quite clearly not a middle-order player. In 19 opportunities for Australia at number four to seven, his average is just 12.6 at less than a run a ball. By contrast, opening the batting his average is 23.4 at a strike rate of 144.8.

Like Smith, Wade is a top-order player likely to be pushed into the middle. But this has not worked for Australia over the years, and as a tactic is particularly fraught. To be consistently successful on the biggest stage, teams need specialist players who can go in and score at a strike rate north of 150.

Australia has precious few of these bar Maxwell, and a lack of proven finishers also puts them at a distinct disadvantage with the three favourites this World Cup. 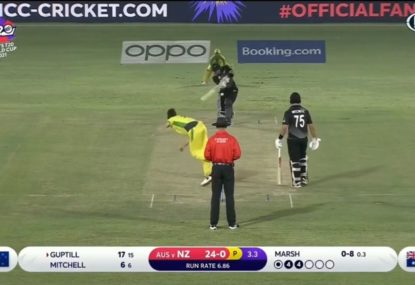 Perhaps a risky call is required this World Cup to give Australia the edge.

Could they play the uncapped Inglis? Might they leave Smith out of their best XI? Or even promote Wade back to open and push Finch down to number five (something he did very successfully albeit briefly in 2018)?

History suggests they’ll stick with experience initially. But given they will start as underdogs against both England and the West Indies, Saturday’s opener against South Africa could already be make-or-break.

Whichever way Australia goes, Langer will be desperate for a last-minute confidence boost for his middle order during the the warm-up games this week.