This has inevitably led to multiple articles about who is the GOAT and a multitude of criteria for how the GOAT should be selected.

I should add that this discussion is only about the professional era of men’s tennis (1969 onwards). I usually do not pay a lot of attention to ‘different eras’ in evaluating GOATs in other sports, but it is warranted in tennis – the split between amateur and professionals in tennis pre-1969 makes this era incredibly difficult to evaluate from a GOAT perspective.

While number of slams won is a universally accepted criterion, a range of other criteria abound by fans trying to differentiate between the Big Three for GOAT status – time at No.1, ATP Finals and Masters events won, head-to-head performance, performance at their ‘peak’, level of opposition, etc.

However, in tennis, my view is all that really matters when evaluating GOAT status is performance in the slams, and, in particular, number of slams won.

I followed tennis very closely in the 1980s and 1990s and have continued to follow it relatively closely (although somewhat less fastidiously) over the last two decades.

Over these 40 years, I cannot recall hearing the world’s top tennis players, current or former, talk about their legacies and other players’ legacies in any other terms, other than performance at the slams (with the possible exception, to a considerably lesser extent, of time at No.1).

When past or current players talk about their career-defining performances or the losses they struggled most to get over, it almost without exception, performance at the majors. When tennis followers look back at past players, it is performance in slams that tend to dominate their conversations. 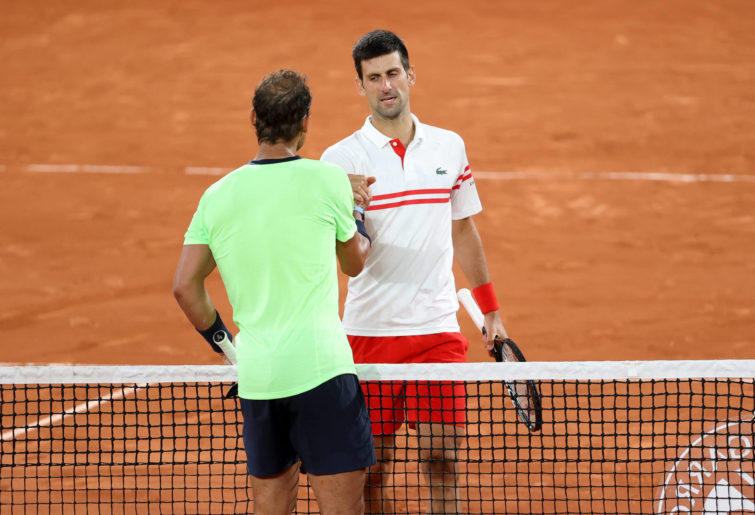 Who is the GOAT? (Photo by John Berry/Getty Images)

I suspect that most top tennis players (even among the Big Three) would define a year in which they won one slam as a successful year (I am pretty sure Pete Sampras or one of the Big Three used those exact words).

It appears to me that the top tennis players appear to try and achieve their peak performance in the slams, and even the relatively prestigious ATP Masters events are essentially tune-ups for these events.

It reminds me, somewhat, of how we evaluate performance in team events, such as the NBA or AFL – no one really remembers who won an NBA Eastern Conference semi-finals series or an AFL qualifying final or the minor premiership. They are all ‘means to an end’.

The same sort of logic applies to most of the non-slam GOAT criteria – if the world’s top tennis professionals are predominantly focused on winning slams, then their performance throughout the rest of the year is a lot less meaningful in a GOAT argument (for example, winning percentage, ATP events).

This is not to say their performance in other tournaments does not matter to them – tennis is ‘their job’ and I am sure, that like for many of us, it is important for them to still perform well on a regular, day-to-day basis.

Another factor that makes the majors so disproportionally important in evaluating greatness is the mental and physical endurance and resilience required to win those tournaments. Nothing else in tennis really compares to having to win seven rounds of best-of-5 matches in a draw of 128 players (versus, say, winning five rounds of best-of-3 matches among 32 players).

I have personally always been partial to head-to-head performance as an important secondary criterion when establishing GOAT status, but I have changed my mind on that front, as it includes consideration of performance outside of the slams.

Head-to-head performance only seems relevant, really, in the context of performance in the slams, but as will be discussed in the second article on this topic, I am now even dubious about considering that as a GOAT differentiator.

Time at No.1 may be a more important criterion than most other non-slam criteria in terms of GOAT status, but it suffers from a diluted focus in terms of my argument, since both slams and other tournaments impact on a player’s ranking points (albeit with majors having the greatest impact).

So, slams won and in addition, performance in slams, is the only way to really decide who is the modern era GOAT.

In my second article on this topic, given that the Big Three are all equal on slams won (for now), I will look at performance in slams to see if this helps to separate them in terms of GOAT status.