As England prepare for three Tests next month, Eddie Jones is facing a series of decisions that will kick start some careers and end others.

At the very heart of this is the question over who plays at No.9 and No.10, and the outcome could define a new era of how rugby is played across England.

A lot has been written about the England flyhalf topic and with George Ford not being selected in Jones’ squad earlier this week, it seems likely that Marcus Smith will be given further opportunity to drive England around the field in the No.10 jersey. Smith has had an inspiring rise to the top and his combination of skills and awareness should translate well from the club to country levels.

But as Jones explained in an interview with the BBC’s Rugby Union Weekly podcast, the flyhalf doesn’t work in a vacuum.

“It’s about combinations – the affinity between 9 and 10 is really important and how they can work with each other,” said Jones.

So who plays scrumhalf for England in this next series of Tests?

It’s a crucial decision. With No.9s such as Faf de Klerk, Aaron Smith and Antoine Dupont driving their teams forward on the world scene right now, it’s easy to appreciate that the man who plays scrumhalf has a huge range of responsibilities and influence on the success of their team.

For many, the obvious choice for England is long-serving Ben Youngs. Jones has been a fan of Youngs since 2016 with the Leicester Tigers’ scrumhalf selected in 57 of England’s 66 full internationals since Jones took charge. In doing so he’s racked up 109 caps and is clearly an incredibly experienced individual. He might not have the attacking flair of other players, but his knowledge and wisdom would be invaluable for England – especially if Marcus Smith is playing at flyhalf.

As former England scrumhalf Danny Care explained this week, “You can’t buy Ben Youngs’ experience. If Marcus plays with Ben then Ben will take a lot of the load off of Marcus and just let Marcus be free to go and roam and attack.”

Despite, Youngs’ experience, there are concerns that he represents an England that has struggled since the World Cup of 2019. A Six Nations title in 2020 as well as a win in the Autumn Nations cup the same year, couldn’t hide the growing fears that England had lost their way and their power game was dominating any hope of a more attack-minded approach.

The fears were confirmed in the 2021 Six Nations with England finishing fifth and only managing to score 112 points – with 41 of those coming against Italy at Twickenham.

While Youngs can’t be blamed for these poor results, many feel that changes in the key positions of scrumhalf and flyhalf are essential to take the team in a new direction.

There are several exciting alternatives who Jones has selected in his squad to take on the challenge.

Bristol Bears’ Harry Randall has had a very strong start to the domestic season. Before Marcus Smith changed the tide, Randall had been the primary reason why Bristol had been able to race out to a 20+ point lead against champions Harlequins recently. He mixes up his play well to keep defences guessing, and they can never be sure whether he’s going to pass or snipe around the edge of the breakdown.

???? You might need to sit down for this try ????@AndyUren9 with a never-ending, mind-bending run that literally turned the opposition inside out ????????

He and fellow 9 Harry Randall have been a revelation for @BristolBears ???? Who starts for you?? pic.twitter.com/hCLDLPZMri

He also has a great ability to pin defenders as he runs out sideways from the ruck, creating opportunities for runners to hit the line hard and break through the gaps he’s created. England fans will like the idea of seeing Manu Tuilagi in full flight coming on to a pop pass from Randall with defenders on their heels.

The 23-year-old has already had a taste of international rugby with two caps for England including a man of the match performance against the USA in July this year.

Pushing Randall and Youngs hard for the starting No.9 spot is uncapped Sale 20-year-old Raffi Quirke. Sale coach Alex Sanderson speaks very highly of his young scrumhalf. “If he stays fit he’s probably going to be one of the country’s greats,” shared the proud coach recently when speaking with BBC Radio. Quirke had just scored twice against Harlequins and bossed his team to an impressive victory over the champions and Jones clearly took note.

Having been the under-study to Faf de Klerk at Sale, it’s unsurprising that Quirke demonstrates many of the same traits. He’s got a crisp pass on him, has an excellent turn of pace over the first three metres and when he’s in the mood, he walks with a swagger that spreads confidence throughout his side. No wonder his teammates call him Faf de Quirke.

Starting it all off ⚡@raffiquirke opening the scoring for @SaleSharksRugby last night at the AJ Bell Stadium ????

What did you make of the scrum-half's performance?

Curiously Dan Robson wasn’t selected in Jones’ squad this week. Robson has been arguably the form scrumhalf over the end of last season and the first few weeks of this one, but that clearly hasn’t been enough for Jones. Perhaps the England coach feels that the 30-year-old is just a less experienced Ben Youngs and with a desire to try something new, why would he opt for that?

Jones has often drawn criticism for the way he’s dealt with his scrum halves. While starting Youngs so consistently makes sense, not developing another strong scrumhalf over the past few years has frustrated many. Robson missed out and Danny Care was dropped despite being an excellent finisher.

It means that England now find themselves in a situation where they have one scrumhalf at the end of his career and a handful of exciting prospects at the beginning of theirs and only two years until the World Cup.

As Jones highlighted – the combination of No.9 and No.10 is a crucial aspect to consider when making selections.

Marcus Smith should get the start at flyhalf and should be given a long run at making it his home. Jones’ decision not to pick Ford suggests that he believes Smith deserves this opportunity. So do you then complement Smith with a new, attack-minded scum half such as Quirke or Randall or do you follow Care’s advice and let Youngs provide valuable support and experience to the young Smith?

The conundrums don’t stop there. If you play Smith then you have to play Smith! You have to let him play the style of game that he’s best at and give him the support in terms of selection and approach.

This means that Jones has to look at the inside centre position and Owen Farrell is not the best No.12 in England and is not the right partner for Smith’s style of play. But he is the captain.

Club sides and international sides have found success with playing a strong ball carrier outside their creative flyhalf -Quade Cooper and Samu Kerevi for example found great success in the recent Rugby Championship. Smith partners incredibly well with André Esterhuizen in a similar manner at Harlequins.

Former England skipper Dylan Hartley believes that there is space for both Smith and Farrell. “I reckon just because Marcus is playing so well doesn’t mean Owen is gone. I’d like to see him play with Marcus,” said Hartley to The Times.

Farrell’s own coach at Saracens, Mark McCall, agrees and doesn’t believe it’s a case of Smith or Farrell. At a recent press conference McCall said that Farrell “has been picked at inside centre most of the time so I am not necessarily sure that is Owen’s competition, to be honest.”

He might be right that it’s not about Smith or Farrell for flyhalf. But it is about giving Smith the chance to run England in the way that is most likely to succeed and that means Manu Tuilagi at ​​inside centre, not Farrell.

World Cup winning coach, Clive Woodward agrees. “If Smith gets the nod, Farrell must go on the bench. England need a fit Manu Tuilagi – or someone with his qualities – playing 12. England must find a 10-12-13 combination that is going to frighten the world,” said Woodward in his Daily Mail column.

Going back to the scrumhalf debate – assuming Smith gets the chance to start for the upcoming series of matches, then the right approach is to have Ben Youngs start each match and provide support in the opening 50 minutes before then handing over to Randall who comes off the bench.

Come the 2022 Six Nations, Randall should start and phase Youngs out and let the Smith-Randall combination develop further as the first-choice halves pairing. Throughout 2022 keep Quirke in the squad and start to give him more and more game time as Youngs steps back.

These selection questions come at a time when there is a battle for dominance between two styles of rugby in the English club game. Clubs like Leicester Tigers, Sales Sharks and Saracens believe in the effectiveness of the forward-focused game plan that uses strong defence and an accurate kicking game to wear teams down. Meanwhile, clubs like Harlequins, Exeter Chiefs and Northampton Saints prefer to play with the ball in hand.

A decision from Jones to embrace this latter style at the international level could not only see a changing of the guard when it comes to Youngs, Ford and Farrell but also a shift in the dominant game plan in the whole of English club rugby. 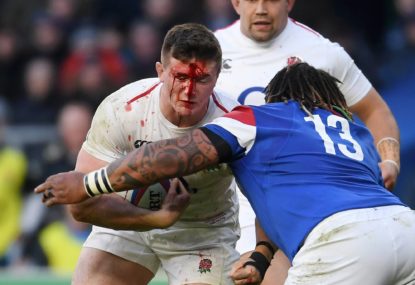