How Dave Rennie’s Wallabies are pushing the limits in contact

If there is one aspect of the game that defines Dave Rennie as a rugby coach, it is the breakdown.

If there is one area the Wallabies were hoping to improve under his stewardship, it is their work in contact. That was never a point of strength in the Michael Cheika era, but it is rapidly becoming one under the auspices of the mastermind from Upper Hutt.

Rennie has always made work at the ruck a central tenet of his coaching, in terms of both focus and innovation. As coach of the 2015 Chiefs in Super Rugby, he was the first to realise that a ruck could not be formed if there were no defenders in it.

Therefore, there was no offside line for the defence on the following phase and they were free to jump to the opposing side of the play. There is an excellent summary of the consternation caused by the Irish analytical journalist Murray Kinsella.

A couple of years later, Italy dug out the same tactic against a very flustered England side at Twickenham.

When asked by England forwards Dylan Hartley and James Haskell how England could best create a ruck, and therefore an offside line, French referee Romain Poite gave a response for the ages: “I cannot say. I am the referee, not the coach.”

Eddie Jones should probably have been pointing the finger at Dave Rennie, not Italy’s head coach Conor O’Shea after the game.

With his Wallabies preparing to play France in the decisive third Test of the summer series, it was the breakdown that was Rennie’s focus in the media.

“We’ve talked about post-tackle and they are very strong there,” Rennie said.

“I’m not saying it’s always legal and we’ll get clarification over some things there. We’ve got to be mindful we’ve got to win races and be brutal around that [breakdown] area. We cleaned out really well for a chunk of the game [in Melbourne] but we lost key moments and that hurt us.

“We spoke about it after the first Test. If you get caught on that side [of the ruck] you’ve got to roll east or west. They tend to get on their hands and knees. Other than our nines tripping over to milk a penalty, they have got no right to be there.

“[Referee] Brendon Pickerill after the first Test said [future referees] need to be strong around that. We felt [France] were able to slow a lot of our ball down in that fashion.”

At the time, I examined some of the problems the Wallabies experienced with the French in general, and centre Jonathan Danty, in particular, at the post-tackle.

With their high proportion of on-ballers, and such a big emphasis on physicality in contact situations, South Africa were always going to represent the biggest hurdle for Australia to overcome in the Rugby Championship.

It is therefore worth investigating just how well they succeeded, on both sides of the ball. In the process, the Wallabies showed that they are truly becoming a team built in their head coach’s image.

On attack, Dave Rennie wants more, much more than simply passive protection of the ball at the breakdown. He wants his cleanout players to push the envelope, and stretch the boundaries of what constitutes a ruck to the edge of legality. 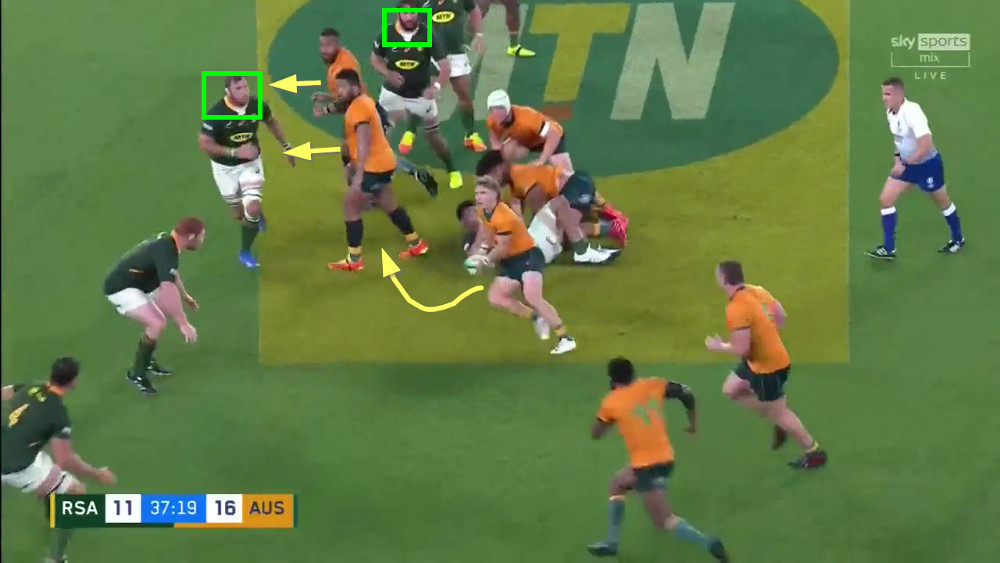 Look at the actions of Samu Kerevi and Folau Fainga’a after they attend the ruck built over a terrific run by Rob Valetini. They don’t retire passively ‘onside’, they move forward in much the same manner that a number 9 would anticipate a break with their line of running in support – ahead of the ball.

Their objective is to maintain the split between the two most likely defenders on either side of a future ruck (Duane Vermeulen and Lood de Jager) and open a pathway up the middle.

It is no accident that Michael Hooper’s weaving break goes in between those same two players.

Rennie wants the squeeze the last drop of juice out of every cleanout at a ruck on attack. 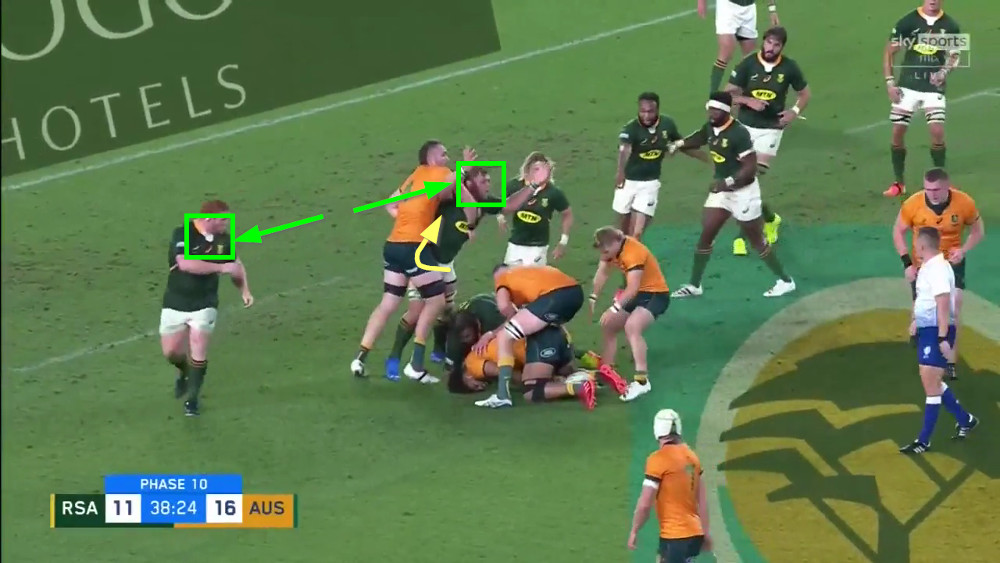 Izack Rodda doesn’t just sit on top of the ball or the tackled player passively, he moves up on Vermeulen and performs what is known in American Football parlance as a ‘wall block’. In other words, he intentionally walls off both the Springbok number 8 and the main defensive organiser around the ruck (number 9 Faf de Klerk) from the pathway of the next attacking phase.

The intended play is a reverse pass from Tate McDermott to fullback Tom Banks, and in the event de Klerk does very well to circle around from one side of the ruck to the other to fill the running lane. But the intent is crystal clear.

Australia’s breaking or scoring phases tended to contain a lot of cleanouts ‘right on the limit’. 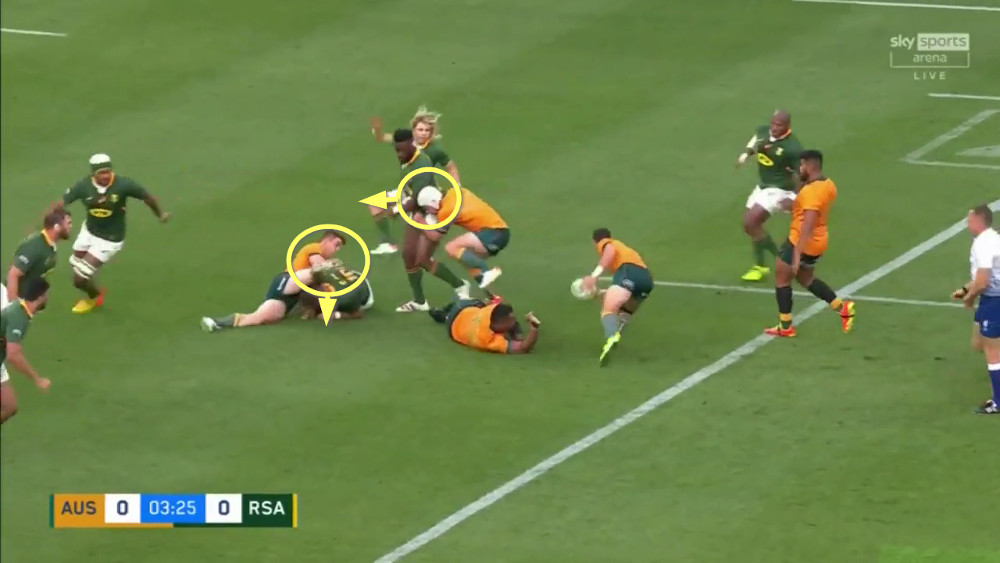 Samu Kerevi makes the bust from lineout, but the actions of Andrew Kellaway and Michael Hooper in support are also of great interest. Kellaway ensures that he takes out Handré Pollard, even though Pollard is already on the ground; and Hooper ensures that he pushes Siya Kolisi out of the intended running lane for the next phase. It’s not strictly a ruck because nobody is bound together, but it does represent positive, if ruthless attacking intent.

As the last two examples illustrate, Faf de Klerk is one of the key pieces of South Africa’s defensive jigsaw around the ruck, and he needs to be accounted for on scoring phases.

It’s a great around-the-corner cleanout by centre Len Ikitau on de Klerk – not just neutralising any threat to the ball, but burying him on the left of the ruck to open space for Tate McDermott on the right.

Deprived of its main organising voice for a couple of phases, the Springbok short-side defence had still not recovered its shape in time to prevent the scoring overlap which led eventually to Taniela Tupou’s no-look pass, and Marika Koroibete’s try. 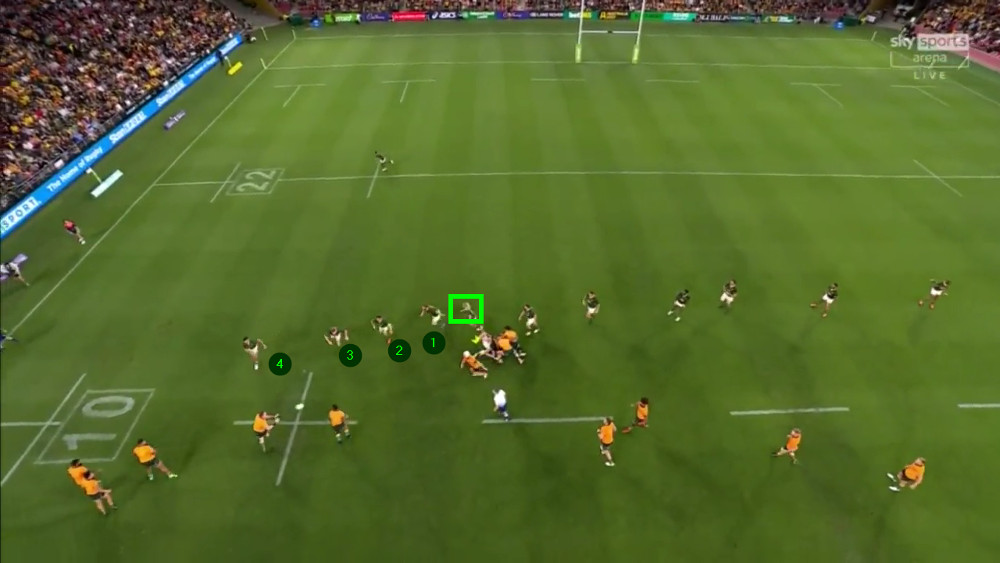 Dave Rennie and his coaches formulated an equally good plan for the defensive breakdown. Michael Hooper was a workaholic in the middle throughout the tournament, finishing top in dominant tackles (7), top in combined ruck attendances, and third in steals on the ground.

When play moved into either of the 15 metre channels, the Wallabies went to the counter-ruck against South Africa’s smaller and less powerful outside backs.

In the first two cases, the formula is very similar. The counter-ruck is led by number 13 Len Ikitau, and followed in by a back-rower (Rob Valetini in the first instance, Hooper in the second) plus another outside back (Marika Koroibete or Tom Banks).

Not only is the ruck ball slowed down, but de Klerk is knocked away from the base and cannot bring organisation to the next phase of attack.

In total, Australia either turned over or spoiled 11 Springbok rucks by counter-ruck over the two games, a massive 9per cent of their total delivery from the breakdown. Here are the two most seminal examples of all. 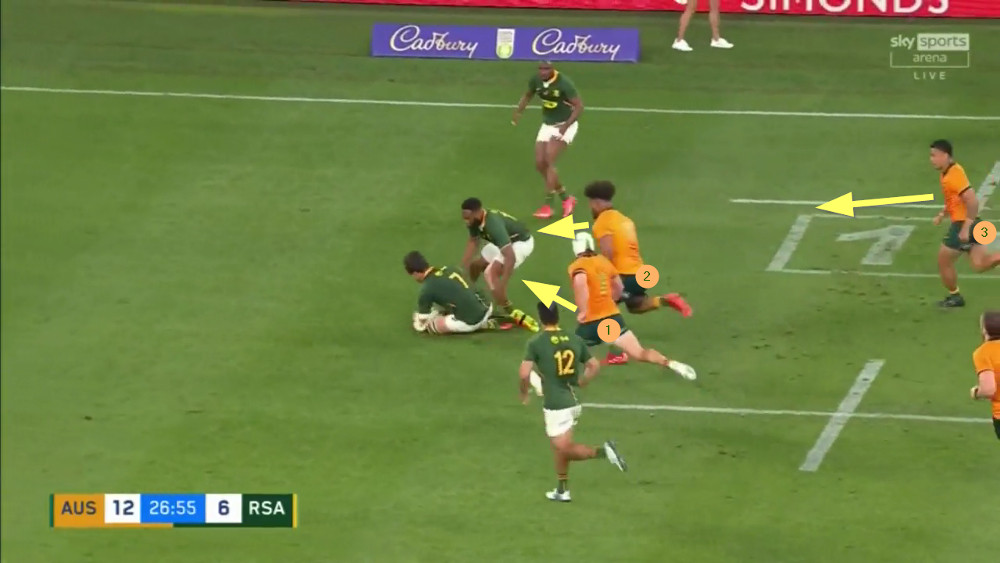 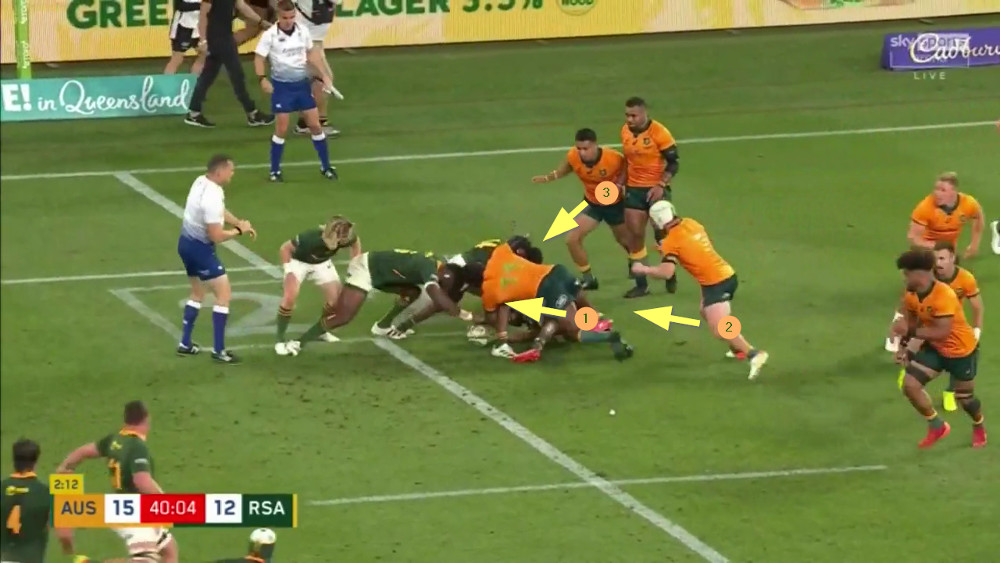 It is also notable that under the new breakdown guidelines, the ball-carrier can no longer hang on for too long on the deck, and that creates an immediate target for the counter-ruck. Franco Mostert tries to retrieve the ball and is penalised in the first example, Makazole Mapimpi could as easily have been pinged for playing at the ball twice in the second.

Dave Rennie is bringing some of the Chiefs mana at breakdown time to the Wallabies. The man who invented a previously unknown offside line at the ruck in Super Rugby is steadily moving in the right direction at Test level: pushing the envelope on attack, getting more prolonged and meaningful contact at cleanout.

Thinking about protecting the ball for sure, but anticipating the next phase of attack along the way. Finding the meaningful angles, taking out the key men on defence.

On defence, his Wallaby protégés are developing a real ferocity at the wide counter-ruck to support Michael Hooper’s on-ball ability in the middle. Powerful outside backs like Len Ikitau and Marika Koroibete are leading the charge, with able support from Hooper and Rob Valetini. Over the two games, they were far too much for their Springbok opposites.

With Tolu Latu also in the mix on the end-of-year tour, there is every chance for further improvement to be made. The lessons taught by Shaun Edwards and Jonathan Danty back in July will not been lost in the dark days of a European November. They will stand the Wallabies in good stead against the likes of England and Wales at the tail end of the most difficult season in memory.