These two sides will forever be linked due to their connection to the Hollandia Inala Soccer Club.

The Roar have taken that connection one step further this season, with an inscription and Hollandia’s logo imprinted on the inside of the jersey.

Warren Moon won the QNPL title with Lions before moving on to coach Roar in the A-League Men.

Pre-season results can be extremely deceiving but the Roar have looked imperious in all matches played so far.

They have racked up the goals for fun, beating teams 6-0 and 13-0 before comfortably getting past the best NPL side in Australia this season, Peninsula Power, in a 3-0 demolition in the the last round. 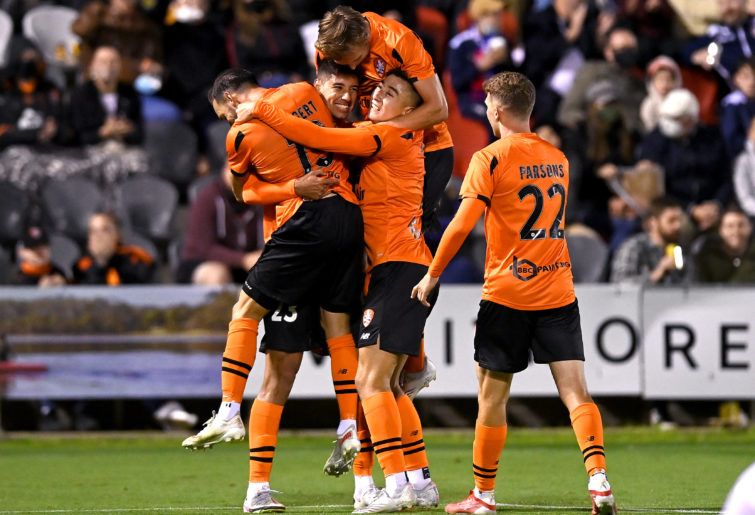 While interstate fans and pundits have written off Brisbane as contenders for this season’s A-League, this is a side that is more than capable of landing punches on the league’s heavy hitters.

Brisbane’s strength is built on their well-drilled defence, which conceding the second least number of goals last season and judging from pre-season, expect that water-tight back five to again not be leaky.

The other end of the park has always been Brisbane’s Achilles heel, though – they simply don’t score enough goals.

Juan Lescano has been brought in as the clubs No.9 this year. He is not prolific by any stretch of the imagination, but his hold-up and link play will benefit Roar’s collection of tricky, technical attacking players.

Interstate recruits Nikola Mileusnic and Luke Ivanovic, as well as ex-NPL young players Alex Parsons and Jez Lofthouse, all the have the ability to thrive either next to or behind Lescano in the attacking third and cause the Lions all sorts of problems in this match.

The QNPL season is still ongoing as several teams finish their rescheduled matches, but the Lions have already sewn up third spot in the best NPL league in Australia.

Lions were averaging nearly three goals a match, but were still unable to keep up a sustained title challenge against the teams above them – Brisbane Roar Youth and Peninsula Power.

Brisbane Roar will need to be very careful around the Lions’ midfield maestro, Max Mikkola.

Mikkola found the back of the net 22 times this season and has great experience from his time away in Spain.

He is still young enough and has the ability to be playing at a higher level. The fact that no A-League club has jumped at signing this technician is something I still can’t comprehend.

Then there are the current Lions players with connections to Brisbane Roar.

Moreton Bay prospect Finn Beakhurst has steadily been building back up to a career many through the talented ex-Roar youth player was expected to have – contributing several goals and assists.

Ex-Roar striker Jean Carlos Solorzano has netted eight goals, and Jordan Farina, who is related to an ex-Roar manager, has chimed in with over a dozen goals.

The match will be played at the Lions Stadium, which should set a new record for attendance with the Roar visiting.

Brisbane Roar will be heavy favourites to get past the Lions and advance to the quarter-finals, where tougher tests await in this side of the draw – including Adelaide United.

The ghosts of Hollandia Inala’s history will no doubt be looking over this match and smiling, as the past meets the present in the battle of Queensland.