The Roar
23rd October, 2021
67
Join the conversation
1556 Reads
Advertisement
Write for The Roar

A nervy Australian run-chase after an outstanding bowling performance saw them creep over the line for a final over five-wicket victory over South Africa to begin their T20 World Cup campaign.

Playing just his 18th T20I, player of the match Josh Hazlewood’s 2/19 off his four overs – including just one run conceded from his first two – saw him continue his outstanding IPL form on the biggest stage of all; while Glenn Maxwell vindicated captain Aaron Finch’s decision to omit all-rounder Ashton Agar with a miserly display from a rare full allotment of overs.

Only Aiden Markram (40 from 36) stood up to the onslaught with the bat, the largest Protea partnership 34 runs as the Aussie attack, backed up by a typically excellent fielding performance, strangled the life out of the innings. Markram, plus some late hitting from Kagiso Rabada (19 off 23, including a towering six off Starc), at least ensured the Proteas would reach triple figures.

But chasing just 119, the victory is hardly the confidence-booster the Australians’ bowling innings had it destined for, the men in gold once again showing the batting brittleness that saw them continually fall short of small run chases in a 4-1 series loss to Bangladesh earlier this year.

But Matthew Wade and Marcus Stoinis both held their nerve; each given a life by the Proteas in the field before a nerveless trio of boundaries by Stoinis at the death sealed the victory, and avoided setting an embarrassing record for the lowest defended total in T20 World Cup history.

>> Australia vs South Africa: as it happened

After Finch won the toss and elected to bowl, the sight of his strike bowler Mitchell Starc being clattered for two imperious first-over fours by Proteas captain Temba Bavuma could only have been seen as an ill omen.

But from the moment Maxwell vindicated the captain’s decision to hand him the new ball by castling the opener for 12 in the next over, it was nothing short of a rampant Australian performance with ball in hand.

Dismissing Rassie van der Dussen with his first ball was vintage Hazlewood: back of a length, hint of seam, the outside edge of a tentative batsman. It was the sort of ball that has made him such a fearsome opponent in Test cricket, and he seldom relented from there.

Josh Hazlewood takes Player of the Match honours for his 2-19 from four overs #T20WorldCup pic.twitter.com/oVuS8CayYr

So mesmerised was Quinton de Kock by the New South Welshman’s metronomic accuracy, he would simply watch as a ball arced up off his thigh pad, bounced twice, and trickled into his stumps. It spoke volumes.

>> WATCH: The weirdest dismissal of the World Cup? 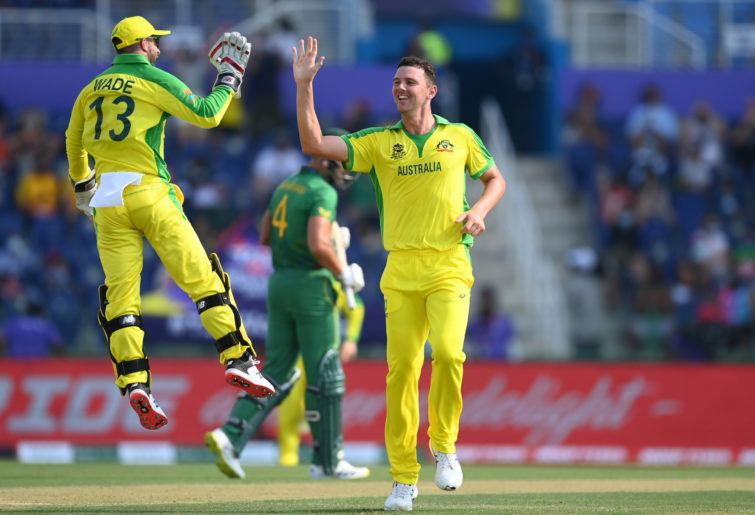 The last time Hazlewood, Pat Cummins and Mitchell Starc played together in a T20I was way back in 2012… for the Sydney Sixers in the now-defunct Champions League T20. From the evidence on display in Abu Dhabi, the fact they’ve never lost a match as a threesome in the format is no statistical quirk. Remarkably, despite never posing quite the same threat, Cummins was even more miserly than Hazlewood, conceding just 17 from his four overs and picking up the dangerous Heinrich Klaasen to boot, proving Finch’s decision to drop Agar after an expensive pair of warm-up games for the three Test quicks spot-on as a consequence.

Equally effective were spin twins Maxwell and Zampa; the former’s frustration at a loose final ball pounced on by Markram hardly needed, such was the quality of the 23 preceding it. Finch had gambled on getting four overs out of all-rounders Maxwell, Mitchell Marsh and Marcus Stoinis: the latter two, it transpired, were surplus to requirements. As for Zampa, a pair of wickets in his third over – one of which triggered a candidate for the most optimistic LBW review of the tournament from a trapped David Miller – were just reward for a canny performance from the leg-spinner.

The Proteas’ spluttering innings reached its nadir when tailender Keshav Maharaj and Markram combined for a comical run out; after an initial mix-up saw a shy at the stumps miss, an aborted attempt at an overthrow saw Maharaj slip mid-pitch, sealing his doom as Maxwell found Wade at the stumps. Coach Justin Langer’s gleeful expression summed up the mood as a big victory loomed: but once again, the Aussie batting performance was far from as clinical.

While his captaincy couldn’t be faulted, a duck from Finch in his first innings of the tournament, guiding the speedy Anrich Nortje to third man, sent an early shiver through the Australian camp. Opening partner David Warner, despite a pair of sublime boundaries off Rabada, failed to make a score big enough to shake off his form slump, caught at backward point for 14.

When Mitchell Marsh holed out having once again proved his weakness against spin bowling, trouble was brewing. It took a typically composed innings from Steve Smith, alongside an uncharacteristically subdued Maxwell, to steady the ship, if not lift the run rate.

The Proteas weren’t about to die wondering, though. A sensational catch from Markram in the deep saw the back of Smith, and appeared to have swung the match when Maxwell’s trademark reverse sweep proved his undoing, clean bowled by the wily spin of Tabraiz Shamsi.

Needing nine an over with Stoinis and Wade new to the crease, the Aussies seemed in serious trouble. But the pair held their nerve, Stoinis securing victory with a pair of final-over boundaries as the Proteas, left with no option but to finish with fifth bowler Dwaine Pretorius after going for broke with Rabada earlier, rued a near miss.

Having hit the ground running, Australia take on qualifiers Sri Lanka on Friday morning in their second match of the tournament.