Fans calling for Andrew Kellaway to be tried at fullback got their wish early, with Reece Hodge forced from the field with a nasty pectoral injury. Coach Dave Rennie has done well to develop depth, but fullback is the exception that proves the rule.

While Kellaway once again did his burgeoning reputation no harm, it’s less than ideal to be heading into the UK Test matches without a specialist custodian. There will be temptation to keep him there, but the experience of James O’Connor is a more probable option – assuming Hodge remains out of action.

Another possibility is for Rennie to put in a call to Kurtley Beale – assuming Beale has his mobile phone back – but even if the cupboard is currently bare, there doesn’t feel to be any genuine appetite for that emanating from the Wallabies’ camp.

Despite a bright opening and obvious set-piece dominance, the Wallabies only muddled their way to a 17-14 halftime lead, courtesy of inaccuracy and what Rennie would later describe as “rust” manifesting itself in turnovers and penalties conceded.

The second half started more convincingly, a slick lineout variation delivering a try for Taniela Tupou, before a great team try took the margin out to 27-13. Among the contributions were an excellent high catch by Kellaway, a superb transfer by Len Ikitau, a chip regather by Nic White, a sweeping clearance from halfback by Taniela Tupou, and a behind-the-back pass from Quade Cooper, before Rob Leota finally finished things off in the corner. 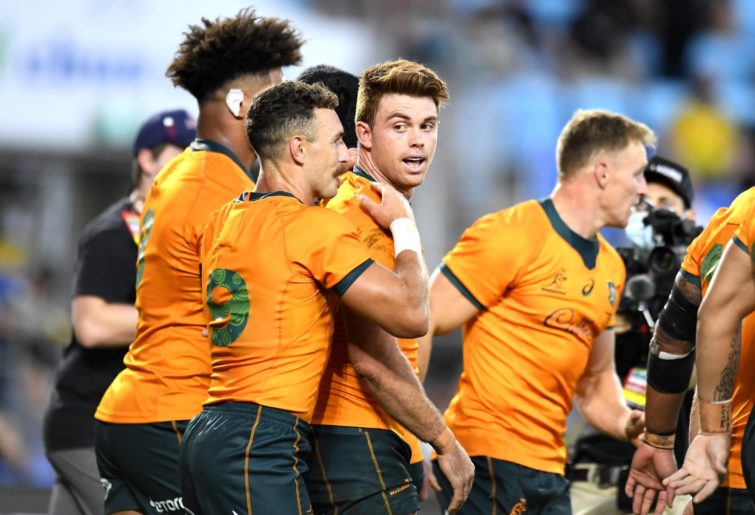 Cohesive play was only sporadic after that however, the Wallabies guilty of poor option-taking, trying too much from the wrong parts of the field, and not kicking enough, to force Japan to play out from the back under pressure.

In a season of intercepts, the dolly offered up by Cooper to Ryoto Nakamura in the 56th minute was quite possibly the worst. The effect was to tighten the nerves, leading to a 68th minute decision to kick for goal from a penalty that, in any other match against Japan, would have been punted to the corner.

If there was ever any doubt that Test matches against Japan are now deadly serious affairs, it was gone in this moment. Cooper’s kick cannoned off the upright, and when Yu Tamura nailed a 45m penalty five minutes later, closing the margin to four points, things had indeed gotten serious.

But debut hooker Connal McInerny kept his composure at the back of a maul, and the Wallabies, rust and all, had their win, 32-23.

That’s a positive right there, chiselling out a fifth win on the bounce, as was the set-piece, and some impressive high catching at the back. But if expectations for the UK swing are going to be met, the Wallabies are going to have to allocate extra resources at the breakdown, and be more physically present and accurate, to ensure faster and cleaner recycling.

Japan was rusty too, passes going to ground early, and their lineout failing them too often, at important moments. But they also had many good periods in possession and applied enough pressure in the midfield that the Wallabies – apart from some delightful play by Cooper at the line to send Tom Wright through for his try – were never allowed to break free.

Afterwards, Michael Hooper wasn’t buying into the discussion about bringing Japan into the Rugby Championships, although Rennie made it clear that he’s a fan of the idea. Regular readers of this column know that I think it can’t come soon enough, although I’d make Japan’s entry conditional upon banning the crowd from the clapping and slapping that came through on the TV audio feed as annoying static.

The audio from Washington was fine, even if the visuals were a little hard on the eye; the All Blacks and USA Eagles looking like they were playing on a giant sheet of graph paper.

The scoring action started early, with the All Blacks going coast to coast from the kick-off, for Luke Jacobsen to notch the first of what would be a whopping sixteen tries. Indeed, for long periods, the match resembled an opposed training session for the All Blacks; the rest of it resembling an unopposed session.

Most of the tries came from long range, with the USA surprisingly matching the All Blacks for territory; although almost certainly some of that was due to them kicking off so often.

If that sounds disparaging, it’s not meant to. There was a lot of good rugby played, even allowing for the class disparity between the sides. One highlight was Richie Mo’unga’s 26th minute try, where he showed remarkable balance to retain his footing and momentum, aided by cleverly using his mullet as a keel.

Another highlight was USA halfback Nate Augspurger being sling-shotted through a gap to score the USA’s first ever try against the All Blacks. They would double the tally in the second half, to take a little bit of sting out of the 104-14 final result.

A word too for referee Angus Gardner, making his return to top-flight rugby after a long, enforced lay-off. This won’t be the toughest Test of his career, nevertheless it was great to see him back with the whistle, and his relaxed, non-domineering approach to proceedings was perfect for the occasion.

Predictably, conversation afterwards turned to the worth of international fixtures where one side is so mercilessly hammered as this Eagles team was. It’s actually quite a complex, nuanced issue, with an obvious, but albeit improbable, solution. 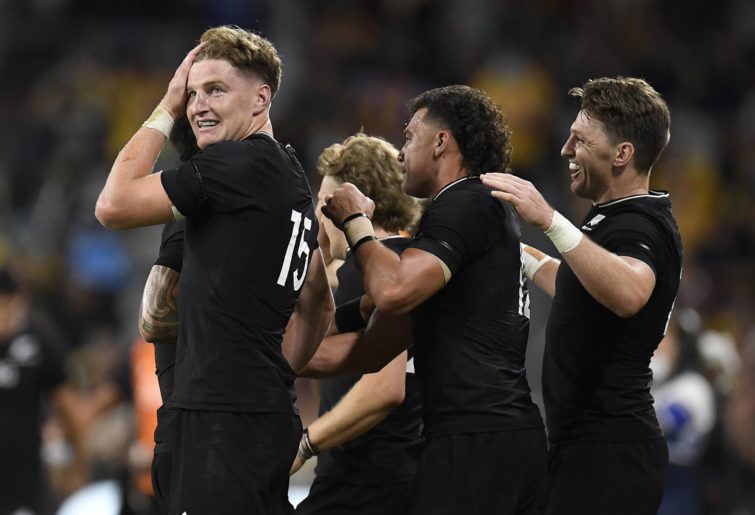 When tier-one sides don’t play the lesser lights, there are inevitably claims around arrogance and not doing enough to support developing nations. But it is true that playing such matches when the already weaker side is weakened even further by the unavailability of some of its best players, is bordering on nonsensical.

There’s also the matter of New Zealand Rugby burnishing the All Blacks’ brand on the global stage, and they’re no different to any business in any sector, seeking to leverage a return on their assets. Be clear, if one match like this per annum is the difference between keeping Aaron Smith and Richie Mo’unga at home or not, then it’s no contest; ‘play on gentlemen’.

Concerns for the vanquished were raised, but they are misguided. Anyone who has played rugby for long enough will have been on both sides of a blow-out scoreline. Regardless of the final score or ease of victory, there is never anything less than respect paid out in both directions.

Rather than be psychologically harmed for life, the USA players all know that they are capable rugby players. They just simply happen to be on a different level to the All Blacks, and I guarantee that none of them would trade the experience.

There was also commentary about the result demonstrating how the USA are not fit to host the Rugby World Cup they have put their hand up for, in 2027. But I’m not sure an under-strength team being spanked by the All Blacks should disqualify anybody, and it is for other reasons that their time should come a bit later, say in 2031.

In short, central rugby administration in the USA is in no condition to be entrusted with the game’s flagship event. They are certainly nowhere as advanced as Japan was, and even then, Japan 2019 was a massive logistical exercise on the part of World Rugby, to ensure that things ran according to plan.

It is true that football gained enormous momentum after hosting the 1994 FIFA World Cup, (they are hosting again, along with Canada, in 2026), but grassroots participation levels and the professional soccer league already far exceeded what USA rugby can lay claim to today.

Another concern is infrastructure. There are numerous, wonderful stadiums across the nation, but like the Washington Stadium, almost all of them are uncomfortably narrow, and don’t provide for standard-length, in-goal areas.

Their time will come, as it must, if rugby wants to be truly accepted as a global sporting powerhouse. But the bigger priority right now, is to help make them, and other nations ranked 11-25, more consistently competitive. (And before our Chilean readers complain about me disrespecting their 26th-ranked team… you know what I mean).

The solution rests with the age-old problem of the construct of a fixed global season, which would provide enough surety for New Zealand Rugby and other leading nations that they don’t need to go chasing matches outside of the fixed period, and which would allow developing nations to prepare properly and select their best players.

Given that the national unions, through World Rugby and with World Rugby, have not been able to come together cohesively, let alone broker an agreement with the LNR (French clubs) and the English Premiership clubs, suggests that this remains a forlorn proposition.

The great white hope however, is private equity. Maligned and feared for various reasons, it would be ironic if a bunch of moneyed outsiders were able for fix what everyone inside the game has been unable to. Networks will be worked, meetings will be had, and deals will be put on the table.

Whether anything fruitful comes of it or not is another story, but you can bet USA coach Gary Gold will be one who will be backing it in.

The match was preceded by a moving gesture by the USA team and an emotional haka by the All Blacks, in memory of New Zealand Maori and Chiefs player, Sean Wainui. A similar tribute was led by Nehe Milner-Skudder and Teihorangi Waldron prior to the Taranaki v Manawatu match on Saturday.

Enough words have been written about Wainui’s tragic passing last week to render any contribution here inconsequential. But it is always heart-warming to see the rugby community come together in times like these; a point acknowledged by Wainui’s family, yesterday.

Finally this week, a shout out to Argentinian prop Thomas Gallo, for his effort playing for Benetton against Llanelli Scarlets. Gallo knows how to find the try-line, nabbing a double in his Test debut for the Pumas against the Wallabies at the Gold Coast, three weeks ago.

But check out his 30m pick and dash, and thumping finish in this match, and tell me this isn’t a young 22-year old prop with a rare talent and a huge future in the game.