Afghanistan appeared unperturbed by their uncertain future in international cricket as Mohammad Nabi’s men dished out a 130-run drubbing to Scotland in Group 2 at the Twenty20 World Cup on Monday.

The governing International Cricket Council will meet next month to determine the game’s future in Afghanistan under the Taliban regime.

Cricket Australia has already threatened to scrap next month’s one-off Test against Afghanistan if the government in Kabul does not allow women to play the sport.

None of that controversy seemed to affect Afghanistan as their muscular top order fired them to an imposing 4-190 in their opening Super 12 stage match.

Spin duo Mujeeb Ur Rahman (5-20) and Rashid Khan (4-9) then combined to demolish Scotland for 60 in 10.2 overs to maintain Afghanistan’s 100 per cent victory record against them in this format. 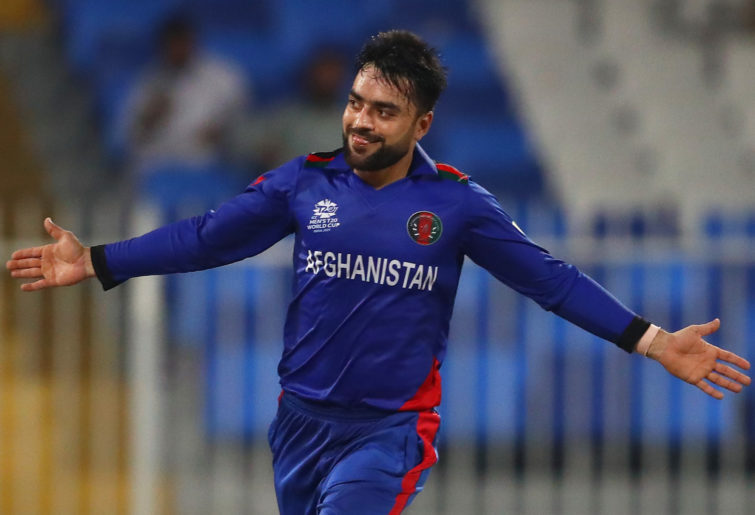 Five batters were out for ducks, three of them first ball, and only George Munsey (25 off 18 balls) scored more than 12.

“This was our plan, to bat first and put a big score,” Nabi said after their biggest Twenty20 victory in terms of runs.

“Everyone knows Rashid and Mujeeb are among the best in the world. It’s a really nice team and hopefully we’ll keep winning.”

The Afghan openers vindicated Nabi’s decision to bat first after winning the toss at the Sharjah Cricket Stadium.

Hazratullah Zazai, who made 44 off 30 balls, and Mohammad Shahzad (22 off 15) got them off to a flier with a 54-run stand and Afghanistan’s batsmen never took their foot off the pedal after that.

Rahmanullah Gurbaz blasted four sixes in his 37-ball 46 but, like Zazai, fell short of his half-century.

Najibullah Zadran could not be denied his 50 though and the left-hander smashed 59 in 34 balls before falling to the final delivery of the innings.

Afghanistan’s batsmen smashed a combined 11 sixes, several landing on the roof of the stadium, much to the delight of the smattering of Afghan fans in the stands.

“We have been playing some good cricket to get here, but sometimes things don’t go to plan,” Scotland captain Kyle Coetzer said after the thumping.

“We fought hard in the field. It’s just a level check to see where our standards are. We’ll be better for it in the next game.”