After a few plays in which he has been taunted and humiliated by his opponent, Oher picks him up and carries him 50 yards downfield on a scoring play, and deposits him in the bleachers with his feet in the air.

He ‘takes out the trash’ with a vengeance. The side-judge throws a flag, and a conversation ensues.

In real life, Oher went on to enjoy a stellar career as an offensive tackle in the NFL, winning a Super Bowl with the Baltimore Ravens in 2013.

Excessive blocking is a neat description of the breakdown techniques examined in last week’s article. It means getting as far beyond the midpoint of the ruck as possible, and making prolonged contact with the enemy in order to open up a fissure down the middle of the defence. A gap that stays there, ruck in and ruck out.

The ability to use it consistently provides a short-hand answer to the question: who won the battle at the breakdown?

Where the Wallabies were doing most of the serving in their double-header against South Africa, they were for the most part served up at the ruck by Japan in Oita.

“We were pretty good early on but I thought we weren’t so great late in the game. Some of that comes from over-play. Some of it was entry – poor decision making from an individual perspective,” Dave Rennie said after the game.

“We’ll tidy that up. We’re just a little bit rusty around a couple of areas, we’ve done a lot of work around our carry clean[-out] and we’ve just got to be better.”

Japan are also coached by two Kiwis (Jamie Joseph and Tony Brown) with much the same outlook as the Wallabies’ head coach himself, so the battleground in Oita was set. Who could cleanout excessively, and yet stay within the limits of refereeing tolerance?

Japan have clearly won their mini-battles in this extended sequence. In the first instance, they have opened up the left side of the first ruck completely to allow a heavy forward to run at a small Australian back (Nic White) on the next phase. 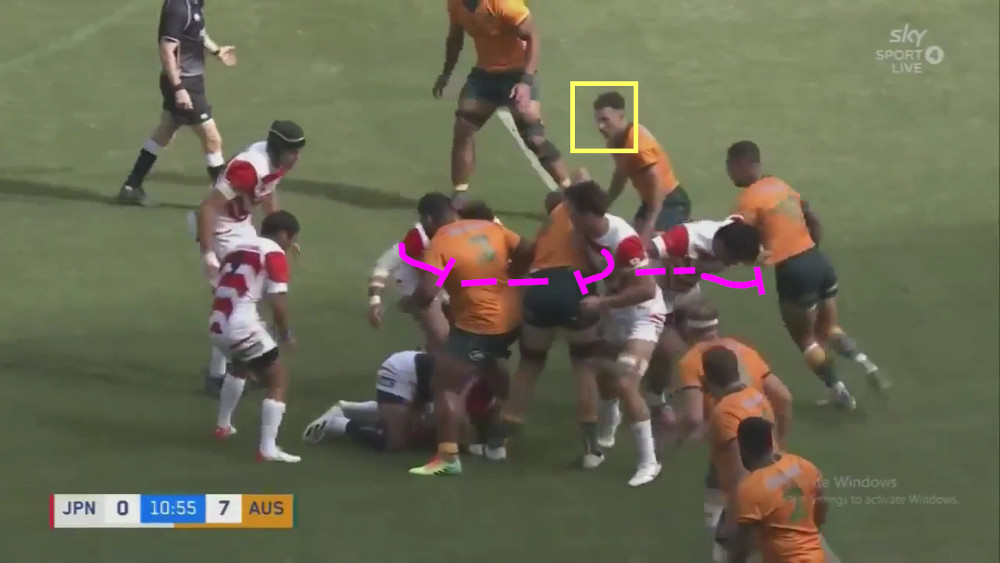 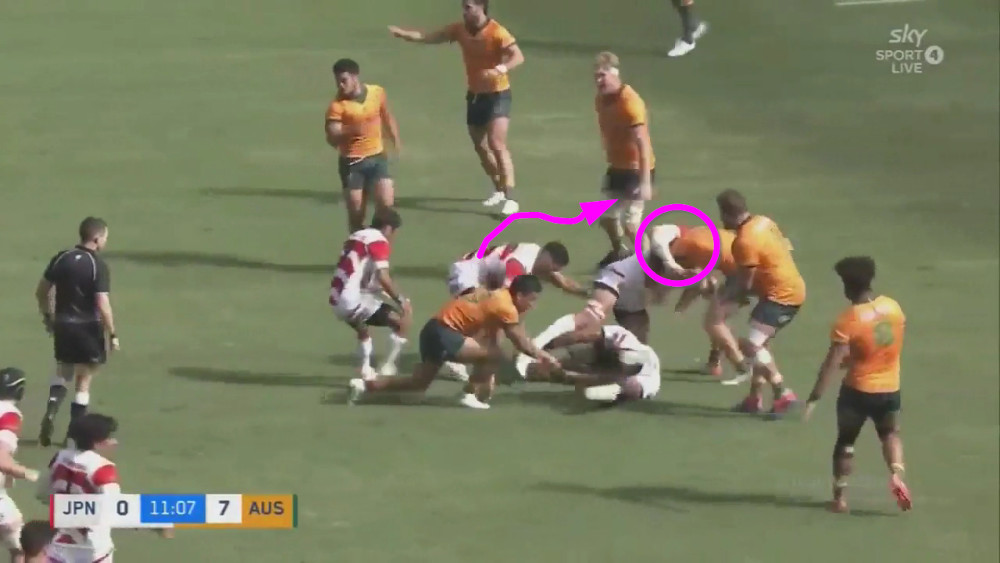 The Wallabies were not so lucky.

Tom Wright follows his block too far around the corner for Paul Williams’ liking and is pinged for illegal entry.

The cleanout over the first run opens up a seam between the two Guards at the side of the ruck (Angus Bell and Darcy Swain) and it is that gap the Brave Blossoms look to penetrate on the following phase. 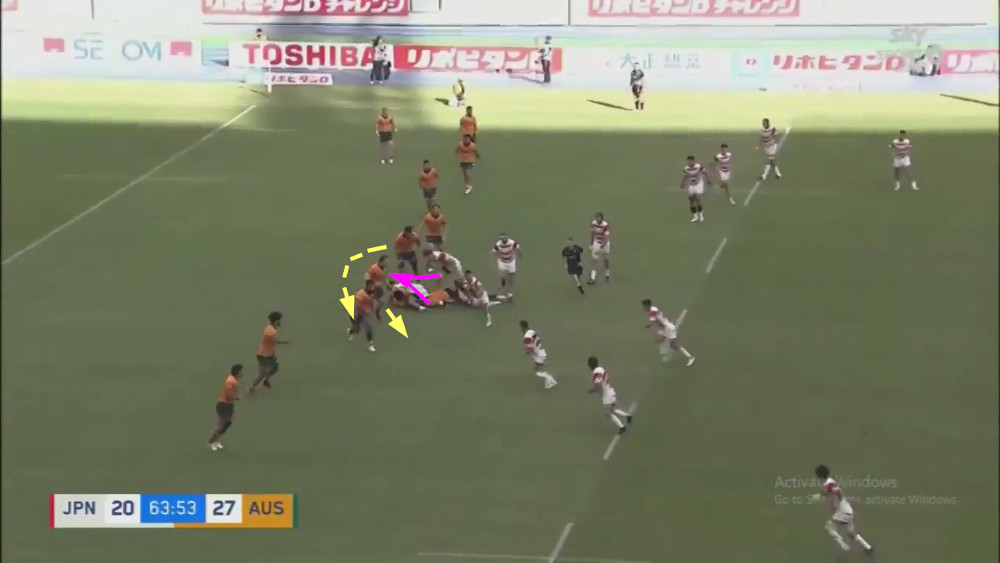 A couple of phases later, they tried to implement another ‘wall block’ on Hunter Paisami, to create an avenue for the pick and go.

Although the Japanese were on the receiving end of a shrill blast from Williams’ whistle for no release of the ball on the deck, it is clear who were the real aggressors at the tackle area and events beyond it.

There were other areas of ‘excessive blockage’ for Australia. The Wallabies never came close to replacing Samu Kerevi’s presence and productivity on attack, even though Rennie was complimentary about Hunter Paisami’s endurance and contribution on defence after the game.

“We were really happy with Hunter,” said Rennie. “He played 80 minutes which wasa great effort. He was strong. He was strong defensively. He’ll be so much fitter for a run. He’s had a really good week of preparation.”

Those comments cannot be used to camouflage the huge hole Kerevi’s absence left in the Australian attack. Paisami ran seven times in Oita, for a total of 13 metres with no offloads or breaks. Kerevi finished top of the pile in the number of runs, total metres and successful offloads executed in the Rugby Championship.

That translates as an average of 13 runs per game for 117 metres, with 1.6 offloads, one clean break and 4.1 tackle busts. Oita was just too much of a drop-off in production.

The following second half example illustrates the domino effect of a negative first phase on the rest of the sequence.

Hunter is cut down hard on first phase, the cleanout support has to go back to re-ruck over the top of him, White fumbles because the ruck is so short, and Michael Hooper has no chance on the following play.

The outcome was that Quade Cooper ended playing around Paisami rather than through him, with passes increasing in length and the search for width arriving far earlier in the phase count than it had with Kerevi in place.

“[We were] rusty and fairly frustrating,” Rennie said.

“We played a lot of good footy but we just didn’t kick the ball enough. There was a lot of space where we could apply pressure but we tended to over-play.”

Even in one of the Australian scores, it became obvious that Paisami was not a realistic option to receive the ball. 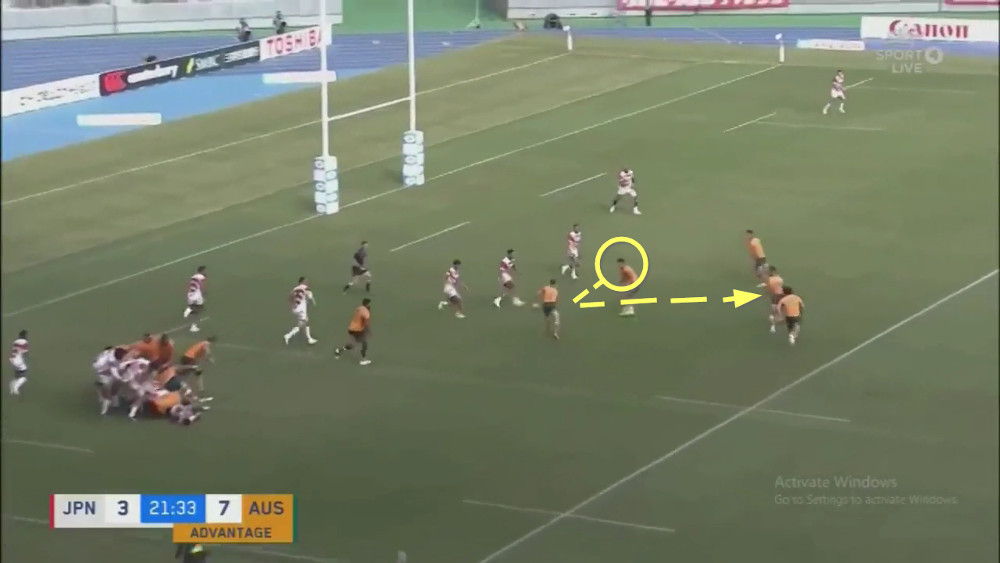 Paisami’s positioning is flat and static, so the ball has to go to behind from White to Cooper. Quade throws a nice cut-out pass off his left hand to create space for Andrew Kellaway to put Jordan Petaia in at the corner, but over the piece the results of skipping either one or both centres were decidedly mixed.

There is nothing ‘on’ to justify the long pass from Cooper, but a great bit of excessive blocking by Kellaway opens up a route ahead for Len Ikitau and White down the right side-line.

At other times, the hearts of Wallaby supporter jumped into their throats, with some unwelcome reminders of the interception rate in the Bledisloe Cup series.

As Rennie commented, “We played a lot of rugby in between the ten-metre [lines], and certainly late in the game we got penalised a fair bit around there and even the intercept we’ve got a four on one, we’ve just to give to the guy next to us.” 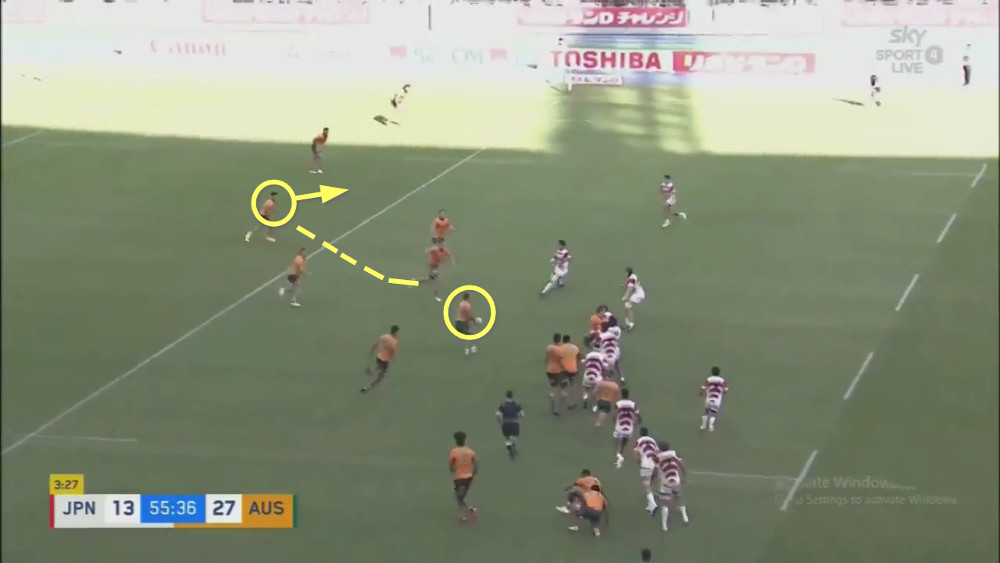 Quade wants to reach Paisami with the cut-out pass, but Hunter is shaping out and away from him, where Kerevi’s first instinct would undoubtedly have been to come shorter, and provide an easy target. The synergy was completely different.

With two New Zealand head coaches in Jamie Joseph and Dave Rennie going head-to-head, there was plenty of excessive blocking on view in Oita, with Japan edging the battle at ruck-time. There are some quick fixes for Rennie in that aspect of the game. Of more concern was the excessive blockages in his midfield.

Replacing the outstanding inside back in the Rugby Championship, and quite probably the best power midfielder in the global game at the moment, did not prove to be an easy task in the opening game of Australia’s end of year tour against Japan.

Samu Kerevi’s work rate and productivity in attack would be very difficult for even New Zealand or South Africa or England to replicate with their first choices available, and it became clear that the Wallabies cannot hope to play the same way without him. 13 runs for 117 metres, five breaks and almost two meaningful offloads per game do not appear out of thin air.

Hunter Paisami made a long-anticipated re-appearance after leaving the squad for birth of his first child at the end of August, but a big question-mark remains about whether he can achieve the same kind of figures, even on his best day.

Without Kerevi alongside him, Quade Cooper began to over-play his hand – lengthening passes and looking for width earlier on attack. Although he still came out in credit, sterner Tests await, and Wales, England and Scotland will all have done their due diligence. There is simply nobody anywhere who can match Samu’s Kerevi’s combination of breaking ability and thirst for work, and he cannot come back soon enough.