The Roar
28th October, 2021
9
Join the conversation
Advertisement
Write for The Roar

A who’s who of football legends have expressed their praise and admiration for Adelaide United player Josh Cavallo, after he courageously came out on Wednesday.

The 21-year old became the first A-League player, and one of just a handful around the world, to be openly gay, after posting a lengthy statement and video to his Twitter account.

Past and current champions – and some of the world’s biggest clubs – have since expressed their support en masse across various social media forums, as the football world unites behind Cavallo.

England and Aston Villa star Tyrone Mings led the charge among the current crop, describing Cavallo as ‘absolutely brilliant’; while football icon Zlatan Ibrahimovic wrote: “You are a champion. Football is for everybody. Big respect.” Their show of support were two among hundreds, as everyone from Manchester United goalkeeper David De Gea to reigning World Cup winner with France, Antoine Griezmann, sending Cavallo messages of support.

Barcelona veteran Gerard Pique hoped the Australian will bring about changes in attitudes towards LGBTIQ people in the sport, Tweeting: “The world of football is far behind and you are helping to move us forward.”

Hey @JoshuaCavallo, I don’t have the pleasure to know you personally but I want to thank you for this step that you take. The world of football is far behind and you are helping us move forward. https://t.co/pe8xdJl15i

Absolutely brilliant. I admire your strength of character to be proud of who you are. We’re all with you. I’m sure you’ve inspired many, many people with this ???????? https://t.co/Xfobm4Kk8C

I know this took a lot of courage Josh. Know that the entire football community stands with you. Enjoy this freedom now, enjoy your peace. So much respect for you brother ????????????????@JoshuaCavallo https://t.co/A3eFubgPlr

Huge respect to Josh for doing this. It’s courageous and shares an important message that everyone deserves to be themselves no matter what. https://t.co/f3KEr5Pjxp

Big respect for @JoshuaCavallo. Football is for everyone ????????❤️ https://t.co/0qncbztso8

Brave and inspiring, always be yourself. https://t.co/yavVezLaYV

Former greats of the game were also quick to praise Cavallo, with England legend Gary Lineker saying he is ‘full of praise’ for the Aussie. “I’m sure the overwhelming majority of football lovers will support him and erase the fear others may have,” the 1990 FIFA Fair Play Award recipient wrote.

He wasn’t alone, with other retired champions from Rio Ferdinand to Robin van Persie joining the chorus of acclaim.

It’s absurd that coming out is a brave thing to do in football. It is though, and I’m full of admiration for Josh for treading a path hopefully many others will follow. I’m sure the overwhelming majority of football lovers will support him and erase the fear others may have. https://t.co/iDvg67qN7s

What an inspiring young man!
Thank you for your courage, everyone has the right to be themselves.
Just stay yourself and enjoy the life you choose to live ❤️ https://t.co/b1EO3X7sdt

Support for Cavallo wasn’t just restricted to players; a host of the biggest clubs in world sport have united behind the 21-year old, from Premier League behemoths and the League itself:

Proud of you @JoshuaCavallo for your strength and bravery.

We admire your strength to pave the way, Josh.

Proud of you, Josh. Thank you for your courage. ✊

… to giants from across Europe…

THANK YOU, @JoshuaCavallo, for taking a huge step forward! Your courage contributes to normalizing diversity in the world of sports. ????️‍???? https://t.co/5HvCnwy8PI

Josh, we admire your courage and strength. We hope you continue to inspire more people to live their truth. https://t.co/AXeJQSxzbV

Proud of you, Josh! ???????? #DifferencesMakeTheDifference

… and even made it all the way to the Americas.

Thank you for sharing your strength and courage, @JoshuaCavallo. ❤️ https://t.co/OrSnXctAo5

No one should be afraid to be themselves. ????

Thank you @JoshuaCavallo for being yourself and inspiring millions. ❤️ https://t.co/dMZzTsxneg

You no longer have to hide who you are @joshuacavallo. You are not alone, as the football community around the world today has shown.

We are very proud of you. Your words will be an inspiration & support to so many.pic.twitter.com/VifFoLIZS8

The support even extended beyond the world of sport, with US talk show host Ellen DeGeneres, a noted LGBTIQ activist whose own coming out in 1997 sparked far less universal support, ‘sending… a whole lot of love’ to Cavallo.

.@JoshuaCavallo is the first top-flight professional footballer to come out as gay. I’m sending him a whole lot of love today. https://t.co/Yh6dRUJHXB

Even perpetually controversial English presenter Piers Morgan could only find good things to say about Cavallo, saying bluntly: “Anyone who has a problem with it or wants to taunt you about your sexuality is not a real football fan.. or anyone worth bothering about.”

Well done, Josh. All real football fans will be happy for you & very admiring of your guts in doing this.
Anyone who has a problem with it or wants to taunt you about your sexuality is not a real football fan.. or anyone worth bothering about. https://t.co/OkbXMNBpV9

Closer to home, Cavallo’s coming out has been met with Australia-wide support, from his Adelaide United brethren…

What a man. Your @AdelaideUnited fam is behind you ❤️ https://t.co/2Mc39s2wcq

You’ll be a shining light for many future generations of footballers ????????#SydneyIsSkyBlue https://t.co/tTPVrj8q2K

Our Wanderers Family stands by you Josh and all that you represent ❤️???? #WSW https://t.co/kAxLbOYift

… and even to the AFL, the A-League’s long-time rival putting aside any enmities to stand with Cavallo.

Thank you for your courage and truth @JoshuaCavallo.

There's no doubt you will inspire countless others, just by being you. ????#weflyasone https://t.co/VqNRcacRuK

We always say everyone is welcome at the football ????

Thank you for being so courageous Josh. Let’s all continue to celebrate diversity and ensure everyone feels respected. https://t.co/4YxIvWTJzP

Thank you for having the courage to be yourself and tell your story, Josh. https://t.co/FDjgeTfuVq

Your strength and courage will help more people live their truth. https://t.co/HQTZ1l8LEV

No one should have to hide who they are and the ball doesn’t care about colour, race, religion, gender, sexuality..

Just how you play.

That should be life.. all the best this season.

From your new fan. https://t.co/kThe9XimA3

The Socceroos stand shoulder to shoulder with Josh Cavallo, whose brave news has resonated around the globe and will help to make society and football stronger and more inclusive. https://t.co/C5uVHuTLnh

Last but not least, Football Australia issued a statement on their Twitter account, praising both Cavallo and former A-League player Andy Brennan, who became the first openly gay Australian footballer in 2019 while playing for Hume City in the National Premier Leagues Victoria.

“His [Cavallo’s] courage to be open with himself and share that part with others is inspiring and will hopefully inspire more footballers to do the same in the future,” it reads.

We applaud the courage shown by @AndyBrennan36 and now @JoshuaCavallo.

The football community supports you all the way ❤️ pic.twitter.com/PDfguKL46z

The biggest and most popular sport on the planet, all united behind Josh Cavallo. It might be Australian football’s most powerful moment ever. 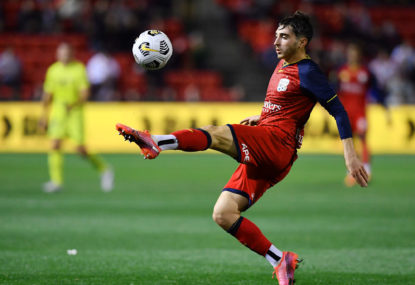 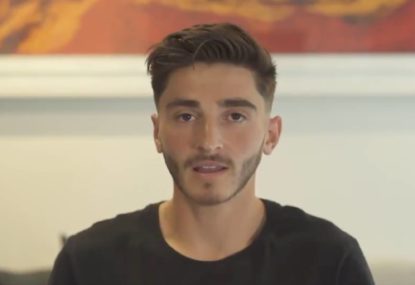 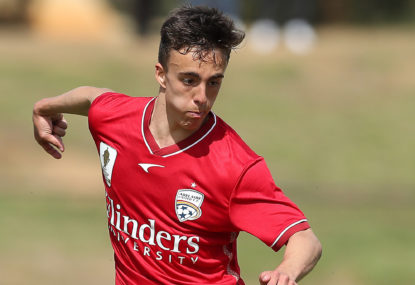