Racing NSW under Peter V’landys is forging ahead with single-minded determination to reshape and reboot what the spring carnival in Australia looks like.

The Everest is clearly the pick of the new races injected into Sydney racing, but the Golden Eagle for four-year-old’s is a worthwhile addition in its own right, in a way that some of the other pop-up races aren’t.

GOLDEN EAGLE – 1500m
A full field of 18 has been assembled, each with a touch of quality about them. Six individual Group 1 winners will greet the judge, along with place-getters in races such as the Caulfield Guineas, Newmarket Handicap and Flight Stakes.

They’ve come from everywhere to contest this race, so where do we start?

There are two horses coming off Group 1 wins in this field, and they head the market accordingly. And you suspect both would prefer to be at Randwick or Flemington than Rosehill.

Private Eye took out the Epsom with a dazzling finish. He’s just a dead-set winner having won eight of his 13 starts, and the form behind him in those victories has stood up time and time again. He deserves to be the testing material but jumping from barrier 14 won’t do him any favours, and he’ll only have the shorter Rosehill straight to round up his rivals this time.

I’m Thunderstruck won the Toorak down at Caulfield thanks to the ride of the century from Jye McNeil, but the horse showed enormous toughness and acceleration to carry him through those needle-eye gaps. He’s only had eight starts, winning five, and still could be anything really. There might be a little query about dropping back to 1500m for the son of Melbourne Cup winner Shocking.

Amish Boy was two lengths behind I’m Thunderstruck in the Rupert Clarke, run before that Toorak, and while both had unlucky runs, they probably cancel each other out so we can call that margin genuine. Amish Boy also ran in the Silver Eagle two weeks ago, and was just over two lengths from the winner there. It does tie the form together.

Aim was the winner of the Silver Eagle, bursting through at bolter’s odds, and he also beat Amish Boy by a couple of lengths at the Magic Millions in January, so the form is solid. That said, both horses can mix their runs and are hard to trust, but can produce a great run on their day. Aim’s two wins this year have both been at $31, while Amish Boy still only has one career win to his name.

Ellsberg and Count De Rupee both got knocked sideways around the home turn in the Silver Eagle, the latter moreso than the former, and both should have finished ahead of Aim there. Count De Rupee is the lowest-rated horse in the field, but is certainly more talented than that, and looks the pick of those from that race. He’s drawn to perfection too.

Apache Chase comes down from Queensland, where he also met and beat Amish Boy back in May (seriously, is there anyone that horse hasn’t raced?). He also was less than a length off Private Eye at Eagle Farm in May, and has returned with two solid wins in Queensland this campaign. He beat Emerald Kingdom last start, and that horse was well fancied but awful at Randwick last week.

The market doesn’t have much respect for the mares backing up from newly-formed Invitation last week. It was a pretty ordinary field, and the winner Icebath is heading to Melbourne to try her luck in a proper mares race. Vangelic is the best of these, hard fit, and could give some cheek on speed from barrier five, especially if the rail and up front is the place to be.

How to line the internationals up, having not raced since July and August? None of them has form that screams 1500m on Australian soil, and two of them have been handed genuine visitors draws. They’ve been easing in betting and that can probably be expected to continue.

Aegon is the interesting runner. A Group 1 winner in New Zealand, he was sighted winning the Hobartville at this track in February before his bubble burst with disappointing performances in the Randwick Guineas and Doncaster. He resumed with a pleasing fourth in the Memsie Stakes, before being too had to be true in the Makybe Diva Stakes, and he comes into this off a seven week let-up. He’d love the cut out of the ground, but isn’t going to get it.

The Golden Eagle should be run at a genuine tempo. Apache Chase and Vangelic are the likely leaders, with Ellsberg and Love Tap on the premises from low draws. Aysar will push across to inject some speed from out wide, wanting to be handy. There are a number of others that may go forward or back from very wide barriers.

CLASSIQUE LEGEND STAKES – 1300m
The Everest gets all of the attention, and the Golden Eagle is also a fine initiative, but the Winners Stakes, which gets named after the previous year’s Everest winner, is also a fine addition to the racing calendar.

The two placegetters from the Everest front-up here, and dominate the market accordingly.

Masked Crusader is favourite, and why wouldn’t he be after that blazing finish in the Everest, ducking and weaving through the field to just fall short of Nature Strip. He hasn’t won beyond 1200m despite a few attempts, but two of them were terrific runs at Group 1 level and beaten just over a length. Rosehill isn’t really his track though, in the way that Randwick has been. 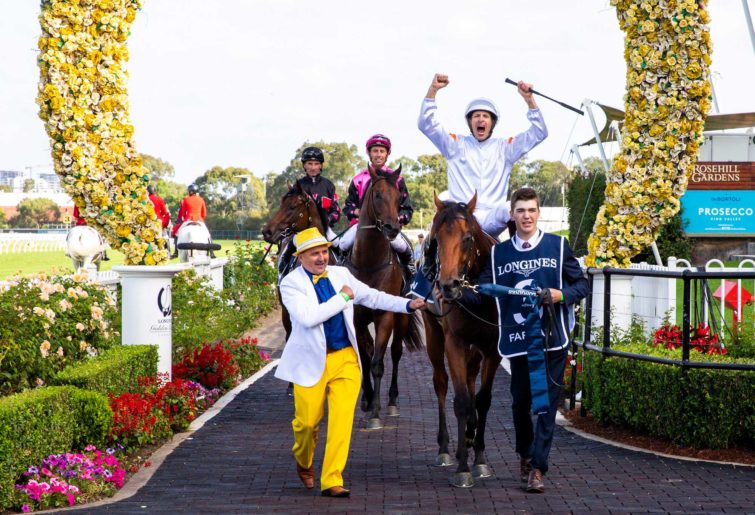 Is there anything better than Rosehill racing? (Photo by Jenny Evans/Getty Images)

Eduardo was so good in defeat in the Everest. Yes, he had every chance and Masked Crusader swept by him, but he was strong to the line all the same – many questioned whether he would be at 1200m. He does love Rosehill, with three wins from four starts here. If he can run his own race up front, he’ll be tough to beat.

Lost and Running, Trekking, Gytrash and Libertini also come through the Everest, finishing in that order through the field. How do they turn the tables on Masked Crusader over an extra 100m, let alone Eduardo as well?

Lost and Running has drawn terribly, so where does he get to? Gytrash won this race last year, and must be respected. Trekking is always thereabouts. Libertini is sure to be the forgotten horse, and might make people pay for it back on firm ground.

Big Parade is already being talked about for an Everest slot next year after his Sydney Stakes win, and gets the chance to enhance his credentials with all eyes on him. It’s statement time.