Warner, who laughed about people saying he was out of form before the match made the most of a shocking dropped catch from the Lions to prove he’s still a force to be reckoned with – smashing 10 fours in his 65 off 42 balls.

Earlier, Australian captain Aaron Finch had no hesitation in fielding first with an unchanged line-up.

It seemed to be the correct decision when Pat Cummins picked up opening batsman Pathum Nissanka for just 7 with the score 1 for 15.

But 24-year-old Charith Asalanka was a man on a mission.

Fresh off a 49-ball 80 against Bangladesh Asalanka was out to prove his previous innings was no fluke.

He smashed his first two balls off Cummins for four and then took on Glenn Maxwell with a huge six in a brilliant counter-attack.

Sri Lanka brought up the 50 inside the first six overs.

With Maxwell going for 16 off his first over, Finch was forced to be creative.

He used Marcus Stoinis to try and stop the bleeding but Kusal Perera – who was happy to play second fiddle in the power play – started to branch out and took Stoinis for consecutive boundaries in the 9th over with some glorious square drives.

Spin bowler Adam Zampa’s googly proved difficult to pick and he made a much needed breakthrough to remove the dangerous Asalanka for 35 who holed out to Steve Smith in the deep.

It sparked a stunning collapse.

Sri Lanka’s hopes of posting a huge total completely vanished in the space of four overs with the side losing 4 for 16 thanks to Starc (2-27) and Zampa (2-12) putting the squeeze on.

Bhanuka Rajapaksa and captain Dasun Shanaka set about rebuilding the innings with Rajapaksa targeting Stoinis with some lusty blows in the 17th over.

While Shanaka fell in the pursuit of quick runs, Rajapaska remained composed and his 33 not out cameo helped Sri Lanka avoid disaster to post 6 for 154. 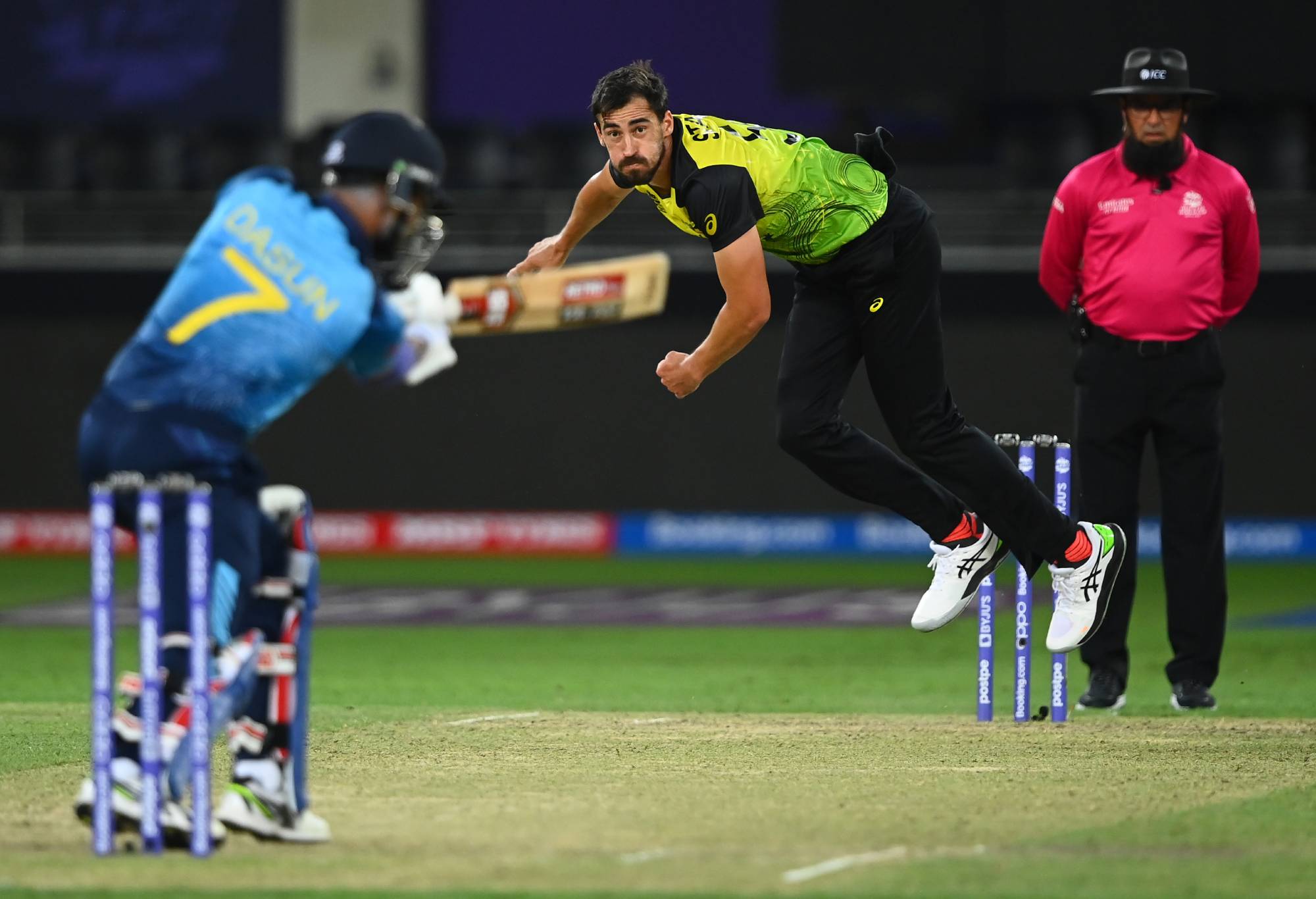 Australia made a blistering start in reply with David Warner and Aaron Finch making hay in the powerplay.

Finch was particularly savage and blasted the ball to all parts of the ground.

Warner had a huge life on 17 when he gloved one through to wicketkeeper Perera who inexplicably dropped a sitter.

Two balls later Dushmantha Chameera bowled the worst ball ever seen at a T20 World Cup when his delivery ended up on the third pitch of the square.

It was spiralling out of control for the Lions but they managed to finally have things go their way with Aaron Finch chopping on for 37 and Glenn Maxwell (5) falling cheaply after being promoted to bat at No.3.

However, that just brought in Steve Smith who steadied the ship by nudging singles and giving the strike to Warner who made the most of his chances to bring up his 50 off just 31 balls.

While Warner fell with victory in sight, the job was done and Australia coasted home with 18 balls to spare.

“That was a really good performance,” Aaron Finch said after the game.

“It honestly did feel like they were going at 15-runs an over (in the powerplay) but then when you look up at the scoreboard it was 8-an over so it was just a reminder to make sure we keep sticking to our plans and don’t start playing on emotion.”

Finch was asked about Adam Zampa receiving the man-of-the-match for his 2 for 12 off 4 overs compared to Warner’s 65.

“As a batter I love batters getting it (MOM),” Finch joked.

“When you’re looking at the impact on a game. Zamps was terrific tonight. On the back of a really good powerplay from Sri Lanka, the way that he controlled the game, he was fantastic. That was a world class performance from him.”

Australia’s next game is against the undefeated England on Sunday morning AEDT.

“We’ve had some great tussles with them,” Finch said.

“They’ve been the form side in the white ball format for a long time so we know how they play. They’re aggressive, they take the game on so it will be entertaining.”