Barrett stars as All Blacks destroy Wales with breathtaking finale and leapfrog Boks at No. 1

Beauden Barrett has marked his 100th Test with two intercept tries to lead New Zealand to a convincing 54-16 win over Wales in Cardiff on Sunday (AEDT).

The All Blacks outscored their hosts by seven tries to one at a capacity 70,000-plus Principality Stadium in another ominous reminder of their power as they went back to the top of the world rankings.

Wales, who lost skipper Alun Wyn Jones to injury early on, replied with a try from Johnny Williams and penalties from Gareth Anscombe (2) and Rhys Priestland.

Captain Jones, in his 149th appearance for Wales, was forced off with a shoulder injury as he attempted to tackle Jordie Barrett. It was the same one dislocated playing for the British & Irish Lions against Japan in June.

New Zealand ran riot in the final 20 minutes with a display of running rugby that even the most ardent Welsh supporters could not help but admire, but it was Beauden Barrett’s early try that laid the platform for their victory. 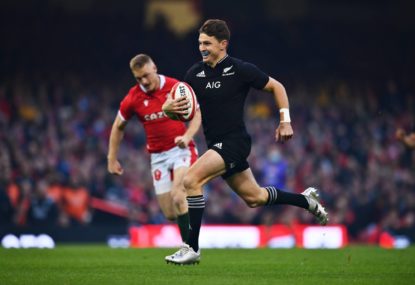 The former World Rugby Player of the year took only five minutes to intercept a pass from Wales flyhalf Gareth Ainscombe, who was returning to Test rugby following an absence of more than two years following a major knee injury, and run down the pitch to dot between the posts.

Perenara added another try about 30 minutes later but the All Blacks had a tenuous 18-6 lead at halftime and started the second half down to 14 men when Nepo Laulale was yellow-carded for a no-arm tackle on Ross Moriarty.

But when the rain began to pour, the Kiwis were at their devastating best with a clever kick and chase for Jordan’s 55th- minute try, followed by four more in a rampant last 15 minutes, including another interception for the centurion on the final whistle.

Wales, who were without their English-based players, had one highlight when Priestland’s clever kick allowed Williams to rush through and dot down ahead of the Kiwi defence for their only try on the hour mark.

“We wanted to ramp it up a bit there in the second half. We were happy with the outcome after a different week for us, coming across from playing in Washington,” All Blacks captain Sam Whitelock said.

Barrett added: “I’m somewhat relieved it is over. It has been a tense week because of all the support that has rolled in. What a place to do it – the Welsh fans are hard to beat.

“We always had to work against a very good Welsh side. I am proud of our boys. We showed various ways we can play and adapted well to the yellow card.

“I just wanted to focus on playing well but tonight I’ll enjoy the boys’ company and thank everyone who has helped me. It is a very competitive team to be a part of and we all push each other.”