Could Nic Maddinson's hot form see him be an Ashes bolter this summer?

On Saturday the 30th of October, Victoria defeated New South Wales on the final day of their opening Sheffield Shield match for the 2021/22 season.

Despite both Marcus Harris and Peter Handscomb scoring centuries in the second innings, and combining to record a 261-run partnership, Nic Maddinson was awarded ‘Player of the Match’ honours after his first innings score of 87.

Though a strange choice, Maddinson’s knock came at a vital time and took Victoria’s score to 199, when it looked like they could be bowled out for less than 150. His mature performance helped give the Vics some momentum heading into the change of innings; which the bowlers capitalised on, bowling New South Wales out for 151.

Recently, Maddinson has made a habit of scoring runs when Victoria needs him to, and has built an impressive resumé that, if he can continue to add to it over the next month, might just see the national selectors take notice.

Since moving from New South Wales to Victoria ahead of the 2018/19 domestic season, Maddinson has averaged 66.05 in the Sheffield Shield, with eight half centuries and five centuries – one of those a career best 224.

In comparison Harris has averaged 60.72, Matthew Wade 58.91 and Travis Head 48.91 in the same time period. All have earned call-ups to wear the baggy green as a result.

Even Shaun Marsh – who has dominated at Shield level in recent times – averages a little less than Maddinson with 64.44 over the last three seasons.

The fact that each of these players has been selected for national duties off the back of form like this, suggests Nic Maddinson is in line for an Ashes call-up. Or, if not, that he should be. 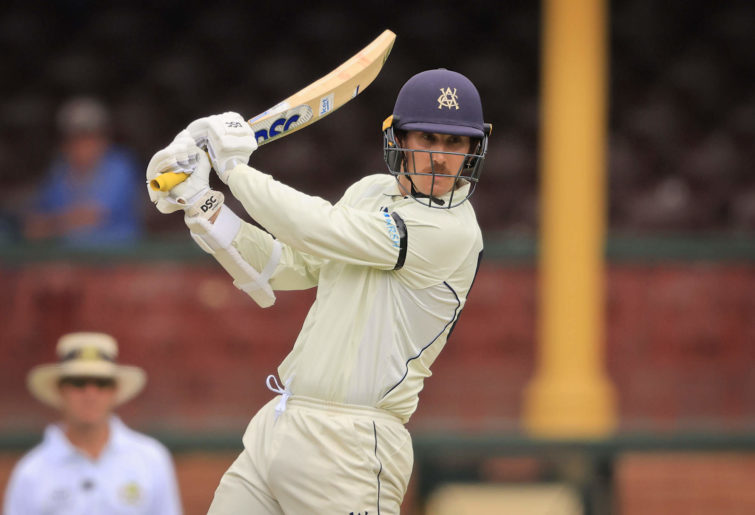 Nic Maddinson of Victoria bats during day two of the Sheffield Shield match between New South Wales and Victoria at Sydney Cricket Ground on February 18, 2021 in Sydney, Australia. (Photo by Mark Evans/Getty Images)

Interestingly, most – if not all – of Maddinson’s runs were scored opening the batting for Victoria; a spot that currently appears to be open for the Ashes alongside David Warner, especially if another Victorian in Will Pucovski is unavailable as he battles his latest concussion.

However, Victorian Coach Chris Rogers has now permanently moved Nic Maddinson into the middle order, after switching him between opening and batting at number four last season.

If Maddinson can make a big score in the coming weeks of Shield cricket, don’t be surprised to see him announced as part of the squad for the upcoming Ashes series as a middle-order batter – or even, if the selectors are truly desperate, as an opener.

His form over the past three seasons suggests he’s ready for a return to the Test arena, and redeem his ugly 6.75 batting average from three horror Tests against South Africa and Pakistan five years ago.

All he needs to do now is continue to bat well and he should be rewarded by the selectors.

This time 12 months ago, Rogers shared a similar sentiment about Maddinson’s international chances.

“Technically, he’s very, very good. He does it his own way, but if he goes and has another season like he did (in 2019) then he’ll push his name into (Test) contention, but he’ll have to earn it,” Rogers said.

This will certainly be an interesting watch over the course of this domestic season, but if Maddinson can continue to show form with the bat, like he has been doing these last few years, then he most likely will, as Rogers said, ‘earn it’.