Are the Wallabies on the road to their back-row nirvana?

Not long ago, the back-row cupboard in Australia looked bare. When Wallabies coach Dave Rennie announced his first Wallaby squad of 2020, there was Michael Hooper and his 99 caps, then there was nothing.

Scott Fardy and David Pocock had disappeared over the international horizon, leaving a noisy vacancy behind them. At the bottom of Rennie’s talent pool was a knot of promising youngsters not so much nibbling at Hooper’s heels, as hoping he could wait for their arrival as fully-fledged Test players.

The likes of Fraser McReight, Harry Wilson, Lachie Swinton, Rob Valetini and Liam Wright were all callow in Test terms, in the age range between 20-23 years old.

Move the picture on barely another 13 months, and how the view has changed for the Wallaby head honcho. What looked like scraps of optimism have turned into Aladdin’s cave of riches. A reservoir of talent so good that Rennie can afford to leave McReight and Wilson at home to hone their minds and bodies towards greater achievement in 2022, with the benefit of a proper pre-season:

“If he can accelerate his game over the next period like he has in the last 12 months he [McReight] is going to put a lot of pressure on Hoops. There are no guarantees for everyone.

“Everyone wants to tour, and you take Harry [Wilson], who hasn’t played Test match footy in the last month, he’s desperate to play at this level. But staying home is going to give him an opportunity to make shifts physically in his game to allow him to excel at this level.

“To his credit, he’s been really mature around it. He wants to play, he realises coming away with us if he doesn’t get that chance to play he’s still going to have to train and do all those things to help the team prepare. And this gives him a plan. We rate him highly and as a young man he really hasn’t had an off-season, he didn’t get much of one last year.”

Valetini has established himself as a number 8 of genuine Test class, with either Swinton or Rob Leota on the blind-side and Pete Samu freed to play the impact role off the bench for which he is arguably best suited.

Sean McMahon returned from Japan (albeit briefly) and Ned Hanigan will be back for the Waratahs in Super Rugby 2022. Meanwhile, Hooper has felt comfortable enough to enjoy one of his most outstanding seasons in recent memory – and that is saying something. There is now ample room for the youngsters to grow up in their own time, and in their own way.

How have Dave Rennie and his forwards coach Dan McKellar found their balance in the back-row? Let’s take a look at some of the critical numbers – first on attack:

* Figures in brackets indicate outstanding performances featuring in the top tier of the Rugby Championship [all teams] for that area.

There is a clear division of roles among the three back-row positions. The man with the biggest engine in the whole Rugby Championship – Rob Valetini with his 475 minutes played out of a possible 480 – was the workhorse ball-carrier at number 8.

Lachie Swinton and Pete Samu at number 6 both provided more lineout ball than any of the Australian second rows, while Michael Hooper did what only Michael Hooper can do: getting from one piece of action to the next at an insane rate and providing explosive line and tackle-breaking quality.

This is how the picture looks on the other side of the ball:

Once again, Hooper and Valetini’s sheer work rate in combination is impressive, with eight dominant tackles for loss, a joint 90% plus tackle completion rate, five on-ball turnovers and 15 significant on-ball attempts between them.

The fundamental idea behind the Wallaby version of back-row balance is to get the number 6 as close to the original site of the action as possible on tight ‘grunt’ duty, with Valetini and Hooper ranging far and wide off that launch pad.

Here is a simple example on a change of possession. Samu Kerevi has returned a box-kick off Faf de Klerk into contact, and the Wallabies want Lachie Swinton re-rucking over the top of him. That enables Valetini and Hooper to use their running power further out, in this case to help force a counter-ruck turnover penalty along with Len Ikitau: 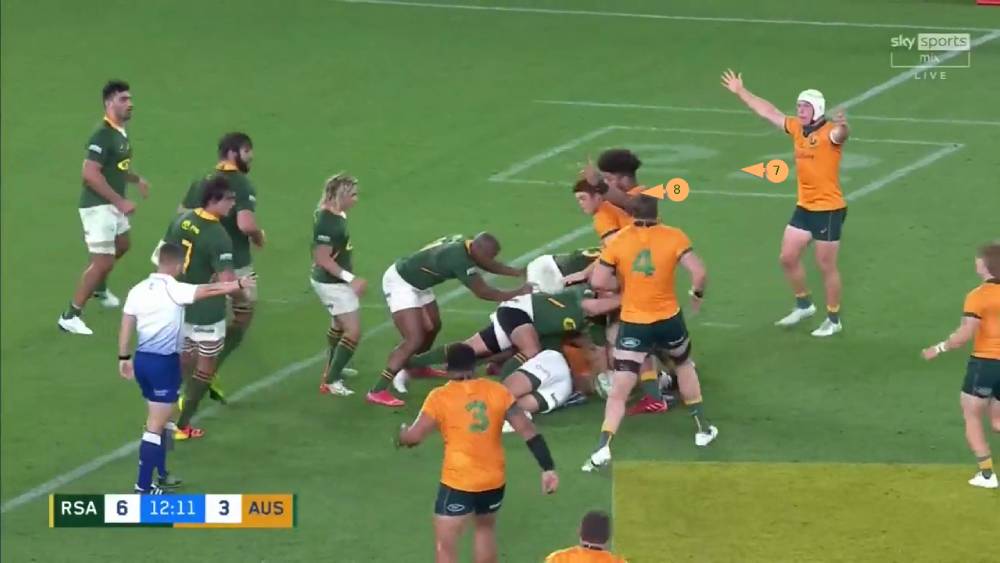 It is a similar story when the ball is kept in hand rather than being kicked away:

On this occasion, Pete Samu (on for Swinton) protects the initial kick return by Tom Banks, with Hooper and Valetini free to operate out wide on the countering phase. Hooper’s role is instructive: he is the ‘connective tissue’ linking the first ruck to Valetini’s final run on the touch-line. He starts as a decoy runner for Samu Kerevi and Quade Cooper in midfield, but finishes by cleaning out over the top of the Wallaby number 8 on the sideline.

After another successful high ball receipt, Swinton is in close ruck attendance while Valetini and Hooper fly to the ball further out: 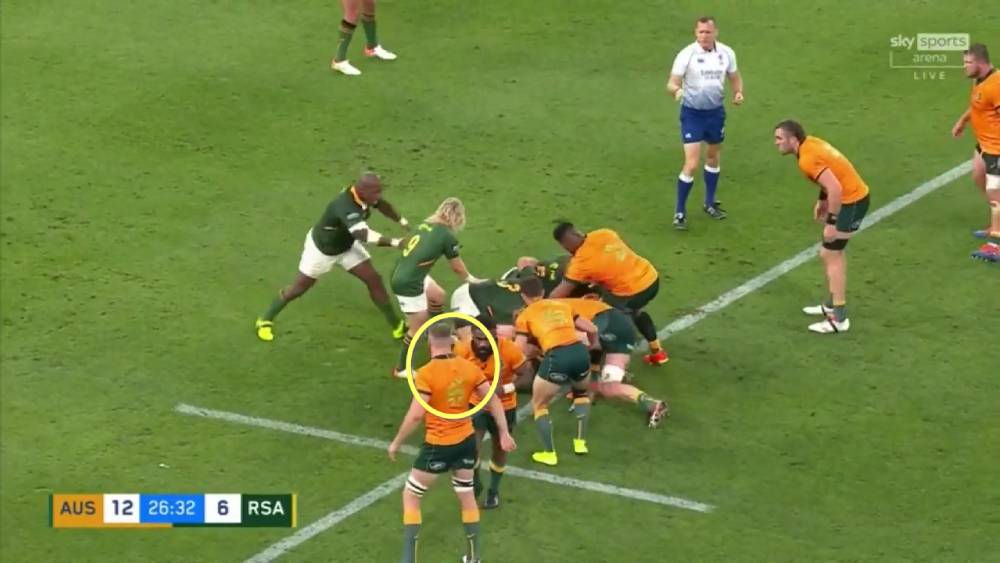 From set-piece attack, the division of roles takes a different form. In the following instance, Lachie Swinton wins the initial lineout ball, Hooper links the first and second phase – first passing to Folau Fainga’a from the fake maul, then peeling away to follow Kerevi’s break and become the second man cleanout – before big Rob finally thunders forward on the run: 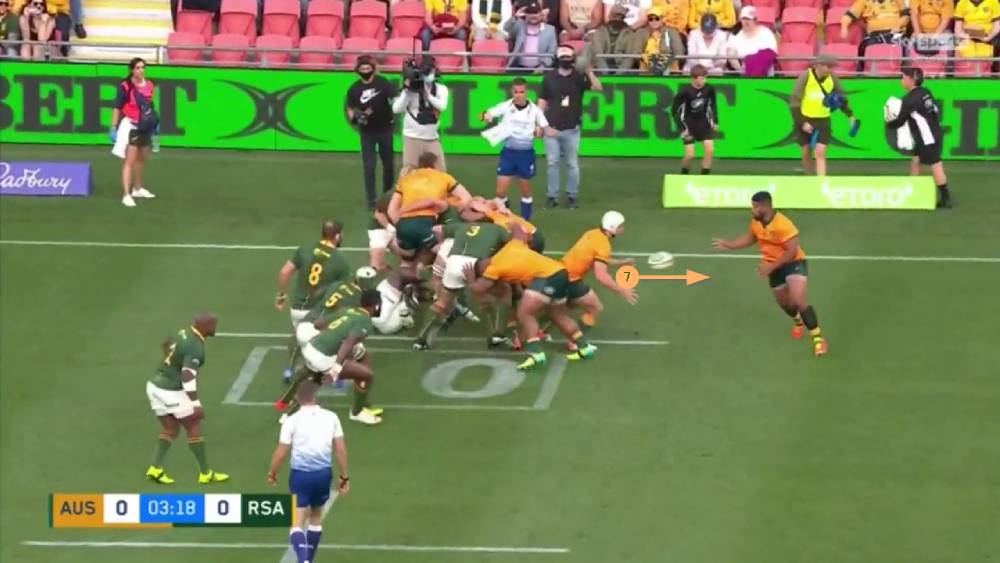 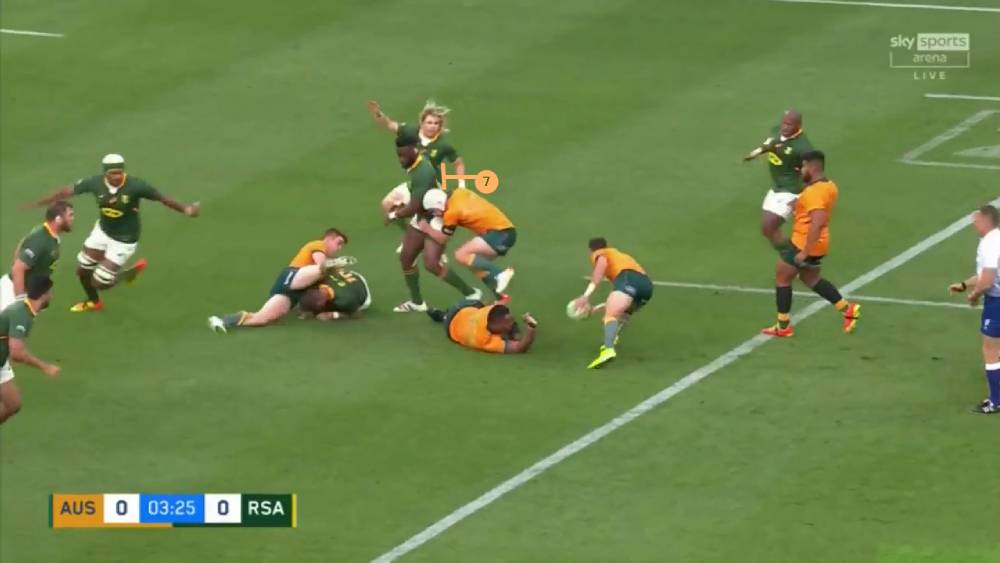 Here is another example:

Swinton wins lineout, then Hooper passes to Fainga’a and follows Kerevi to become the first cleanout support. When the scoring play came back to the blind-side, the Wallabies emphatically didn’t want Swinton involved in the play: 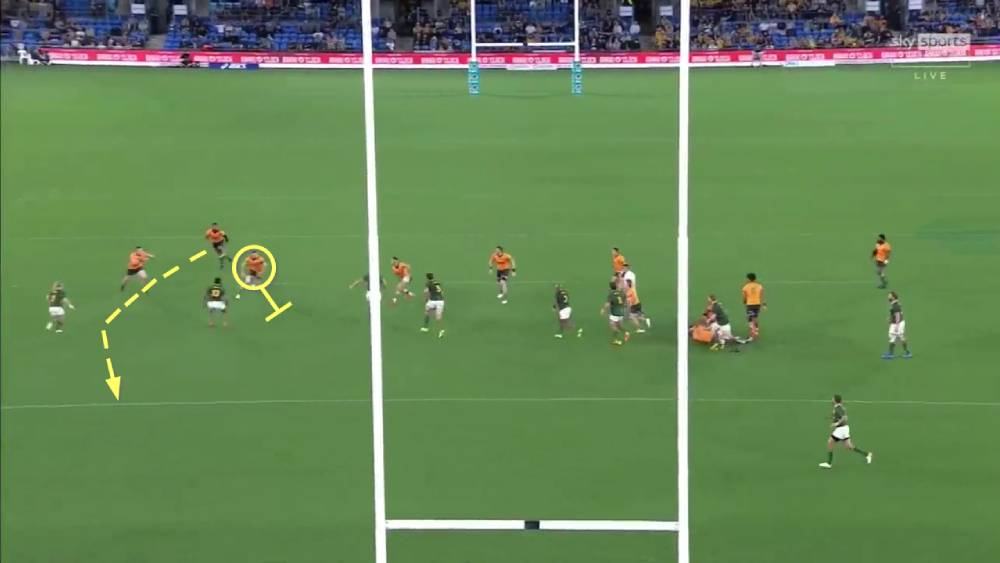 The ball is passed between Cooper and Kerevi, and Lachie is strictly decoy material!

A longer sequence in three phases illustrates the division of roles perfectly:

Michael Hooper is involved three times as the connective ‘liagament’ – passing the ball from lineout to Tate McDermott, cleaning out over the top of Valetini’s first powerful burst, then acting as scrum-half to make the break up the middle on third phase, before linking with guess who? That’s right – Rob Valetini.

Once Lachie Swinton has performed his initial set-piece role, he is out of the picture. The role of the number 6 only expands when Pete Samu comes off the pine for the final 20 or 30 minutes:

Dave Rennie’s Wallabies have gone from relative rags to riches in the back-row, in the space of just over 12 months. They can afford to let the likes of Sean McMahon return to Japan without a second thought, and leave young guns as good as Harry Wilson and Fraser McReight at home because of the depth they are developing.

Rob Valetini has enjoyed a breakout season in the unfamiliar position of number 8, and together with Michael Hooper he has driven the Australian team forward from its very guts, its solar plexus. The pair played all but 15 minutes of the Rugby Championship between them – Valetini driving, Hooper linking and breaking, the pair of them tackling everything that moved and counter-rucking like dervishes.

Number 6 is strictly a role player in this Wallaby set-up, winning the vast majority of lineout ball and sticking close to contact thereafter. The role only expands when Pistol Pete enters the fray.

Whatever spark ignites with number 6, numbers 7 and 8 will fan the flames to the max, they are the true fire-starters. They will be looking to burn the houses at Murrayfield, Cardiff and of course, Twickenham to the ground over the next few weeks. It may be Wallaby nirvana, but there is nothing serene about it at all.