The Atlanta Braves have won their first World Series championship since 1995, hammering the Houston Astros 7-0 in Game 6.

Jorge Soler hit his third home run of the Series, a go-ahead three-run drive in the third off Luis Garcia, and Freddie Freeman and Dansby Swanson also connected.

Steadied by 66-year-old manager Brian Snitker, an organisation man for four decades, the underdog Braves won the franchise’s fourth title, about 9-1/2 months after Hall of Fame slugger Hank Aaron died on January 22 at 86.

THE ATLANTA BRAVES ARE WORLD SERIES CHAMPIONS FOR THE FIRST TIME IN 26 YEARS ‼️ pic.twitter.com/WWCscFx2Zs

I recently tried my hand at comparing cricket and baseball from various angles – how the games are played, player numbers, audiences, global spread,… 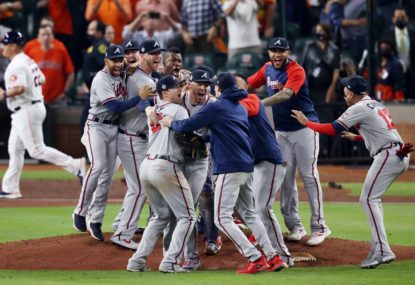 This article tries to size up cricket and baseball in terms of their revenues, salaries, spectators and viewing numbers. I will leave to explore…

As well as being a cricket fan, over the years I’ve occasionally dived deep into baseball, particularly Major League Baseball (MLB) in the USA.…

MLB has packed a real punch this year. Despite there being no crowd in the stadiums, the action has been spectacular. Let’s start discussing…

In most team sports, it does not take long for teams to figure out who the leaders are among them. They are usually the…