Winger Matt Ikuvalu will follow coach Craig Fitzgibbon from Bondi to Cronulla after being granted a release from the final year of his Sydney Roosters NRL contract.

The 27-year-old Ikuvalu joins the Sharks on a two-year contract, as the club announced the retention of veteran prop Aiden Tolman, along with the signings of Olympic rugby sevens player Lachlan Miller and hooker Jayden Berrell.

Ikuvalu was picked up by the Roosters while working as a shoe salesman and went on to score 25 tries in 38 NRL games for the club, including a five-try haul against North Queensland last year.

“It has been a pleasure to coach Matt and to watch him progress from a fill-in training role to a key contributor in our NRL squad,” Roosters coach Trent Robinson said.

Ikuvalu will compete with Sione Katoa and Ronaldo Mulitalo for a spot on the wing in Fitzgibbon’s maiden year in charge of a first-grade side.

The former Roosters assistant has been busy in the transfer market having already added Dragons captain Cameron McInnes and Melbourne duo Nicho Hynes and Dale Finucane to the revamped Sharks squad for 2022. 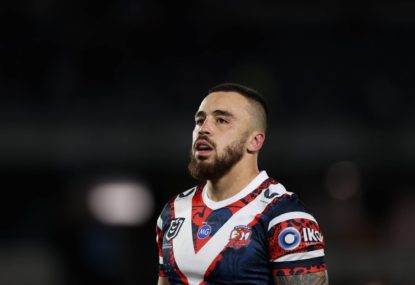 Joining them is 27-year-old Miller, who was part of Australia’s sevens team in Tokyo and had been linked with Cronulla more than a month ago.

Having the ability to cover the spine or backline, Miller is believed to have turned down other opportunities in league and union to sign a two-year deal.

Berrell will provide back-up at hooker to Blayke Brailey and McInnes after his exploits in Wynnum-Manly’s journey to the Queensland Cup grand final were brought to Cronulla’s attention by Mat Rogers.

Rounding out the Sharks’ flurry of signings is Tolman, who has opted to prolong his career with a one-year contract.

The 32-year-old joined from Canterbury before the start of last season and has acted as a calming influence on a talented young squad aspiring to challenge for a top-four spot in 2022.

“I enjoyed my first year at the club and I’m really happy to be returning for a second,” Tolman, who is four games shy of joining the NRL’s 300 club, said.

“We’ve got some quality players joining us and a new coach in Craig who I’m looking forward to working with.”

Meanwhile, the Storm have added a former sevens player of their own by bringing in New Zealander William Warbrick.

The 23-year-old, who won a silver medal at Tokyo, is aiming to play in the Storm’s outside backs.

Melbourne also announced the signing of playmaker Jayden Nikorima, who has not played NRL since 2016.

The playmaker was sacked by the Roosters for failing a drugs test the following season and has recently been plying his trade in the Queensland Cup.

Elsewhere, South Sydney have signed 22-year-old winger Isaiah Tass, who had previously been on the books of Brisbane and Canterbury, on a one-year deal.