Coach's Corner Issue 32: What do Scotland have in store for the Wallabies?

Thanks to all who contributed a question, or helped develop one at the call-out stage.

Are you able to provide some insights into what we can expect from Scotland (and England, Wales) and what strategies we may have to employ to come out on top?
– Vintage Red

Which home nation do you see as the toughest game for the Wallabies? England are always tough but for me, I think Scotland will present a bigger challenge to the Wallabies.
– Leroy 14

Did you see the vulnerability in the Scottish maul and also in the wide channels?
– Bludger

Where do you see Australia’s biggest opportunity to expose Scotland this weekend at Murrayfield. How would you be looking to break them down?
-TJ Force Fan

Without Kerevi’s running game and Hodge’s boot, but with a reinforced forward pack, would the Wallabies be best served this week by reverting to the Cheika-era game plan of running the ball from everywhere, and relying on big forward runners to generate front foot attacking opportunities?
-tighthead

Given Cooper and Kerevi are now confirmed out, do you expect Rennie will change the combinations of players in an attempt to find those who can more successfully execute the same plan, or do you think he will change the plan to suit his preferred players?
– Hazel Nutt
What do you think is needed in changes to the game-plan with Kerevi and Cooper out? Do you think they’ll keep the ball tighter and play more through the forwards
– JC Masher

The vast majority of questions this week focused on the end-of-year tour prospects for the Wallabies, and especially on their upcoming fixture with Scotland at Murrayfield this Sunday (Monday morning AEDT).

Scotland enjoyed an easy warm-up against Tonga last weekend, winning by 60 points to 14. You can watch the Stan highlights package here:

As Leroy points out, Scotland have been something of a bogey team for Australia in recent years, with the Scots winning four of the last seven games between the two sides dating back to 2009.

The side which played Tonga will probably be fortified by five other starters who were on the Lions tour to South Africa during the summer – Rory Sutherland at loosehead prop, Finn Russell at number 10, Chris Harris at outside centre, Stuart Hogg at fullback and big naturalized South African Duhan van der Merwe on the left wing.

Although the home team will field two 2021 Lions at prop in the shape of Sutherland and Zander Fagerson, their tight five has lost its key organizer and stabilizing influence in the absence of Johnny Gray. Gray has improved even further in his time at Exeter and was the Scottish tight forward who should have been top of the Lions’ shopping list in the summer.

Particularly if Rory Arnold and Will Skelton are added to the mix for the Wallabies, this area represents a natural area of attack. Australia can be potentially a lot bigger, and physically more imposing in the front five forwards. They can grind away at the scrums and on the carry off Nic White.

The tendency of a Steve Tandy-coached defence under pressure is to compress and lose width quickly around the 15 metre lines. If they can move the pile off 9 the Wallabies will be able to attract that compression quite early in the phase count. The following sequence comes from the start of the game: 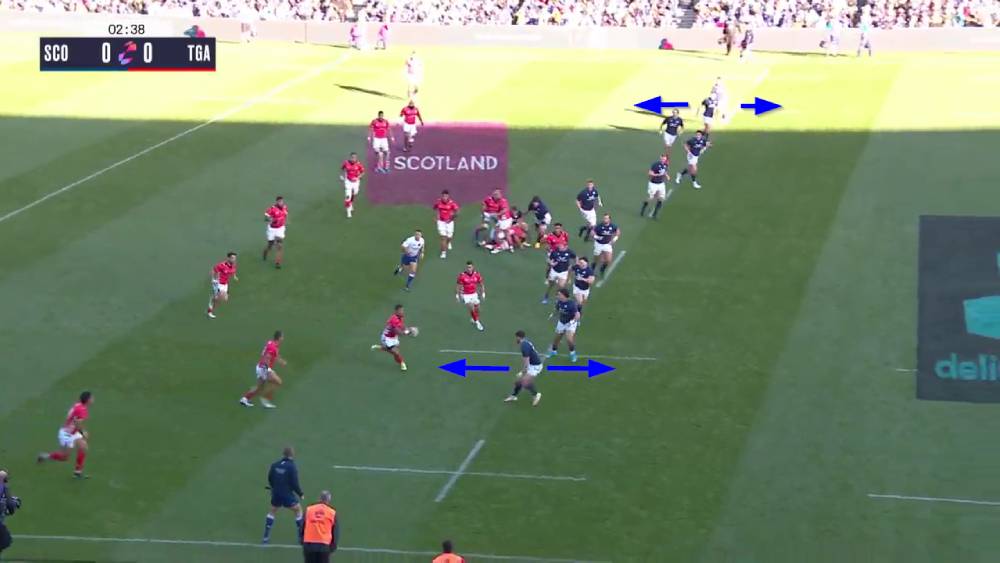 Even though Scotland only have quite a skinny short-side to defend, the final defender tends to stick on the 15-metre line and not show any lateral animation. The same was true when the ball was moved out in the other direction: 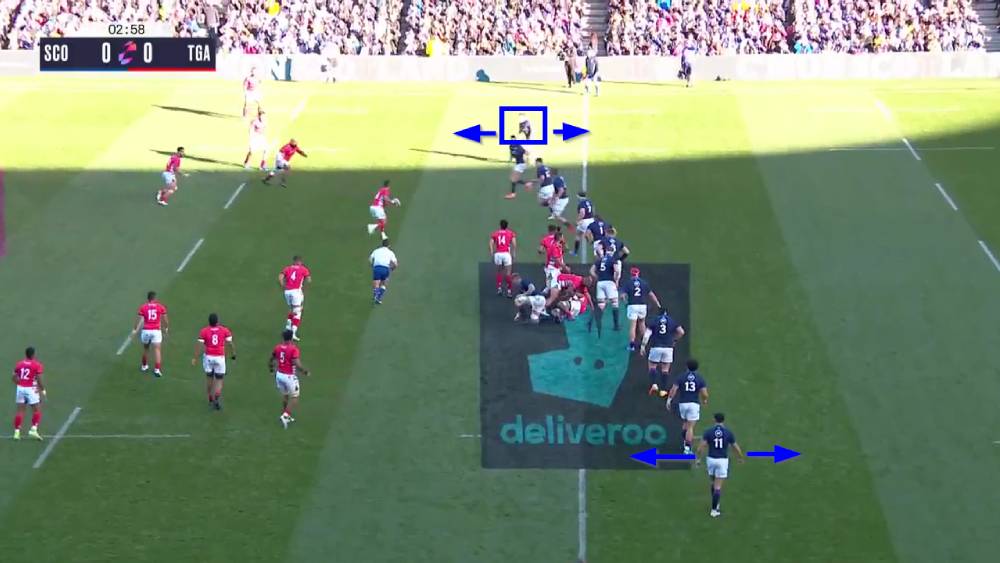 Only one Scottish forward wraps around the corner of the first ruck, and the final defender (scrumhalf Ali Price) sticks like glue to the far 15m line, allowing the ‘Tongan Bear’, ex-Hurricane Lonnie Uhila, to make a comfortable break underneath him.

The same space was available off first phase from turnover:

The ball is lost in contact and the Scotland right wing comes up and sticks on the far 15m line. Even though the passing is sloppy, there is still plenty of space available for the Tongan wide attackers when the ball finally arrives. The compression of the Scotland defence persists in their own 22: 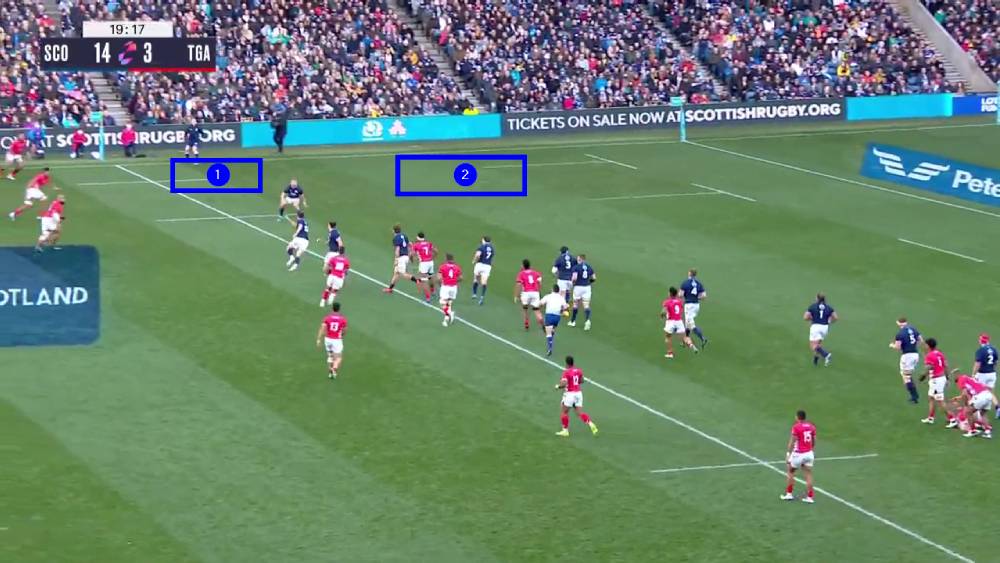 In the event the kick-pass is poorly executed and the chance is blown, but there was an acre of space available for the passing game (“1”) and the kick in behind (“2”).
The same theme was echoed later in the half from an attacking scrum in midfield:

If there is one Scotland player that Dave Rennie and his coaches may not know so much about, it is the ‘scat-back’ Darcy Graham. Graham is of Cheslin Kolbe physical proportions at 5’8 and 75 kilos, but he has some of Kolbe’s electric line-breaking skills.

Although he will probably be moved from fullback out to right wing to accommodate Stuart Hogg at the weekend, there were plenty of red flags for the Wallabies littered throughout the encounter with Tonga.

Graham can be deadly from the back on return duty:

With his ability to change feet and separate from tacklers so quickly, Graham is a constant threat. At the end of the second clip, he flashes that desire to keep the ball available in contact which led to Scotland’s third try of the game from a scrum:

Like Kolbe, Graham is also tough nut to crack in contact, despite his relative lack of size:

England is a question mark. Not sure what they’ll bring, the Saracens defensive game-plan? Or the Marcus Smith attacking flair? Either way, a few changes seem to be being made by Eddie Jones. Do you think those changes are a changing of the guard, the old for the new and upcoming generation of players for the next WC or a change of playing style?
– Leroy 14

So, what is [chief rugby writer for The Sunday Times] Stephen Jones’ pedigree? What made him so bitter [to criticize Eddie Jones so harshly]?
– Leroy 14

It’s worth looking further into the recent spat over Eddie Jones’ tenure as England rugby coach provoked by this recent article from Stephen Jones , the head rugby writer at The Sunday Times in the U.K.

For those of you who do not subscribe to the paper, there is a neat précis here.

In the piece, Jones accuses his name-sake of “coaching by chaos”, by picking such a large number of youngsters in his squad, who (in his view) amount to nothing more than ‘sporting roadkill’:

The writer goes on to criticize the rapid turnover of assistant coaches and backroom staff under the ex-Brumbies man (“it is rare for anyone in the Jones coaching hierarchy with the team to see out a contract”) due to the ‘brutal’ environments he tends to create.

Firstly, an observation about the observer. Stephen Jones has some very firm favourites, and that favouritism tends to lead him around by the nose. Who can forget his list of the top ten rugby coaches of all time?

It was all rightly taken with a pinch of salt by The Roar’s esteemed founder Spiro Zavos.

No Sir Graham Henry? No Wayne Smith? No Rod Macqueen? The top four all made their names as coaches in the U.K, and that really tells you all you need to know. In terms of their impact on the global game, their influence would be not be as great as others ranked either below them, or those entirely missing from the list.

As Stephen Jones’ bizarre defence of Saracens during the salary cap scandal confirmed, one of Jones’ other darlings is the club from North London.

Saracens now have fewer players in the current England squad than the likes of Leicester, Harlequins, and Northampton, and it is likely they will lose their grip on the team in the key spinal positions at numbers 8, 9 and 10. Change is in the air, so Eddie copped the flak for having the temerity to pick players from a far wider spread of sources.

The article did have one germ of truth at the centre. More snapshots from England life under Eddie Jones emerged in this reprise on The Roar.

The story goes that John Mitchell (Eddie’s former defence coach and his last assistant to leave) was on his way from the training ground at Lensbury to watch his son Daryl playing cricket for Middlesex on a designated day off, when Eddie stopped him in his tracks. He had some work for him to do instead. ‘Mitch’ went to the cricket anyway, and his departure from the England coaching group followed in fairly short order.

I can add my brief experience and impressions of Eddie Jones. After Stuart Lancaster’s coaching staff broke up after a disastrous 2015 World Cup, Eddie asked me to do some prep work on Scotland for England’s first match of 2016, and an interview was arranged.

I produced three unpaid reports in just under a fortnight (one a 75-page monster) – well beyond my usual output. Despite that, there was a lingering feeling that Eddie would never be satisfied.

We had a two-hour interview at Pennyhill Park (England’s main base) subsequently. He asked lots of questions, but it soon became obvious he thought he knew the answer to most of them, so the result was conversation in a closed-loop, rather than a free debate. It was an odd and unsatisfying sensation.

Eddie Jones has a very smart rugby brain indeed, there is no doubt about it. But I am not so sure about his claims to believe in rugby democracy and ‘consensus coaching’. In my experience, his instincts are more authoritarian, and he struggles to manage them.

He is to be applauded for taking some brave selection decisions and moving away from dependence on Saracens, but there remains a nagging uncertainty about whether he can create an environment stable enough to make full use of all the resources at his disposal.

See you next week!