It’s no secret that Peter V’landys and Racing NSW have been trying to eat into the heart of the Melbourne spring by keeping star gallopers in Sydney.

So far, there have been mixed results. It has certainly worked with the sprinters, via the Everest and the Winners Stakes, which firstly decimated the Manikato Stakes at Moonee Valley and has now taken similar toll on the VRC Classic at Flemington.

However, the prize money put up in Sydney for the middle-distance horses has had no impact, with Think It Over beating no-one on his way to several large cheques. Meanwhile, the Cox Plate was a great race, and the field assembled for the Mackinnon Stakes is one of the best in recent times.

Mackinnon Stakes
Zaaki is sure to jump a hot favourite, but he carries a little less gloss with him these days thanks to his defeat in the Underwood Stakes a month ago. A setback on Cox Plate morning ruled him out of that race, and he was subsequently targeted to this. Coming off a below par run and not being a picture of health, what to make of him?

It’s certainly been a week for wet track mares to prove their doubters wrong on good ground – Colette did so in the Empire Rose on Derby day, before Verry Elleegant put in a simply stunning performance in the Melbourne Cup.

Colette is on the back up here, and should be even better at 2000m than she was at a mile last start. There is a bit of rain about, so the surface will have some give in it too.

Hungry Heart was right there fighting out the finish with Colette in the Empire Rose, and is also backing up. She is another that is more suited at 2000m than 1600m, and in fact has been looking for the rise in distance all campaign. She’s a serious horse with a big chance, but needs it bone dry.

Also racing at either end of Cup week are Superstorm and Cascadian, first and third respectively in the Cantala on Saturday. The latter has a 1.5kg weight advantage from their meeting there, but is being tested at 2000m for the first time. He’s in typically honest run-on form.

Superstorm’s only previous attempt at the distance was last year when beaten two lengths in a blanket finish Turnbull Stakes behind Verry Elleegant. He was rushed up to 2000m from a 1400m for that, so wasn’t given his best chance. He’s had a great spring and is ready for it again now.

A midfield Cox Plate run has provided so many Mackinnon Stakes winners over the year, and Mo’unga and Dalasan are looking to continue that trend.

Mo’unga was a solid fourth behind State of Rest, and three lengths behind Verry Elleegant, in the Cox, and must be given plenty of respect. Dalasan was fourth lengths behind Mo’unga there are sitting behind a tempo that was too strong for him. If he can have a softer time he can still figure.

Homesman is there to keep the rest honest, as he always does. Keiai Nautique keeps running out without threatening the winner, and was sensationally left out of the Cox Plate, but looks tested here.

Private Eye is the interesting runner, also being tested at 2000m for the first time, but coming off an Epsom win before being too far back in the Golden Eagle. Behind him in the Epsom that day were Dalasan, Mo’unga, Cascadian and Hungry Heart.

It’s a cracker of an edition, no doubt about it. James McDonald may decide to make all the running on Zaaki, although Homesman is the likely leader if not. Dalasan will probably slot in behind, followed by Mo’unga. The rest are genuine backmarkers and will sort themselves out. 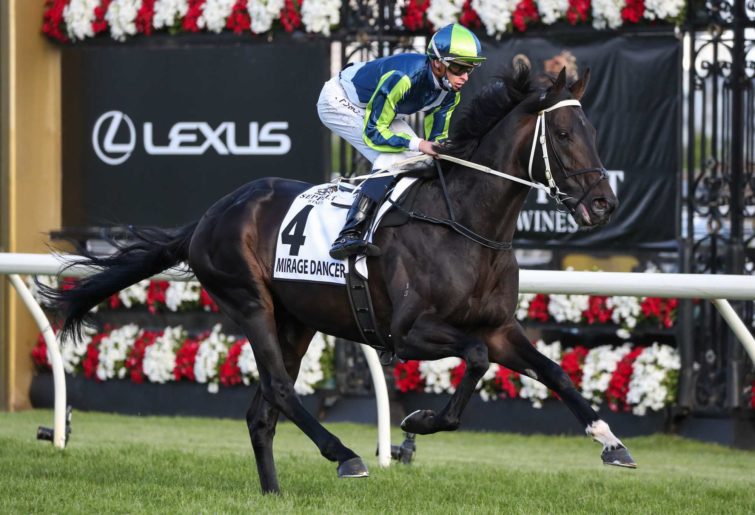 Mirage Dancer (GB) ridden by Michael Dee heads to the barrier before the Seppelt Mackinnon Stakes at Flemington Racecourse on November 07, 2020 in Flemington, Australia. (George Salpigtidis/Racing Photos via Getty Images)

VRC Sprint Classic
Nature Strip beat 11 rivals in The Everest. Six of them lined up in the Classique Legend Stakes last week instead of coming to Flemington to take him on again. One of the others was Home Affairs, and we saw him do a demolition job on the Coolmore Stud Stakes field on Saturday.

Nature Strip is a five time winner down the Flemington straight, including this race two years ago and the Lightning Stakes earlier in 2021. There’s no box he doesn’t tick in lining up for this thin affair, and he will be priced in the sharpest of red figures accordingly.

Bella Nipotina is in the best form of those looking to produce a miracle result, just failing to grab Jonker in the Manikato last time out, having compiled an incredibly honest spring while improving with each run.

Chris Waller is throwing a couple of three-year-old’s at his star sprinter, looking to land a WFA Group 1 placing to enhance their value at stud. Ranch Hand was back on the radar in the Coolmore Stud, albeit beaten a long way behind Home Affairs. Shaquero was ducking and dodging while running into traffic problems in that race, so dismiss him at your peril.

September Run and Swats That have always taken each other on, and there was not much between them again on Derby day. Swats That has drawn more to advantage here, but the jury is more out on both mares every time we see them.

Splintex is the pick of the others, a hardy sprinter that isn’t quite up to Group 1 level, but has found a liking for the straight this prep.

Nature Strip is going to lead as he likes, because if any try to take him on it will be to their undoing. It’s impossible to see him losing, and it’s up to the punters whether they want to take heavy odds-on about him or not.