The Roar
6th November, 2021
109
Join the conversation
4433 Reads
Advertisement
Write for The Roar

A dynamic unbeaten 89 from David Warner has all but seen Australia through to the T20 World Cup semi-finals with an eight-wicket win over the West Indies, in Dwayne Bravo and Chris Gayle’s international swansong.

The comfortable victory, secured with 22 balls to spare, left South Africa needing an unlikely thrashing of Group A leaders England to make a miraculous jump into the final four. They would run it close, racking up 189 runs from their innings, but needed to win by 68 runs to progress to the next stage. They could only win by 10.

That's it! Liam Livingstone hits Kagiso Rabada for six to tick England past 131, meaning Australia have qualified for the #T20WorldCup semi-finals!

Regardless, having recovered brilliantly from being dismantled by that England outfit last week with consecutive wins, Aaron Finch’s outfit deserves to continue their quest for a maiden T20 World Cup trophy.

Gayle, who is yet to confirm his retirement but whose farewell to the crowd after being dismissed told of his decision, began with two crunching sixes to raise hopes of a fairytale last stand; but falling cheaply once again, he was well and truly outshone by fellow left-hander Warner, whose return to form may just prove as crucial for the Aussies as the win he ensured.

Bravo, who like Gayle has underwhelmed this tournament, showed glimpses of his best with a six of his own; but neither his batting nor his bowling could impact the game enough to spearhead his Windies to an upset win.

>> Australia vs West Indies: as it happened

The relief on Finch’s face was palpable when he won his fourth toss of the group stage, quickly choosing to bowl first once again. Australia’s three previous wins this tournament had been set up by some brilliant PowerPlay bowling from the three frontline quicks, led by Josh Hazlewood. So when Windies opener Evin Lewis took the fight to the Aussie right-armer with three straight boundaries in the second over, a stress-free match looked unlikely for the men in gold.

Gayle, averaging in the single figures in a nightmare World Cup, then joined the party. He began with a thunderous six off Hazlewood as the quick’s first over cost 19. When he followed up with another off Pat Cummins’ first ball, an historic Australian tormentor looked to have woken from his slumber.

Cummins, though, would have the last laugh, the left-hander chopping on for a whirlwind 15, and departing to a standing ovation. 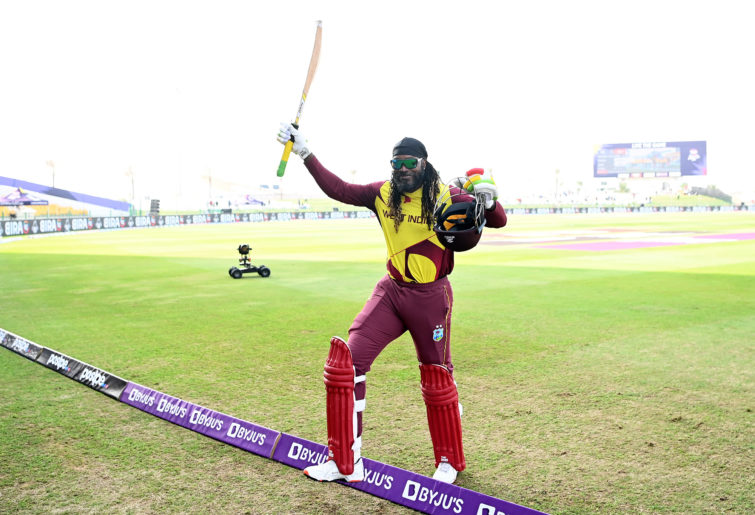 Chris Gayle salutes the crowd after what could be his final innings for the West Indies. (Photo by Gareth Copley-ICC/ICC via Getty Images)

From there, the Aussie attack, Adam Zampa chief among them, began to tighten the screws. Danger man Nicholas Pooran’s fall to Hazlewood for just 4 was a hammer blow for the underdogs, as was anchor Roston Chase, castled by a vicious nip-backer second ball; Finch’s decision to give Hazlewood an extra over after the early onslaught paying dividends.

While only England had piled on more PowerPlay runs against Australia than the Windies’ 50, the momentum had shifted. Enter Zampa. The leg-spinner has clearly been the player of the tournament for the Aussies thus far; another miserly spell, conceding just 20 runs and capped by enticing the dangerous Lewis into a top edge to long-off for Steve Smith to take an outstanding catch, prevented the calypso kings from building on their strong start.

With Mitchell Marsh also proving hard to get away from his first spell of the tournament – though a horror LBW review in his first over may prove costly in a post-match fines session – it took the West Indies until the 16th over to reach three figures. Another scalp for Hazlewood had the in-form Shimron Hetmyer gloving down the leg side for a subdued 27; the quick would finish with an equal career-best four wickets, remarkable considering the early punishment he copped.

Ok. The less said about that review the better.

Zampa’s one mistake – a dropped caught-and-bowled chance with Kieron Pollard on 3 – would prove costly, however. Freeing the arms and targeting the short leg side boundary at Abu Dhabi, the captain, with Bravo promoted up the order to keep him company, would lead the charge at the death. The work of his 31-ball 44 was capped off by two imperious sixes from Andre Russell from the final two balls of the innings, to dent Mitchell Starc’s previously excellent figures.

The second, at 111m, was the biggest hit of the tournament to date until Liam Livingstone broke it for England against the Proteas just hours later. Russell’s double blow allowed the Windies to reach 157. Below par considering their start, but a tricky total to chase regardless with so much at stake.

Openers David Warner and Finch had made light work of Australia’s two most recent run chases, against Sri Lanka and Bangladesh. And with Warner looking in imperious touch – three consecutive boundaries off Jason Holder’s medium pace sending shivers through the Windies’ camp – not even the captain’s departure for nine, chopping on off spinner Akeal Hosein, could derail the charge. 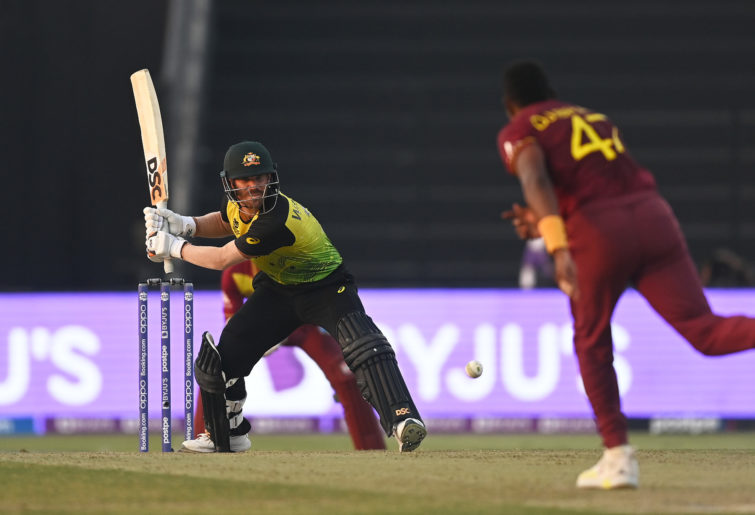 Having endured questions about his future in the shortest format for much of the tournament, and been forced to publicly defend his form, the West Indies bowlers were treated to a critics-defying barrage of boundaries from Warner. Bisecting the infield at will during the PowerPlay and lofting over it with ease, not even Bravo was spared in his final spell; the left-hander thumped his first ball for four to continue the milestone-ruining work he’d started by claiming the catch that ended the all-rounder’s batting innings.

Included in the Windies’ attack for the first time this tournament based on his tormenting of Australia in the Caribbean earlier this year, Hayden Walsh met his match in Warner, who didn’t tour. The leg-spinner’s first ball of his second over went for six as the run rate continued to rise; by the time Warner’s half-century arrived off just 29 balls, more than half the target had been erased already.

Fifty up off 29 balls for David Warner, his second of the tournament.#AUSvWI #T20WorldCup pic.twitter.com/f0Zqt09Mmw

Following on in his slipstream came Mitchell Marsh, belying his well-documented weakness facing spin with a colossal six off Finch’s conqueror Hosein. The spinner’s fall from grace continued with a botched stop on the boundary rope to gift the all-rounder another four, his own 50 coming one ball quicker than even Warner’s as the sting went out of the game.

The Windies’ bowling struggles in the UAE have encapsulated their woes this tournament; coming into this match, they’d taken just 14 wickets, fewer than any other side in the Super 12s. They’d finish with just two more, but the last was worth the wait: Gayle, handed a last over and not even deigning to remove his cap, would break the partnership, Marsh chipping to extra cover to spark scenes of delirium. With the match gone, even the Aussies couldn’t begrudge it.

Bravo, one of T20 cricket’s greatest bowling pioneers, would finish with 0/36 from his four overs, Warner ending what he’d started with a switch-hit four through point and another towering six over long-on; the latter even earned a smile from the 38-year old champion.

He and Gayle will continue to dazzle in domestic competitions the world over, but with their farewells, the Windies’ era of dominance in this format, spanning two World Cup titles and some of the most electrifying play in the game’s long history, is at last done.