MATCH REPORT: Wallabies will be 'filthy with themselves' as Scotland end winning streak

Scotland won a third straight Test against Australia and ended an ill-disciplined Wallabies’ winning streak at five in a tense Murrayfield battle dominated by the referee’s whistle.

Scotland, with seven British and Irish Lions players in their line up, scored two tries to one in a 15-13 victory in front of a boisterous crowd of 67,000 as Australia were ill-disciplined and error prone.

Wallabies coach Dave Rennie had complained of his team’s clunkiness throughout the winning streak and it was on show again throughout.

With James O’Connor at No.10 instead of Quade Cooper, the Australians looked less fluid and Nic White’s delivery lacked his recent sharpness.

But the biggest absence in the back line was that of Samu Kerevi, like Cooper and Sean McMahon missing the tour due to a dispute between the Australians and their Japanese club teams.

Hunter Paisami at No.12 was wasteful and twice penalised in the first half by finicky French referee Romain Poite while Australia were on attack within five metres of the Scottish line.

Poite was a central character but Australia contributed to their own downfall.

“I think they’ll be pretty filthy with themselves,” said former Wallaby Drew Mitchell on Stan Sport.

The Wallabies scrum was a mess, thanks to a sin bin from Allan Alalaatoa, and a HIA to his replacement Taniela Tupou that unsettled the Australians. There was no surprise Finn Russell’s winning penalty came from a scrum infringement.

“I thought they made some really good progression in the Rugby Championship in terms of playing heads up and combining with one another in open play,” said Andrew Mehrtens.

“But the last two games, the game in Japan and here – just aimless kicking where they seem bereft of ideas.

“Having the confidence and the vision to play quick hands as a group with cohesion, they missed that. They went back to kicking the ball away at times when they shouldn’t have.”

O’Connor had an opportunity to kick Australia into an early lead but badly shanked his penalty attempt.

Both sides tried to play with flair, and Scotland had the best raid of the early stages sparked by fullback Stuart Hogg, but the execution and infractions let both teams down. 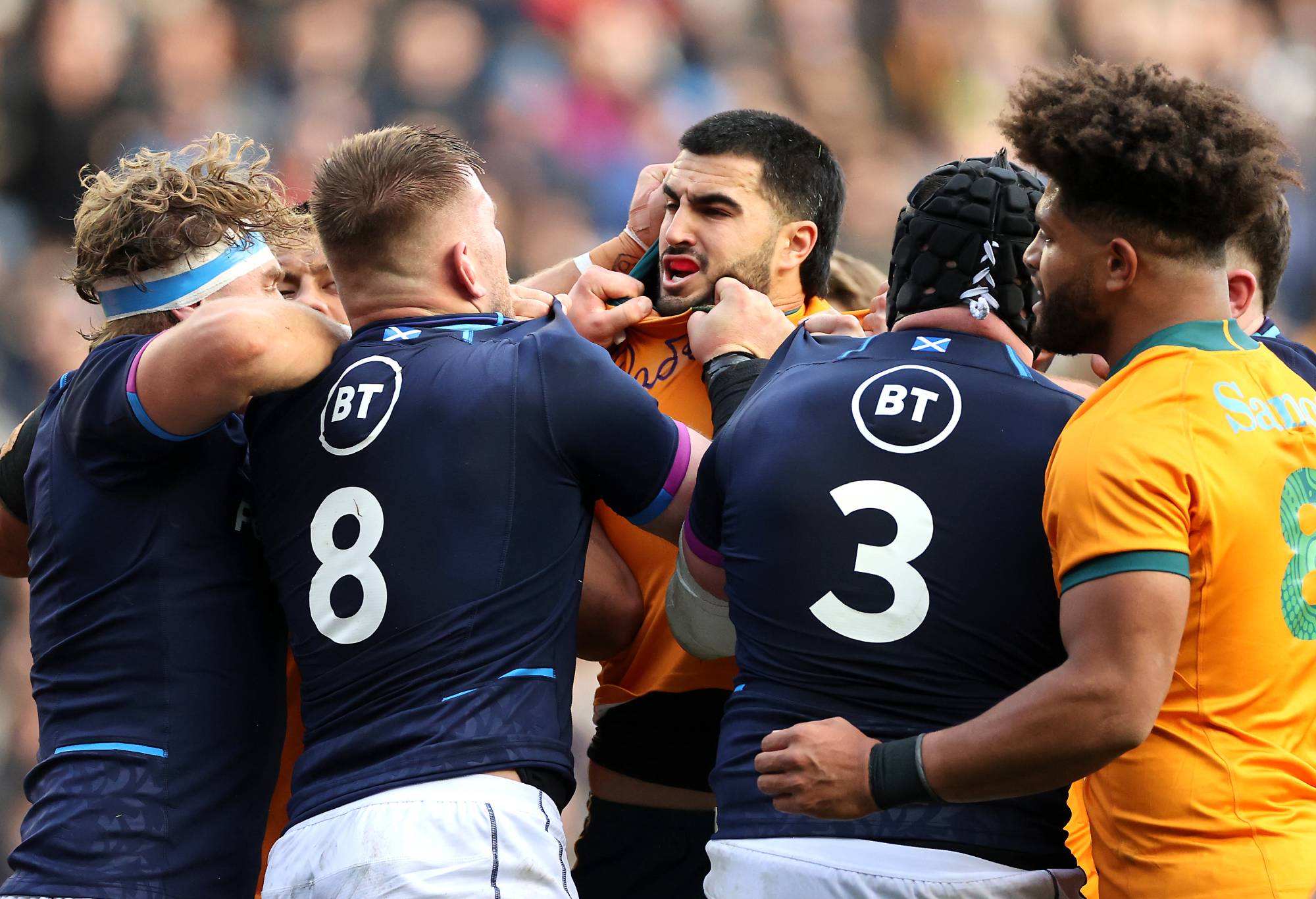 Scotland No.7 Hamish Watson forced inexperienced Paisami into conceding a penalty under the cross bar on 17 minutes and less than four minutes later Scotland struck the first blow.

Lock Grant Gilchrist snaffled a lineout close to the Australian line and from the rolling maul Watson crossed for the try.

Australia thought they had crossed for a try on 36th minute when Michael Hooper forced his way over from close range, but the TMO noticed a swinging arm from Allan Alalaatoa scrape the face of Scotland No.8 Matt Fagerson.

The try was ruled out and Alalaatoa was sent to the sin bin, a decision that left Hooper aghast.

“You can’t be serious … mate, I can’t believe that,” the Wallabies captain told ref Poite, who responded: “I am serious Michael. I know it’s a big decision but who did that is it me or is it [Alalaatoa]. It’s a big call I understand, but it’s clear head contact.”

“Lots of things to consider there – besides the fact that we want to go and kick something very hard right now,” said Harrison.

“No force mitigated it down from a red to a yellow – but there’s definite contact with the head.

“And the action of arriving at a breakdown, losing control of your body at a height with a swinging arm is telling. It is not about the ferocity of the action that brings in the head contact. It’s the head contact, arriving in a breakdown with force, out of control and making contact with a head and will give you a card.”

Earlier this campaign the Wallabies were twice destroyed by the All Blacks when down to 14 men. This time they managed to put on 10 points with Alalaatoa off the park.

O’Connor’s second penalty attempt, just before half time, was true and then four minutes after the break Izaia Perese, on for injured Jordan Petaia, made a stunning first impact on debut.

He produced a brutal step and burst that carried him strsight through the dual challenge of Lions halves Ali Price and Finn Russell and the movement set up flanker Rob Leota for his second Test try.

Less than three minutes later the former Brisbane Broncos NRL player came up with a huge play at the other end, his strong tackle jolting the ball free from Fagerson’s grasp as Scotland surged towards the try line.

Scotland, though, kept coming. They had a succession of attempts under penalty advantage inside the Wallabies 22 before replacement hooker Ewan Ashman, on debut, produced a breathtaking moment for his first Test try.

Standing near the left touch line he touched down while managing to keep his feet from landing in touch.

“That is an elite finish – the awareness to get the feet up and not touch the grouns,” said Morgan Turinui in commentary.

Poite and his ever-sounding whistle was always going to be a huge factor, and he presented Australia a lead on 65 minutes when Scotland flanker Jamie Ritchie was penalised and O’Connor slotted the penalty from in front.

Rennie took the chance to refresh his ranks, bringing on Will Skelton, Kurtley Beale and Tate McDermott in a bid to push for home but Scotland were the next to benefit from a penalty, Russell kicking the hosts back in front with 12 minutes to play.

Beale made a promising burst with his first touch but with seven minutes to go he got caught in possession and Scotland forced a scrum 10 metres inside the Wallabies half.

It took a huge push from the Wallabies to win a penalty and give them a glimmer with five minutes left, but as they tried to find a gap, Perese lost the ball forward in a challenge from Gilchrist.

Scotland surged down field and never gave up field position, closing it out.

“We had a sniff of it, but Scotland did really well grinding that out,” said Hooper.

“We did well in the middle 40 but dicipline killed us a bit, we allowed Scotland into our end too easily.

“I don’t think we executed our game plan and discipline wasn’t great.”