Denver was heavily in control all game and the score seemed closer than how far Dallas really were from the Broncos.

The game was started off very even as both teams came up empty on their beginning two possessions, however it didn’t take long for Denver to open the scoring as running back Melvin Gordon was able to end the 11-play drive with a three-yard run into the endzone.

They then forced a three and out before scoring on the very next drive as Teddy Bridgwater through a spectacular pass down field to Brandon McManus for a 44-yard touchdown.

The Broncos were able to shut out Dallas in the first half along with scoring a field goal to gain a commanding sixteen to nil lead at halftime. Despite this poor first half from Dallas, we expected their offense to wake up and put up a great fight to get back in the game.

However, this was not the case because before you knew it Denver had a 30-0 lead and already had the game in their hands. Two consolation touchdowns for the Cowboys bought them within 14. Despite this late effort Denver was able to close the game out with two simple kneels.

This game was won strongly through discipline as the Cowboys were trying to rush things, on the other side of things Denver were very controlling. The stats backed this up as the men in orange had possession of the ball for over double the time that their opposition did.

Denver also didn’t turn the ball over once and on the other hand Dallas gave the ball up twice. The Orange crush also travelled for over four hundred yards and the other side reached under three hundred yards.

The Dallas Cowboys were not what we expected today as they were looking like one of the hottest teams in the country lately but instead of recording another win, they had the game taken away from them before the end of the third quarter.

Dallas was horrible on both sides of the ball as their defence allowed 111 rushing yards and only able to score 51 rushing yards themselves. Ezekiel Elliot could just not find any room to move.

Dak Prescott was mediocre as he was ranked 16th in the league this week in the passing yards category and threw one interception plus was sacked twice. This loss proved how important Elliot’s running game is. When he got shut down the Cowboys struggled, and their poor defence did not help the case.

The Denver Broncos on the opposite side of things had a busy week as their star defender Von Miller was traded to the LA Rams after being a part of the Broncos squad for nine and a half years.

This loss did not seem to hassle them at all as their defence was one of the best in the league this week. They stopped Elliot for 52 yards which is incredible against such a strong and fast running back.

Teddy Bridgewater had an above average day as he didn’t throw an interception once however, did get sacked a total of four times. Javonte Williams had a great day as he rushed for over 100 yards which was fourth in the league for this week.

In conclusion the Cowboys will need to re-think things during this week after this bump in the road as they will have a second straight home game when they take on Matt Ryan and the Atlanta Falcons who I think they can beat.

On the other side of things, the Broncos will welcome the 3-6 Philadelphia Eagles to town who is another great defence, however I think they can win their third straight game. 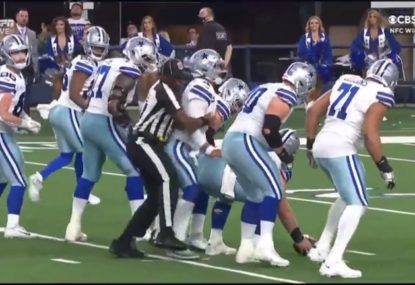