Argentina have been showing oscillations that prevent the generation of a sustainable gameplan.

During their July European tour, they had largely surpassed Romania, but showed the characteristic rust of a lack of interaction.

The next matches, against Wales, ended in draws and wins but consolidated a gameplan that would be deployed without better results in the Rugby Championship.

Using a 1-3-3-1 attack, it was essential to maintain possession, guarantee high-quality ball, and ensure the best decision-making, even in defence – nothing an orderly and disciplined team could not do.

But Argentina couldn’t consistnently score points (10 per Test) with the tries per visit to the opposition’s 22 ratio dropping to 14 per cent after scoring 32 per cent during the European tour.

Flattening of the game can also be seen in the poor results produced by the structure of attack and the scarce amount of variations introduced to dismantle the defence or induce error.

Beyond the second or third phase, it is advisable to insert variation, but – as we can see in the below video against France – Argentina multiplies their sequences until their attack opportunities are exhausted. Possession is prioritised, disregarding territorial gain.

They still do not stand at the breakdown. Since Tri Nations 2020, they have kept losing participation in the breakdown effectiveness ratio of rucks won vs rucks lost. 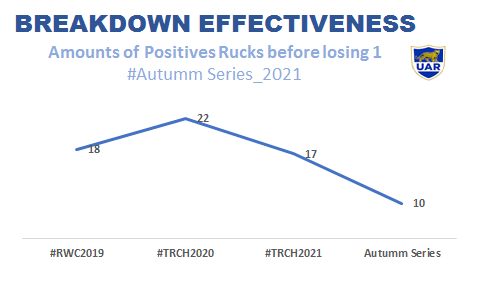 Mario Ledesma’s strategy of assigning key positions to men who have not played naturally in that position sees Santiago Carreras as a game driver, which is just one chapter of a novel that began in the middle of the last World Cup, when an attempt was made to replace Nicolás Sanchez with Jerónimo de la Fuente at 10, when the latter had no experience in the position.

This situation removes cohesion by eliminating internal competition focused on positions, as verified by the moderate performances of the players.