Defender Liam Jones is the senior Carlton AFL player who is yet to have his COVID-19 vaccinations.

The Blues are not commenting after it emerged on Tuesday one of their players was holding out against the AFL’s vaccination guidelines.

Under the league’s schedule, AFL players must have had their second shots by November 26, but Jones is not due to officially start his pre-season training until December 6.

Multiple media outlets have named Jones, who has played 161 games for the Western Bulldogs and Carlton.

Adelaide AFLW premiership player Deni Varnhagen, who works as a registered nurse, was last week moved to the Crows’ inactive list due to her anti-vaccination stance.

“I don’t agree with his choice not to be vaccinated; I think in a team sport like AFL, it is all about the team,” Cornes said.

“This is, in some way, putting the individual before the team and hurting his team in their plight to win a premiership.

“He’ll have to wear the ramifications of that, and that is probably finishing his career prematurely, unfortunately.”

Maginness was one of two positive cases reported by clubs on Wednesday, with the Blues also confirming a fully vaccinated member of their AFLW program has coronavirus.

Close contacts of Maginness will now isolate for seven days, but all of those players and staff have already returned negative test results.

Hawthorn confirmed all players are fully vaccinated or are scheduled to have their second dose soon.

Maginness attended the club’s Waverley Park facility on Monday but did not have any symptoms until waking up on Tuesday.

“I want to commend Finn for his diligence in getting a test at the first sign of symptoms, informing our club doctor and protecting his teammates and our staff,” Hawthorn chief executive Justin Reeves said.

“As a club we are taking every precaution to ensure the health and wellbeing of our staff and the broader community is maintained.

“Appropriate wellbeing supports have been put in place to support Finn and those who are isolating as a result of this case.”

Maginness has played three games for the Hawks since being taken with pick 29 in the 2019 draft.

He is the son of dual Hawthorn premiership player Scott Maginness.

The 20-year-old is the first known men’s player to test positive for COVID-19 since former Essendon defender Conor McKenna in June 2020.

Hawthorn football boss Rob McCartney labelled Maginness as the “poster boy” for what to do when experiencing coronavirus symptoms.

“We felt it was really important to take a lead on this,” McCartney told SEN.

“Even though it’s cautious in its approach, it’s the right approach … not only for our people, but their family and friends and the broader community.

“Finn was living his life in exactly the way and manner that we should have been.

“It wasn’t like he was attending big events or anything like that … unfortunately somewhere he’s contracted this virus.”

Several AFLW teams have been affected during this pre-season, with the Western Bulldogs isolating due to a member of their program returning a positive result.

The Blues also have a confirmed COVID-19 case, after the affected person conducted a Rapid Antigen test before AFLW training on Tuesday.

They immediately left the club’s headquarters without entering the facilities and undertook a regular test, which came back as positive.

Only one person has been identified as a close contact and has since tested negative, but will still need to isolate for seven days.

The commentators were mystified at how this mark wasn’t awarded to Courtney Jones. 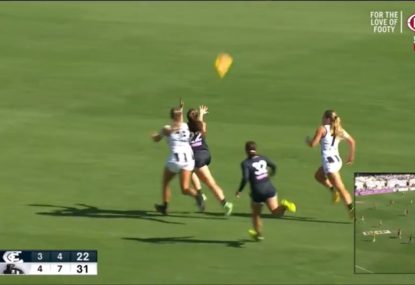 Just like that, a fundamental piece of the Carlton Football Club’s backline is gone.