Coach's Corner Issue 33: What now for the Wallaby midfield?

A big thank you to all who contributed a question, or helped develop one at the call-out stage.

[Samu] Kerevi is a very difficult player to replace as you effectively build an entire game plan around him… I am still struggling with Hunter [Paisami] at 12. He is not working IMO and the entire backline is not working with him at 12. Do we have valued alternative options or are we stuck with this?
– Olly

I was really disappointed with Whitey’s [Nic White] very average service to the outside backs. What do you make of Paisami’s performance next to JOC?
– Wallabies_Larkham

I saw someone comment over the weekend that NZ appears to have lost the art of a #10 that can control a game. With the Wallabies also struggling to nail down a consistent (and available) #10, I’d be interested to see who you think does that role particularly well at international level: i.e. controlling the game from 10 and really driving a team around through a combination of kick, pass, run.
– Kiwi Haydn

The 10, 12, 13 combination is not working. It was brilliant with Cooper and Kerevi, and we are trying to substitute like for like. Who do you recommend we have as the #10 and #12 for the next game?
– RugbyRah.

There seems to be a lot of chat about JOC and Hunter at 10 and 12. It seems everyone is missing QC and Kerevi. I’d like to say that I definitely miss the way we PLAYED back when QC and Kerevi were there in combination, but how much of the TEAM’S performance should be attributed to them in particular?
– WoolieJ

Lots of clouds gathering around the Wallabies midfield in the absence of Samu Kerevi and latterly, Quade Cooper. Let’s remind ourselves briefly of what Samu Kerevi brought to the Wallabies in the second half of the Rugby Championship. We will focus on the involvements of the number 12 at first phase from scrums:

The ball goes straight from number 9 to number 12, with Quade Cooper fading out to stay alive as a receiver on the following phase. Kerevi breaks all of the first three tackles to take play all the way up to the Argentine 22, and there is a nice option back to Rob Leota on the blind side on second phase. Store that one in the memory for future reference.

A number of the same moving parts were not working so slickly in the game against Scotland:

As I pointed out in Wednesday’s article, Romain Poite could, and should have penalised Scotland for any one of three clear offences in the course of the scrum itself – both of the two flankers for breaking off prematurely, and loose-head prop Pierre Schoeman for standing up and out of the scrum as the drive comes on.

Because Poite does not blow the whistle, Nic White is still under pressure at the base when he goes to deliver and makes a bounce pass to Hunter Paisami, who in turn is unable to breach the ad-line after he receives the ball.

When Paisami did get a clean ball and was able to achieve penetration in the Kerevi role, he was penalized for making a second movement on the deck while the action of the tackler was ignored:

The Scotland tackler (number 13 Chris Harris) takes over three seconds to release the ball-carrier and move away from the tackle. That is not “immediately” and it is very far cry from the way the tackle area was officiated in the Rugby Championship.

Australia eventually used their blind-side wing (Izaia Perese) to achieve the same impact as Kerevi, with Leota coming back to the short side to score on the following phase:

When the refereeing was not a factor, the Wallabies tended to lack one of the features that makes successful wide attacks work – a true-blue, credible threat on the short ball: 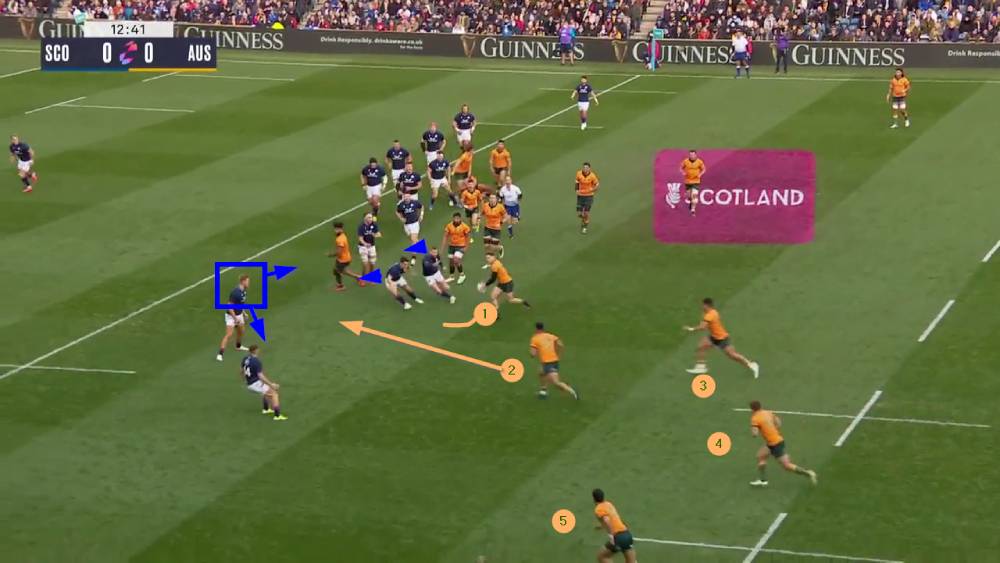 The key in this situation is to engage the Scotland defender in the rectangle (Harris) and make him believe that there is a real threat to his inside shoulder. He is not convinced and moves off comfortably to the outside to make a tackle on Jordan Petaia.

A longer sequence occurred later in the half:

In this instance, Hunter Paisami is being used as the first back-line receiver with James O’Connor outside him. With no running threat coming from Paisami, the Scotland defence is able to shuffle out quite comfortably towards the far side-line and prevent any hint of an overlap.

A couple of phases later, and the scenario had a quite familiar look: 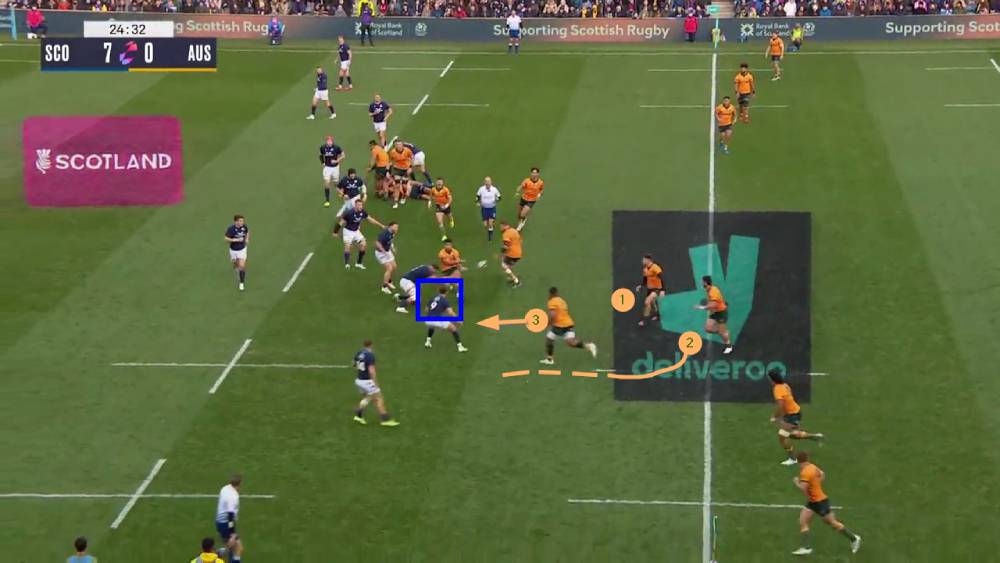 Once again, Hunter Paisami is being used as a passer rather than a runner and there is no convincing short-ball threat. There is space beyond the Scotland number 9 Ali Price (who has already turned in toward Paisami) but the eventual receiver (Tom Wright) is too deep to exploit it before the hole closes.

The Wallabies are entitled to hope for more accurate officiating at scrum and breakdown from Jaco Peyper at Twickenham than they got from Romain Poite in Edinburgh, in order to unleash Hunter Paisami on first phase. As the phase-count rises, there is clearly an issue with the use of Paisami at first receiver and the creation of a credible short-ball threat which preserves the width of the field for the attack.

Interested in your take on our rolling maul from lineouts and on the Scots defending it. I found myself thinking they were offside but they got away with it and we couldn’t consolidate. It was frustrating.
– Phil

Agree. They repeatedly came around the side and just stood in the way obstructing either the ball carrier or the half. Got away with it all day.
– Sgt Pepperoni
It did appear they didn’t change binds. I must admit I’m not clear on the laws on what they can do when the maul moves forward and they find themselves on our side.
– Phil

A couple of years ago I wrote an article on The Rugby Site, after a game where Leinster had struggled to move the lineout drive forward against Treviso because of their effective use of defenders on the edge of the maul:

It’s a big grey area in an antiquated area of rugby law. The problems begin with the definition of offside at the maul.
Laws 16.4 and 16.5 indicate that:

“5. A player must either join a maul from an onside position or retire behind their offside line immediately.”

In practice, as long as a defender joins from an onside position and maintains his original bind on the edge of the maul, he is free to move as close to the ball-carrier as he wants. Here is one of the most flagrant examples from the source game:

Leinster appear to have a solid set-up for the drive, but the Treviso number 7 swings his body around the right edge of the maul until he sitting next to the Leinster ball-carrier and the ball has to be moved out. It is not illegal because he always hangs on to his first bind.
Scotland used much the same technique on Sunday: 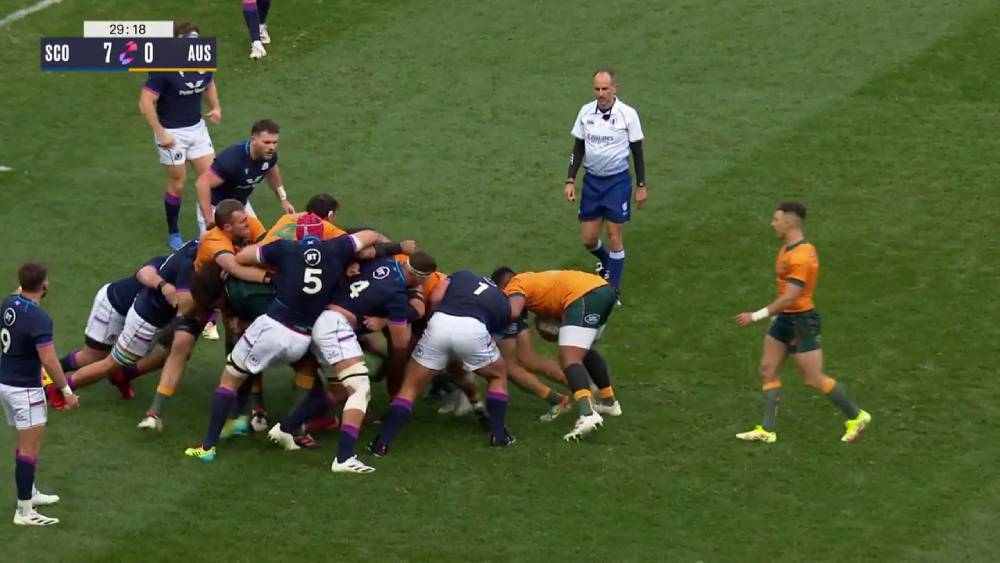 The Scotland number one Pierre Schoeman maintains his original bind as he swings around the side, and eventually finishes as the closest player to the ball-carrier Folau Fainga’a. At that point, no further progress can be made.

Here is a view from the reverse angle during a second half sequence:

Keep your eyes on the man in the red hat (Scotland second row Grant Gilchrist). He does little more than hang on to the coat-tails of number 19 Will Skelton throughout the maul, but he can still alter his positioning enough to close in on the Wallabies’ hooker and ball-carrier and make release difficult.

In such circumstances, it is essential that the referee is aware of any changes in binding as the defender swings around the corner:

This should be a penalty to Australia. Scotland number 6 Jamie Ritchie clearly changes his bind as he circles around Izack Rodda on the right corner of the Wallaby drive, but it goes unnoticed by Poite.

Don’t forget to look in again next week!