The Roar
12th November, 2021
163
Join the conversation
3203 Reads
Advertisement
Write for The Roar

Australia have produced a finish for the ages to stun Pakistan in a classic T20 World Cup semi-final, some nerveless, brutal ball-striking from Matthew Wade and Marcus Stoinis at the death ensuring a famous five-wicket win.

Wade’s heroics off the penultimate over, following up a dropped catch in the deep with three consecutive sixes to erase the final runs needed with an over to spare, will take much of the spotlight. But his 41 off just 17 balls was beautifully paired by Stoinis, whose own 31-ball 40 featured the boundary blows that got Australia believing again after a middle-overs squeeze from Pakistan. The pair would put on 81 in just 40 balls, a repeat of their successful closing out of the crucial group stage game against South Africa, but amped up to eleven for both the importance of the moment and the difficulty of the challenge.

The win secures a Trans-Tasman final against New Zealand in Dubai on Sunday, and a chance at a maiden T20 World Cup crown, the last trophy left to secure for the Australian cabinet. For Pakistan, it’s a heartbreaking end to a stellar tournament, their 16-match T20I winning streak in the UAE coming to an end at the worst possible time.

>> Australia vs Pakistan: as the semi-final happened

With 10 of 11 matches played in Dubai this tournament won by the side chasing – the one exception a day match where the Black Caps held off Scotland – Aaron Finch’s victory at the toss, giving the Australian bowlers best use of the conditions, loomed as crucial.

However, where wickets tumbled in the PowerPlay overs against the West Indies and Bangladesh, two quarter-chances were the sum of the toil for the Aussies as Pakistan openers Babar Azam and Mohammad Rizwan held firm. The captain in particular looked keen to impress, unveiling the shot that has made him a global sensation with a cover drive off Josh Hazlewood that oozed class.

Both opportunities involved the latter opener – David Warner nearly pulling off the catch of the tournament running from mid-off to the boundary but conceding four instead, and Adam Zampa failing to cling on to a flat pull shot to fine leg. Neither were easy; but for a team that has seldom erred at critical stages this tournament, they loomed as vital missteps. With a flipped six over square leg off Hazlewood, Rizwan quickly began to make the most of the life.

47 PowerPlay runs for no wicket was Pakistan’s best of the World Cup, and only Australia’s second wicketless start, after their crushing loss to England. But the following overs have increasingly been dominated by Zampa the longer this tournament has worn on, and again it was the leg-spinner who did the job the much-vaunted pace attack could not.

He’d concede just seven runs from his first eleven balls, denying Babar width for his pet shot or Rizwan anything straight to mow to the leg side; together with spin twin Glenn Maxwell, the openers were successfully strangled. On his twelfth, Babar finally cracked; his lofted shot down to long on finding only the safe hands of Warner, who wouldn’t miss a second chance to impact the game.

It was the crowning jewel on what was perhaps Zampa’s most complete performance in an already spectacular World Cup; figures of 1/22 off his four overs, the one blemish an authoritative slog sweep for six by Rizwan to make the leggie rue his fine leg drop all the more, had him in Player of the Tournament calculations.

But for much of the innings, Zampa’s hand was a lone one, the quicks struggling with their radar as the infamous Dubai dew appeared to settle in earlier than usual. An uncharacteristic waist-high full toss from Pat Cummins, gifting four and a free hit to the building Fakhar Zaman, was as uncharacteristic as it was frustrating for Finch. Hazlewood would follow suit, his pulled for four by Rizwan to further dent ugly figures of 0/49; comfortably his most expensive spell of the tournament, and his worst T20I figures since 2016.

Rizwan’s half-century, brought up off 41 balls following another industrious hoick over cow corner off Hazlewood, would further cement Pakistan’s hold on the match; the keeper-batsman making good on those early chances. 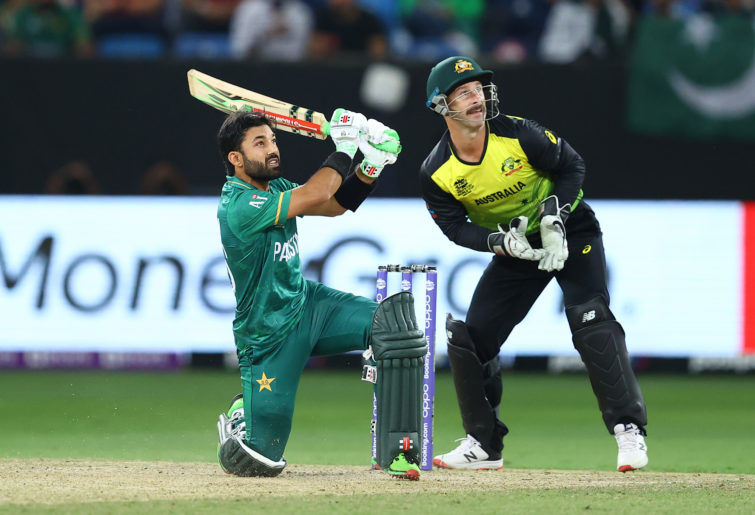 Mohammad Rizwan of Pakistan plays a shot while Matthew Wade watches on.. (Photo by Michael Steele-ICC/ICC via Getty Images)

It would take Australia until the 18th over to add a second wicket, Rizwan skying to Steve Smith at mid-off for 67. When he was followed in subsequent overs by Pakistan’s most lethal finishers Asif Ali (chipping a Cummins slower ball to Smith at long-on for a first-ball duck) and Shoaib Malik (bowled slogging Mitchell Starc at the death for 1), the underdogs seemed a chance to limit the tournament favourites to under 170.

Cummins, in particular, was outstanding, just three runs from the penultimate over – one a leg-bye – and the wicket of Ali making amends for some earlier struggles, and described as ‘fantastic’ by none other than fast bowling great Dale Steyn in the commentary box.

Fakhar, though, had plans of his own. With a simple Smith drop at long on denying Cummins two wickets in two balls and affording the left-hander the chance he needed, the 31-year old would finish the innings in style, two enormous final-over sixes off a wayward Starc lifting Pakistan to 4/176 from their 20 overs. It seemed, at the time, enough.

Any hopes Australia have of continuing the chasing supremacy in Dubai were given an early shake, Finch trapped LBW by a swinging pearler from first-over maestro Shaheeen Shah Afridi for a golden duck. It was an identical dismissal, down to his score and balls faced, to how the captain fell early in their ODI World Cup semi-final loss to England in 2019.

On commentary duty, green and gold great Shane Watson made note of Finch’s average of 173 against left-arm bowlers in T20I cricket; that ‘great sign’ turned out to be simply the ultimate commentator’s curse. While Mitchell Marsh survived his own late-swinging missile one ball later, with a Pakistan review finding only a pair of umpire’s calls, the scene had been set.

It fell to Warner, as it did against the West Indies, to take centre stage. Together with Mitchell Marsh, the opener, derided as out of form and all but washed up mere weeks ago, began to rescue the innings from the perils of 1/1. Targeting the usually miserly spinner Imad Wasim for three straight boundaries in his second over was vintage Warner, as was his ruthless six off a bizarre double-bounce ball from part-timer Mohammad Hafeez’s first delivery of the night. 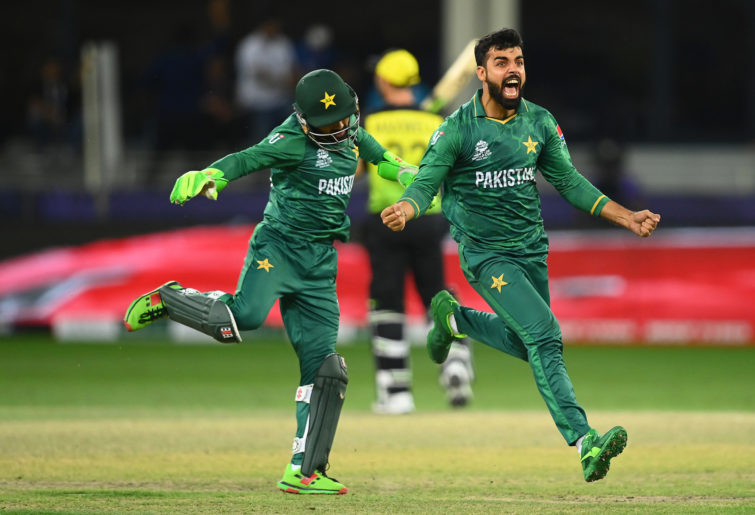 With Marsh more than holding his own, welcoming Haris Rauf into the attack with a disdainful pulled six as part of an over that cost 14, the Aussies surged ahead of the net run rate. Pakistan’s own leg-spinner in Shadab Khan, though, would prove harder to get away; duping first Marsh for 28, and then Smith for only 5, into skying well-flighted balls to the boundary fielders on the leg side.

At 3/77, Warner’s wicket loomed as the match in and of itself; when he walked for an edge behind off Shadab again, the vocal UAE crowd, which has embraced Pakistan as their own in their last decade as nomads, was at fever pitch. But drama was unfolding as Warner walked off; replays revealed the opener had seemingly missed the ball. With a review in hand, Warner’s decision could only be confusion or the most stoic act of honesty; either way, the Aussies could only rue it.

Glenn Maxwell soon followed, his trusty reverse-sweep coming unstuck just as his tournament has as Shadab claimed a fourth. Caught on the boundary for just 7, the Victorian’s ugly campaign, along with a disappointing ODI World Cup in 2019, have begun to take the gloss of his legacy as a limited-overs master. The Pakistani, though, had no such concerns, his 4/26 the best in a T20 World Cup semi-final. For all Zampa’s earlier heroics, there was no doubt who the game’s premier leg-spinner was.

Just as they were against the Proteas, Marcus Stoinis and Matthew Wade were the last recognised batsmen standing for Australia; the target 81 off 46 balls, then 50 off the final four overs. A gettable total for the Black Caps the day before, and Aussie fans dared to dream when Stoinis crunched the expensive Rauf for a six and a four to take 13 off the 17th over.

15 off the next, with Wade taking Hasan Ali for twin boundaries of his own, had many Pakistan memories drifting to the 2010 T20 World Cup semi-final, in which Michael Hussey’s magnum opus saw Australia run down 48 from the final three overs with a ball to spare.

A six from Wade off Hasan Ali in the 18th brought the required rate down to fewer than two a ball; then, when Hasan dropped Wade in the deep an over later, the tide was turning Australia’s way. It would prove the most crucial moment of the night… and Wade would make him pay instantly.

One ball later: six, a ramp shot off a 148kph Afridi sizzler that has to be in the reckoning for shot of the tournament, for the audacity of the decision as much as the flawlessness of its execution.

Next ball: six more, in more classic Wade style, the Pakistan star drifting into the slot and deposited over mid-wicket. From two a ball, the run rate was down to under one.

But there could only be one way to finish; another Wade ramp, as spectacular as the one before, providing the ultimate exclamation mark; a third six to end the chase, and surely the high point of Wade’s decade in Australian colours across all formats. 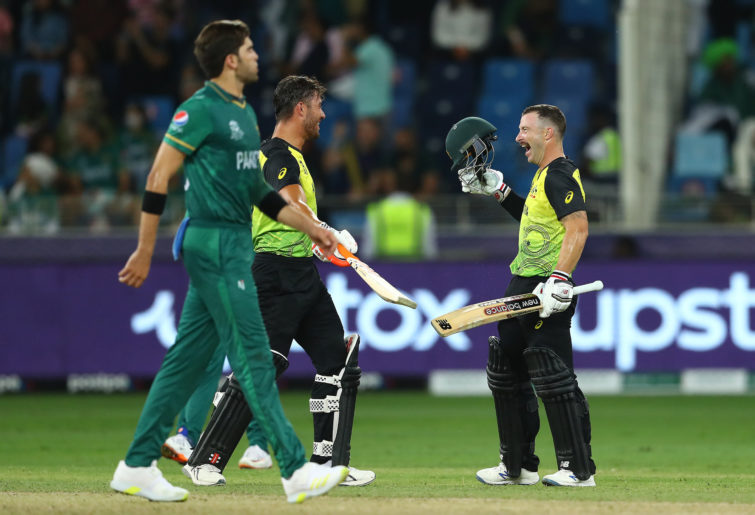 Australia have much to ponder ahead of Sunday night’s final; Smith’s painful innings once again highlighting his shortcomings in the shortest format, and surely at least prompting consideration off a shock recall for reserve batsman Josh Inglis. So, too, will the fast bowling battalion have to improve from their haphazard effort, Cummins’ finish notwithstanding. Glenn Maxwell’s form remains a concern; that one of his generations most scintillating ball-strikers is scoring at under a run a ball this tournament is an extraordinary development given how far his team have come in spite of it.

But for all the concerns, Finch’s charges won’t care a bit. The favourites are out; the T20 throne lays bare, and the Aussies are one win away from the unlikeliest of championships.