ANALYSIS: So little time to fix so many holes with RWC 2023 rushing at the Wallabies

The disjointed 32-15 loss to England was a major jolt that reminds us all of how much improvement the Wallabies must find before the 2023 Rugby World Cup.

The Wallabies now have just 20 Tests before they run out against likely pool opponents Georgia in Paris in September, 2023.

That’s a very short time to teach Hunter Paisami how to pass from left-to-right, find a fullback, improve all our hookers by 20 per cent and settle on a blindside flanker. 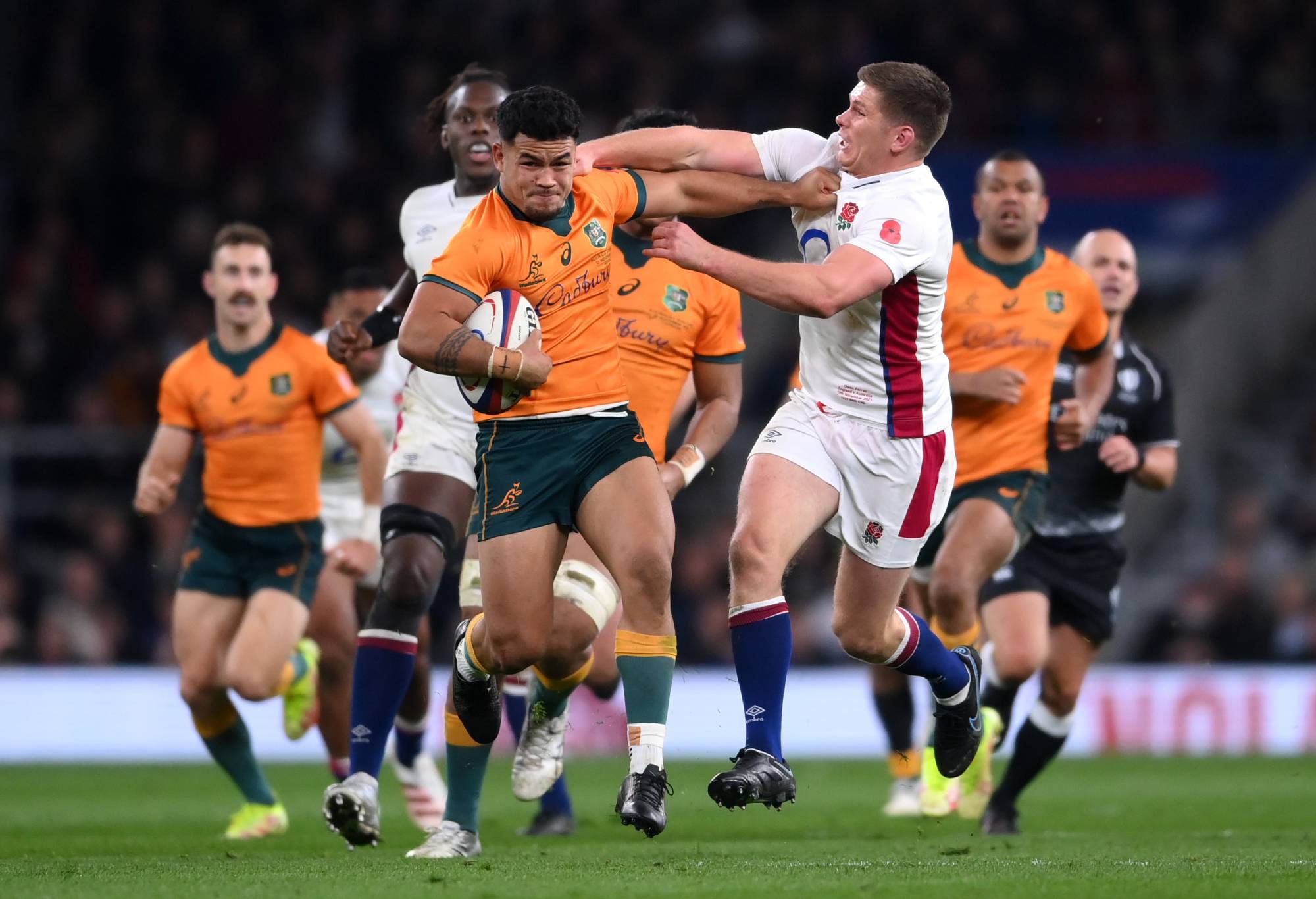 They are just some of the most obvious points and all were apparent even before skipper Michael Hooper led the team onto Twickenham early on Sunday morning (AEDT).

You can pick apart the Australian performance in myriad ways once we look beyond the bravery, hang-in quality and character that the Wallabies did show.

For two weeks in a row now, the Scots and English have shown us what precision passing and setting up holes for punchy runners looks like in the backs.

We should all be over the idea that the Wallabies have somehow inherited the “running rugby” expertise of glory teams of the past. We show it in fits and starts, at best, and only once in this Twickenham Test when it was already lost.

Inside centre Paisami made two superb low tackles to fell steamroller Manu Tuilagi and made the one decent break for the Australians.

More critical was how dire was his awful, high, left-to-right pass to Kurtley Beale midway through the second half when there was a hint of something on.

Fullback Beale’s days as an exhilarating figure are now behind him. At his best, he was always a metre quicker than the rest of the game because of his anticipation, ambition and timing. At 32, he has dropped back to the same pace as the rest of the game. That’s no knock, just reality.

His bungled right-foot grubber kick in the closing minutes was less about him than the Wallabies’ attacking pattern lacking any cohesion.

Coach Dave Rennie got some real rhythm to the backline when Quade Cooper-Samu Kerevi-Len Ikitau was the axis in The Rugby Championship.

All the best sides keep their patterns when one or two players drop out but the Aussies are not yet at that evolved level. The glimpses of back play were untidy and always under the pressure applied by England.

The English have unearthed a good one in Marcus Smith, the Manila-born flyhalf. He’s only 22 and this was his fourth Test. The feint before the pass that put fullback Freddie Steward over for the first try was excellent and in the face of the defence. It’s not yet something that Australia’s young gun Noah Lolesio has consistently in his arsenal.

This Test performance was a step backwards.

Fans dreamed that twice beating world champions South Africa really had bumped us up to No.3 in the world.

The Wallabies don’t have one big, dominant trait like the Kiwis’ high-tempo attacking skill or South Africa’s physicality to swamp opponents. It’s slick execution to win or it’s nothing. This was a nothing and it was very poor at times, especially with the ill discipline of two careless high tackle yellow cards and 18 penalties conceded.

It’s overdue for the English to change the O2 sponsorship logo on their jerseys. At the very least when they next play the Wallabies it should read 08.

The Wallabies have had more success against the All Blacks in their past eight Tests with a win and a draw than against England (eight straight losses).

Flanker Rob Leota has been a good find but all the blindside flankers tried by the Wallabies this year have to stay in the game more.

When you see the mark that England hooker Jamie George had on the Twickenham Test with his well-timed ball-carries, you have to accept that Australia’s hookers aren’t showing extra dimensions.

So to Wales in Cardiff next Sunday morning (4.15am AEDT).

It’s a match-up of great importance because Australia v Wales in Lyon on September 24, 2023 will again decide how favourable is the Wallabies’ advance to the knockout stages of the tournament.

The Wallabies must win in Cardiff to finish the year on a high. It would mean we could grab onto the positive results of 2021 rather than be stuck with a three-Test losing streak to diminish it.