Eddie Jones extended his dominance over Australia as England coach to eight straight wins after the Wallabies’ dogged but doomed challenge in front of 80,000 fans at Twickenham.

With South African referee Jaco Peyper and his TMO at their finicky worst, Dave Rennie’s men were beaten 32-15 in a game where England scored the only two tries – 73 minutes apart.

The Wallabies twice lost players to yellow cards, and inspirational captain Michael Hooper to injury. It will be a source of huge frustration to Rennie that he came into this marquee Test without several front line talents through injury – including tighthead props Taniela Tupou and Allan Alaalatoa – or failure to tour.

It could well be the end of the road for Kurtley Beale, whose 94th Test, starting at fullback, was a bust, with poor handling and decision-making hampering the Australians on several occasions.

Hooper agreed that “ill-discipline” had cruelled his team.

“We had low amount of territory, England controlled the game well there, we’d go back in our zone and they’d take points.

“We hung in there really well with two yellow cards, fought really hard but it blew out there in the end.

“It’s something we can control but in terms of other discipline we’ll go back review it. We were in the game, right to the death of it, the score’s not going to flatter us despite doing some really good things.”

O’Connor kicked the opening points of the match in the fifth minute but Australia led for just two minutes before England crossed through fullback Freddie Steward, set into a gap by England’s golden boy No.10 Marcus Smith and finishing it off with a shimmy and swerve past the last defender.

England were dominant but O’Connor from the tee, and some scrambling defence, kept the Australians in touch.

The visitors suffered the first of two yellow cards in the 30th minute when Tom Wright was given a stint in the bin for a dangerous tackle to stop a rampaging Jamie George – Peyper mistakenly pulling a red card from his pocket before quickly addressing the error.

England smelled blood and it took an incredible try saver from Nic White to stop George from crossing wide on the right, doing enough in a desperate dive to dislodge the ball. White added insult to injury with a few words in George’s ear and the England hooker was sufficiently hurt to not come out for the second half. 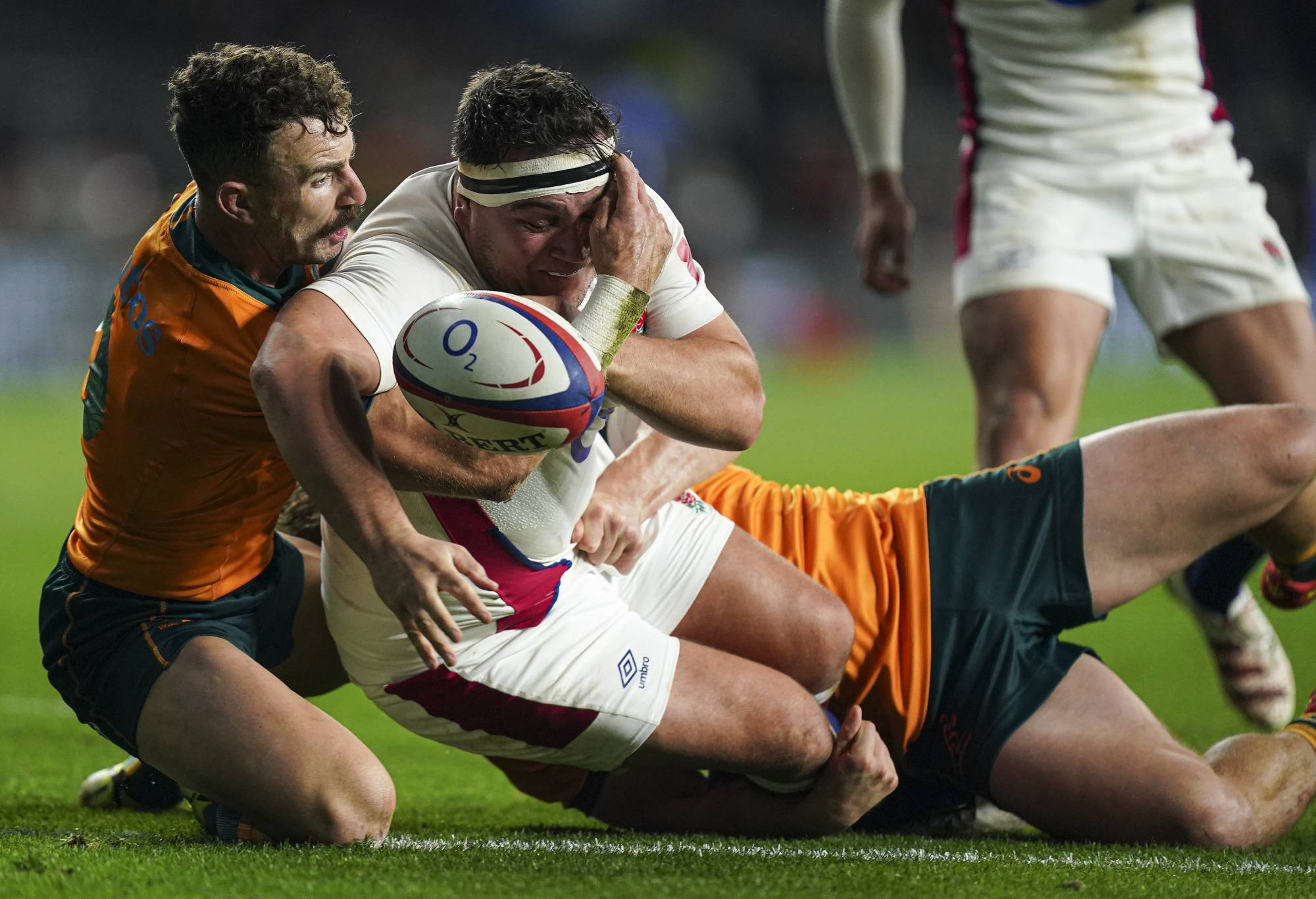 England had been on the verge of going up 23-9 but for White’s ‘George Gregan moment’. Instead the Australians rallied and a fourth O’Connor penalty saw the teams go to the sheds at 16-12.

O’Connor’s early penalty cut the margin to a point before Farrell kicked his third, to go with a conversion, to restore a four-point lead.

With 25 minutes to play, the Wallabies suffered another loss – captain Michael Hooper, a virtual ever-present this campaign limping off injured after another action packed performance.

Australia managed to get into some dangerous territory but their issues with lack of discipline and errors continued to dog them – “brave and inaccurate” as Morgan Turinui described it on the commentary.

A poor high pass from Hunter Paisami was grassed by Kurtley Beale, Australia’s ninth handling error, and the pressure ultimately told with Farrell nailing a penalty to extend the margin to a converted try with 15 minutes to play.

Again Australia had some potential field position, amidst a blur of replacements including Australian prop Ollie Hoskins on debut, but a loose lineout was poached by England.

A TMO intervention penalising Nic White for a barely perceptible change of line as he chased back to follow the line of an English kick gave the hosts another penalty in range. It sailed over and the 10 point margin with eight to play sealed Australia’s fate.

“It was a frustrating game to watch from a Wallabies fan’s perspective,” said ex-Wallaby Drew Mitchell. “So many times inaccuracies with passes, discipline, cost them dearly and we weren’t able to put England under sustained periods of pressure.

“That was the complete opposite for England. England had us under pressure.”

White summed it up: “We weren’t able to build any momentum or strong phases in the game and all of that is our fault. ”