World Cup hero Mitch Marsh has revealed how a “change in mindset”, coupled with relentless hard graft, laid the foundations for his crowning moment on Monday morning (AEDT).

After claiming man of the match honours in the T20 final against New Zealand, slamming an unbeaten 77 from 50 balls as the lynchpin of Australia’s run-chase in Dubai, Marsh’s immediate focus was celebrating at a rooftop bar rather than his chances of Ashes selection.

Whether or not he earns a Test recall for the series starting at the Gabba on December 8, the much-maligned all-rounder is hopeful that “Australians are proud of me and proud of this amazing cricket team” following their efforts in the UAE.

The ultimate glory capped off a sensational period in the shortest format for Marsh, who was the leading run-scorer in T20 series against the West Indies and Bangladesh in July and August as he made the most of batting at first-drop.

However, the 31-year-old said it was a tour of New Zealand near the start of the year that set him on a path to domination in the final – evidenced by a first-ball six off Adam Milne that gave Australia the momentum to cruise to 2/173 after 18.5 overs.

“There has been a change in mindset, that’s for sure,” Marsh said.

“[Australian assistant coach] Andrew McDonald, I remember very clearly we had a conversation in our tour of New Zealand, more so when I was batting back at the end [of the innings].

“It was about that you can change the game by getting on top of teams from ball one. 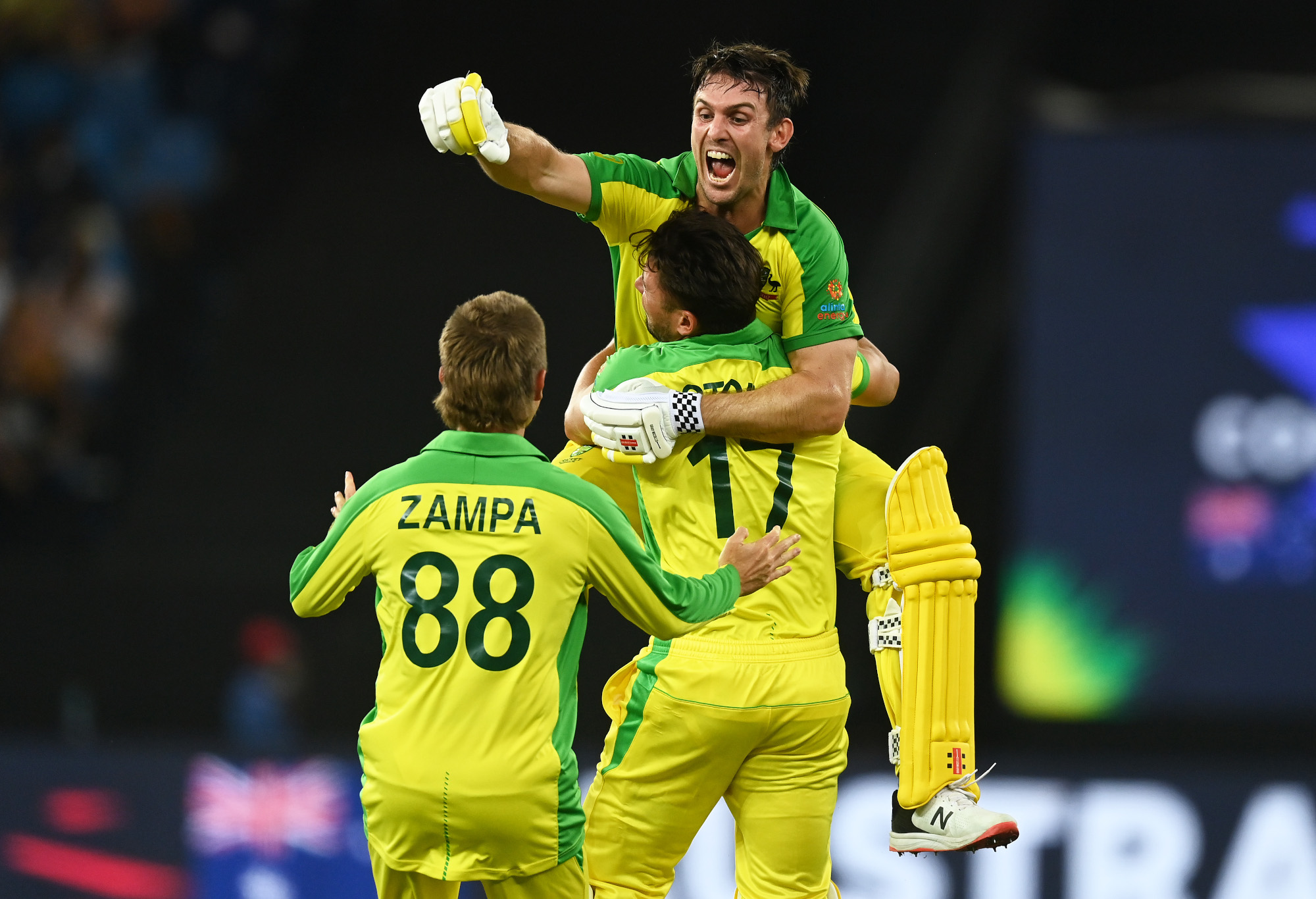 “All the best players in the world have the ability to do that, so I went away from that tour and worked with my batting coach Scotty Meuleman and worked extremely hard to change my game to be able to hit more sixes from ball one.

“But more so just the mindset. Some of the guys we’ve got in this group – talking to Marcus Stoinis has been huge for me about having a presence. You see the presence that he has when he goes out to the middle of the wicket.

“I think it’s a mindset thing for me. It’s backing your ability against the other best players in the world and having fun.”

Marsh, Australia’s second-leading run-scorer at the World Cup behind David Warner with 185 runs at 61.66 across five innings, has often unfairly been a punching bag for critics amid form and injury struggles.

In 2019, he told a press conference that “most of Australia hates me”, though he clarified on Monday that his comments were “a bit of tongue-in-cheek”.

Still, Marsh would have been justified in firing back at his knockers.

Instead, he insisted that “I certainly don’t go out playing cricket thinking about that sort of stuff” and lauded his teammates.

“Just super proud of this whole team. For me personally, to be able to stand up in the final like that and get us over the line was just magic,” he said.

“As you can imagine, just over the moon … When you get a close team – people wanting to play their roles no matter what it is – this is what you get when you’ve got this much talent in our team.

“I’m certainly very confident in my ability now. I’ve touched on speaking about my journey and the ups and downs – and all those experiences just build resilience.

“That sort of stuff has got me to the point where I was able to go out and perform in a World Cup final. I leant on all those experiences, both amazing playing cricket for Australia and WA and the tougher experiences, but that’s no different to anyone else.

“Everyone’s got their own story, everyone’s been through ups and downs. I think what stands out for me most is the love in this team … I’m not going out there to play for my spot or to show people or prove people wrong.”

While Marsh hasn’t been part of Australia’s Test set-up since the 2019 Ashes tour, his commanding white-ball touch has put him in the frame to bat in the middle order.

He confirmed he would fly to Queensland “with all the Ashes boys”, including Warner, Steve Smith, Josh Hazlewood, Pat Cummins and Mitchell Starc, and is likely to play in a three-day intra squad game from December 1-3.

But Marsh indicated he doesn’t expect Ashes selection in Brisbane, saying he is keen to play for Australia A in their match against the England Lions starting a day after the first Test begins.

“I imagine I’ll be back to the [Perth] Scorchers for the Big Bash and trying to slog a few,” he said.