Just like that, a fundamental piece of the Carlton Football Club’s backline is gone.

The mandatory vaccination has brought debate amongst many industries across the country and the AFL has certainly taken no chances for the upcoming 2022 season.

Unfortunately this comes at the detriment of the Blues, losing key defender Liam Jones to retirement, forced out due to the mandatory vaccination rule across all 18 AFL squads.

So how will this affect the club going into 2022?

Jones started his career at the Western Bulldogs in 2010, an up-and-coming forward who offered great leads and contested ball-handling inside forward 50. Jones made the move to Carlton in 2015, slowly beginning his transition into the defensive lines, ultimately securing the spot deep into the 2017 season.

His standout game was in Round 22, 2017 at Marvel Stadium, where Jones’ defensive efforts enabled the Blues to secure their first win against the Hawks since 2005.

Jones’ main asset was his contested mark ability, highlighted through his elite ranked statistic of 4.2 intercept marks per game, along with his ability to crash the pack and spoil to create defensive stoppages, exemplified with his above-average rate of 7.3 spoils per game throughout the 2021 season.

Jones’ unique strength was his one-on-one ability, giving the opposition a hard time creating leads, winning an average of six one-on-ones per game, classified within the elite level. The lack of this will certainly be felt by the Blues.

Do they possess the depth in quality to replace the missing piece in the backline?

Caleb Marchbank holds the ability to play his role as a shutdown defender, however he suffered a season-ending neck injury in 2019, only to suffer from an ACL injury in the final preseason game of 2020. Consistency becomes the key for the key defender to maintain his spot in the 22 each week.

Over Marchbank’s 38 senior games, statistically he has matched Jones, averaging higher rates of rebound 50s, intercept possessions and ground-ball gets. Furthermore, Marchbank has proven his versatility with the ball in hand, with a higher disposal efficiency percentage compared to Jones’ over their careers, 76 per cent to 69 per cent.

Marchbank has the potential to fill the void, however his recovery and consistency will earn him the spot. The signs are good so far, with Marchbank looking hopeful to return to a modified training schedule ahead of the Christmas break.

After Marchbank, there are a plethora of half-backs, however few are equipped to suit the lockdown, key-defender role required. With the AFL seemingly unlikely to offer the Blues a priority pick to compensate for the loss of Jones in the 2021 draft, the likely proposition is a positional change.

For Michael Voss, Mitch McGovern is the man. Proven in the last round of the 2020 season against the Lions, the change brought out a much more composed side of McGovern. 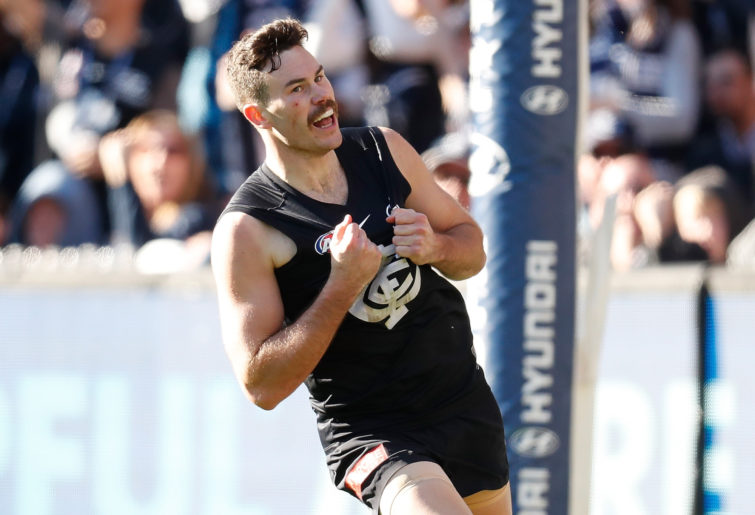 Mitch McGovern can be important for the Blues. (Photo by Michael Willson/AFL Photos via Getty Images)

McGovern would bring a forward’s perspective from the positional and tactical standpoints. This is similar to what St Kilda defender Jarryn Geary did to the Blues in 2020, with the Saints utilising Geary in the forward line to outsmart the defensive structure.

This is the last resort if McGovern is unable to find consistency however.

Will Jones’ absence be truly felt for the Blues in 2022 or is there enough time for change?