'Nailed to the cross with velcro': Erasmus and World Rugby outcome a stunning triumph for both

Finally, the festering boil attached to the backside of World Rugby has been lanced and salved.

In a stunning vindication for Rassie Erasmus and a triumph for the game’s ruling body, an outcome has been brokered which allows each side to walk away from Erasmus’ disciplinary hearing with their heads held high.

In upholding six charges of misconduct against Erasmus, including one of threatening a match official, World Rugby appears to have thrown the book at Erasmus. The punishment, effectively a ban from any further involvement in this weekend’s Test match against England, no match day presence in next year’s Rugby Championships, and a $37,000 fine, to be paid by the South African Rugby Union, paints a different picture.

Erasmus wasn’t with the Springboks for this year’s Rugby Championships – $37,000 to swing a Lions series your way? Some would say, that’s a bargain.

The real punishment for Erasmus is that, having only been fixed to the cross by velcro instead of being nailed to it, he now has to deal with the disappointment of not being made a martyr.

Instead, he will have to accept being a mere South African icon; if not bigger than Mandela, certainly the biggest national hero since Pieter Van Zyl passed on some pertinent refereeing advice to Irishman David McHugh, back in 2002.

HARRY JONES’ ANALYSIS: HOW THE DECISION WAS REACHED

Reaction from the parties and the wider rugby world has been swift.

World Rugby immediately issued a statement clarifying the time frame and support for their legal representatives. “We hope people understand why we had to rush the process and announce our decision before Xmas,” a spokesperson said.

With respect to concerns about the affair having become a lawyer’s picnic, they added; “It takes a lot of commitment to become a QC. Whilst it is disappointing to have to put on hold our investment in emerging nations and women’s rugby, we hope that participants understand the need to divert funds into this area of need, at this challenging time for the legal profession.”

Indeed, The Roar spoke with 14-year-old Kiba Sangay, a keen female junior rugby player from Bhutan, who said; “It’s true that my teammates and I were looking forward to receiving a set of rugby jerseys and a new rugby ball, but we understand that World Rugby has only so much money to go around, and we are glad to have made our small sacrifice to ensure that Mr. Erasmus received proper justice.”

World Rugby also announced that their decision applies retrospectively, and takes into account all outstanding South African grievances. Accordingly, South Africa has rightfully been awarded the 2011 Rugby World Cup and Bryce Lawrence will finally stand trial for his crimes.

For his part, Erasmus has been flooded with wishes of support, including the offer of a new movie deal from famed Hollywood director, Clint Eastwood. Eastwood is already well known in rugby circles, having made the 2009 mockumentary ‘Invictus’, which told how the remarkable, heroic 1995 Springboks overcame the all-conquering All Blacks, without ever once mentioning how their opponent was stricken by food poisoning.

The title of the movie isn’t yet known, but working options are thought to include ‘The Darkest Hour and Two Minutes’, ‘Gats, Lies and Videotape’, and ‘Silence of the Lamb; How to Pull the Wool Over World Rugby’s Eyes’.

Reaction to the decision in the republic has been joyous and unrestrained. To mark the occasion, Johannesburg smallgoods manufacturer Wet de Nobhaandle and Sons, has released a special edition biltong. Called ‘World Rugby’, it is designed to be easily chewed and spat out.

Meanwhile in an unforeseen outcome, Rugby Australia has been flooded with applications from young rugby players keen to make the switch into refereeing. “I want to be like Nic Berry,” read one application. “To train hard, reach the top level of the sport, travel the world, and be shat upon, well… it just doesn’t get any better than that, does it?”

“What the public doesn’t realise,” read another submission, “is that on-field refereeing is only a small part of the job, and is probably the least satisfying. I much prefer video analysis, say when a coach makes the effort to construct a 62-minute video to help me come to terms with my incompetence.

“Not all coaches have the respect for referees to actually do that, to selflessly advise and mentor referees, and helpfully, make it public, which is why I’d like to progress my career and one day, have the honour of refereeing a test match involving South Africa,” the letter concluded. 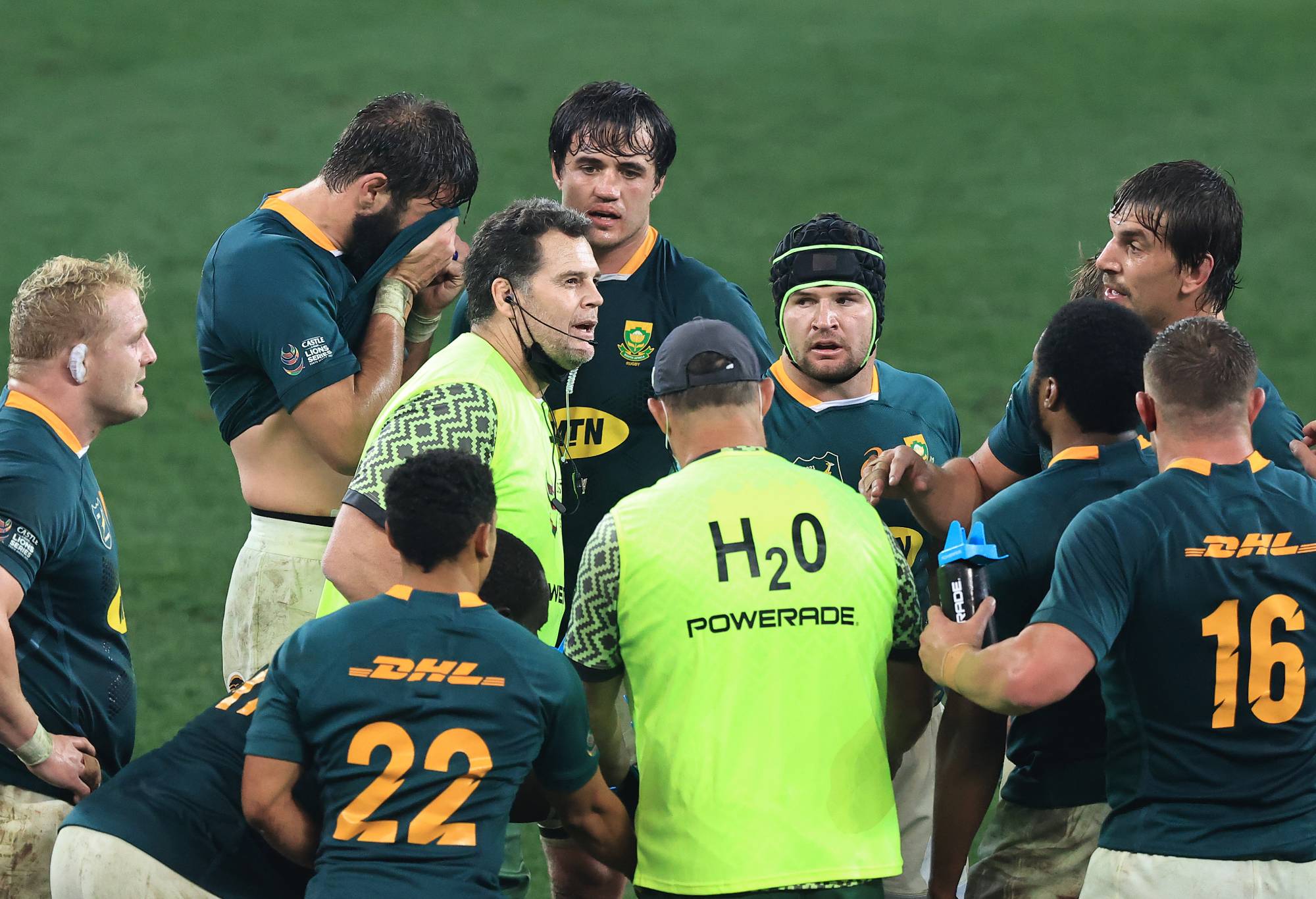 However, in a shock twist, the mayor of Berry, a picturesque town in southern New South Wales, announced the convening of a Special General Meeting of the local council, to vote on changing the name of the town from Berry to Erasmusville.

“We have to do something,” said the mayor. “People are ashamed at the association and are shit-scared that property values will go through the floor. The proposed name change should attract a lot of South African rugby fans to the town, and they’re just the kind of humble, fair-minded people, who always abide by the laws and accept the council’s decision, that we want in the district.”

Another positive to emerge from what could have been a problematic issue for rugby had it not been handled so deftly, is a raft of changes aimed at clarifying the confusion that currently exists around encroachment of support staff onto the field of play.

South African physio Rene Naylor has been appointed by World Rugby to a global coaching role, to educate other physios on how to set a defensive line when your side is under pressure, occupy space in the backfield, and how to rush on to tend to injured players who don’t even know they’re injured yet.

“Slowing the game down is an integral part of rugby nowadays,” said the World Rugby spokesperson. “There’s nobody better than Rene to teach others the finer points of fumbling with the tape, dropping the scissors, and seating a player down on the ground and asking them to slowly recite what they ate for breakfast that morning and the ten things they love most about Rassie.”

Lions coach Warren Gatland, a peripheral player in the original controversy, was asked for his view. “Originally I was prepared to be a witness but then I realised that it would be a waste of time. Nobody listens to me anyway, not the referees and certainly not my own team,” he said.

“I prepared that team perfectly,” he insisted. “We trained like champions, spinning the ball from everywhere. But that bastard Itoje obviously told the other players not to listen to me and did things his way. Well, the joke’s on him, he has to live with the shame of the series loss, and put up with Eddie for another two years.”

There are some who will try to paint this event as a dark chapter; a stain on rugby’s traditional values of fair play and accepting the referee’s decision as final.

To those dinosaurs, World Rugby says “jog on”; as much as it is possible for dinosaurs to jog.

Rassie Erasmus has played World Rugby for fools, getting his series win; all for the cost of apologising to a referee whose reputation he willingly trashed, and not being able to splash water around at a handful of matches he didn’t attend this season anyway.

He also has the satisfaction of knowing that his video is the catalyst for saving rugby. When fans in the future applaud yet another faultless refereeing performance, they will thank Rassie for making this happen.

World Rugby has played Erasmus too. “Rassie was reg” shout the headlines in the Afrikaans press. But so enveloped by the fog of victory and victimhood are he and his supporters, they cannot see the price that has been paid to achieve it; the loss of the respect of the rest of the rugby world.

You could almost say that Erasmus and World Rugby deserve each other.