Coach's Corner: Here's why the Wallabies have fallen off a cliff

Thanks to all who contributed a question at the call-out stage.

What do you think Rennie will do next season? Build on youth or look for old heads? I’ve a feeling he will be a bit unsure himself, the light shone in the window and then Scotland and England shut the blinds.
– Stillmissit.

I’d like to know why our backs seemed to play so deep. Is this to keep everyone onside when we kick? A lot of people are laying the blame on JOC, but is it really a coaching directive?
– Wooliej.

James O’Connor has copped a fair spray from many on his return to the 10 jersey. While, without a doubt, he has not been as influential as Quade Cooper, are there other factors that have had a greater impact on his performance at 10 than simply his ability (or lack thereof)? Should he/ will he be replaced at 10 for Wales?
– 2small2maul

So, let’s get to the heart of why Wallaby performances have dropped off a cliff on the end of year tour. The article on Wednesday contained a lot of the essential clues – Australia is simply not capable of keeping the ball for very long before giving it away, or losing it.
We can look at this from the perspective of ball-carrying. During the Rugby Championship, the four king-pins of Wallaby ball-carrying were Samu Kerevi at number 12, Marika Koroibete at number 11 and Bobby Valetini and Michael Hooper from the back-row. Here are the raw stats:

Now compare those figures with the stats in the end of year tour, from the players occupying the same positions:

It doesn’t take a mathematical genius to work out that the Wallabies are making only 55per cent of the carry-volume they achieved in the Rugby Championship, for only half of the yardage. That represents huge drop-off in production.

The malaise also spread to the bench. Two of Australia’s most reliable performers off the pine during the Rugby Championship were Angus Bell at loosehead prop and Pete Samu in the back-row. Together they produced an average of seven carries for 47 metres per game then. That has dropped to an average four runs for 16 metres on tour – half of the number of carries for one third of the total yardage.

When questions arise about the perceived failures of the European-based players – and most notably Will Skelton from the bench – it has to be understood within that frame of reference:

Has Skelton brought anything to the Wallabies that one of our other locks could not? Also, and probably far too early to tell, is Latu influential enough in his position to mitigate his occasionally dangerous tackling technique?
– Hazel Nutt

Can you explain why Dave Rennie leaves Skelton, Latu and Perese so, so late [off the bench]? It feels as if Dave Rennie does not trust his bench to do the job… This is pretty frustrating as it seems to becoming a common issue with the Rennie crew…
– Wallabies_Larkham

The answer to those questions is that neither Skelton, nor any other forward has had any opportunity to impress by carrying the ball. The most fundamental problem has been the failure to hold on to possession for any significant length of time, and give the Wallaby ball-carriers any chance to make their mark on the game.
This sequence at the very start of the England game set the tone for what followed:

Rob Leota wins a great ball at the tail of the lineout, and the Wallabies run a move around end featuring Nic White and Andrew Kellaway, with Rob Valetini as a decoy. By third phase the picture looks like this: 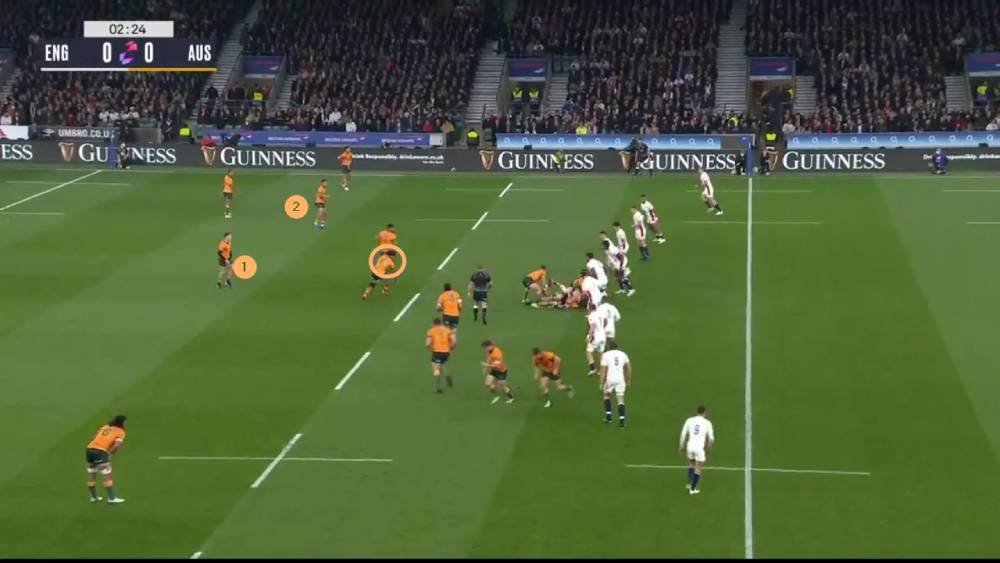 The options for Nic White have dried up. James O’Connor is standing directly behind the ruck, White has to pass 20 metres plus to reach Len Ikitau on the left, and the only serious ball-carrier (Valetini) is trying to duck out of the passing lane between 9 and 10. There is zero chance of Australia creating any stress on the England defence from this position via pass, run or kick.

When Australia did win a turnover deep within the England 22 straight from a kick-off, they did not have the patience or composure to keep the ball and put the England D under sustained pressure: 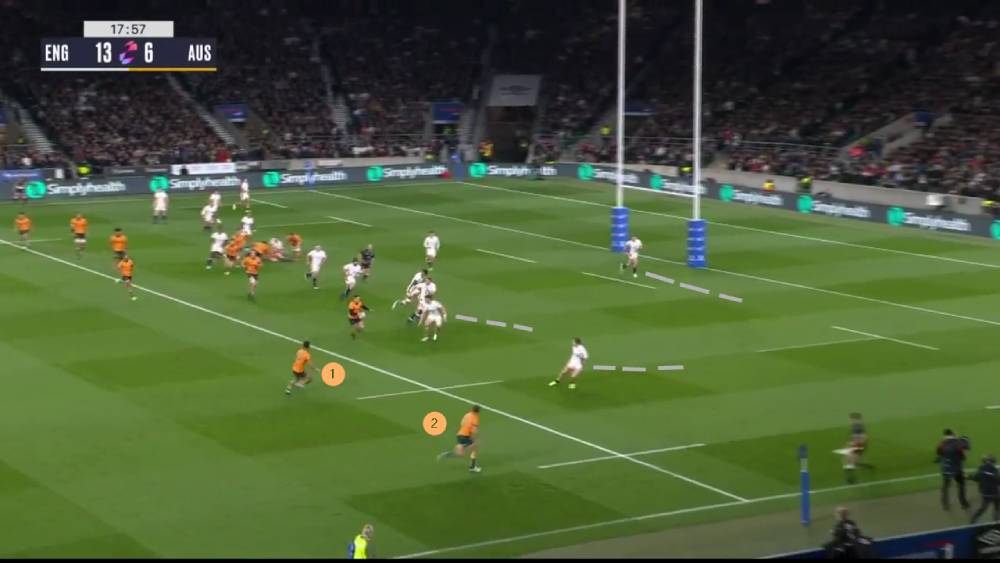 The chances of success on the kick are no more than 50/50 at best, but James O’Connor kicks prime possession away nonetheless. Why not keep the ball, get the forward runners like Bell, Valetini and Leota into the action, and squeeze England down to the pips instead?

Even when the Wallabies did succeed in using Valetini and Leota on the initial phases to good effect, they managed to give the ball away straight afterwards:

Both Valetini and Leota beat the first tackle with powerful bursts, but all of their good work is undone on the next phase with wasteful passing between O’Connor and Kurtley Beale. You cannot build pressure on the opponent by giving the ball straight back to them via an unforced error.

It was a theme echoed throughout the game. First, after a long break upfield by Hunter Paisami:

Second, after a strong run out of the Australian 22 by Tom Wright:

If you are going to pick big forward ball-carriers like Taniela Tupou, Tolu Latu, Angus Bell, Will Skelton, Bobby Valetini and Rob Leota, at least give them the opportunity to get their hands on the ball and make an impact. Have a little faith, and probe for weaknesses. Hit the 7+ phase mark, grind on the opposition and let them feel your power and resolution. Be Australian, and play the Australian Way.

If you can fit some of [the questions about New Zealand’s defence] in your pieces this week you will have an eager audience. I certainly couldn’t fault the willingness, and that was a big step up is some areas – never seen the AB front row make that many tackles. If the dysfunction doesn’t involve the role of the 8, I will be surprised.
– Highlander

Highlander’s excellent precis rightly drew a lot of interest from Kiwi supporters wanting to know just how deeply-rooted the potential issues for the All Blacks might be, in the build-up to the World Cup in France 2023.

The main issue was encapsulated by captain Sam Whitelock’s comments after the game:

“We went in at halftime in pretty good shape even though we’d absorbed a lot of pressure. It’s something for us to look at – how can we then apply pressure? In Test match rugby you can’t just absorb the whole time – you’ve got to apply pressure yourselves.”

That’s it in a nutshell. There are three basic ways to win Test matches: [1] by dominating physically at set-piece and breakdown, and using your defence and kicking game to suffocate the opponent (the Springbok way); [2] by controlling possession of the ball for long periods (the traditional Australian, and latterly the Irish way); [3] by giving the opponent the ball and looking for opportunities when he kicks it away or turns it over (the All Black way).

The problem for the All Blacks is that their defence can become too absorbent, because they want to keep so many defenders in the backfield to run those kicks and turnovers back with a clear view of the field: 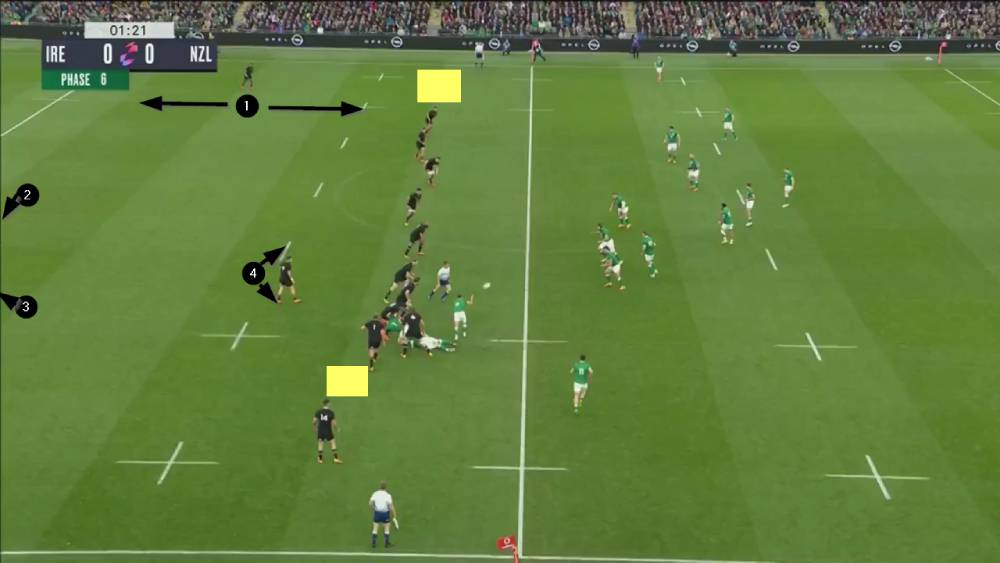 This is the picture just before the crisply-executed Ireland move I examined on Wednesday. Both Barrett brothers are already in the backfield out of shot, and Sevu Reece is playing ‘halves’ on the far side – hedging his bets, halfway in between the line and backfield. His basic aim is to join Jordie and Beaudy on a return, and he is giving up extra space on the edge if Ireland have the courage to move the ball wide by hand. They do.

The other soft element is TJ Perenara’s positioning behind the ruck. Most top European defences would spot him in the line with Reece, in the two yellow rectangles.
Here is a second example later in the first half: 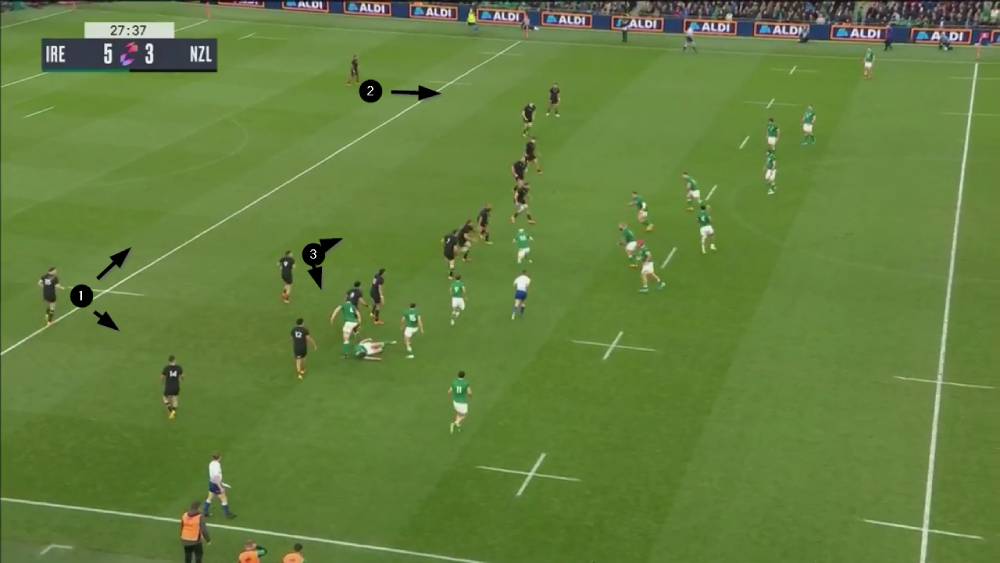 A Shaun Edwards-coached defence would feature 14 men in the line, with just the fullback on backfield duty anywhere inside their own 40m line. New Zealand still has Reece and Jordie back and T.J. playing in behind the line. It grants a confident ball-control team like Ireland bigger line-spacings to exploit in the middle, and more room on the edge of the field.

One of the most disappointing aspects of New Zealand’s play on attack is the lack of originality in their set-piece starters. These always used to be a pillar of strength in the Henry/Hansen/Smith golden era, when Kiwi patterns on phases 1-3 were always creative and usually lethal.

A few weeks, I published this article on RugbyPass illustrating how the All Blacks kept on using the same switch-back pattern from lineout versus the Springboks, with exactly the same outcome – a turnover. Against Ireland, they employed it from scrum, but the result was no different:

Anton Lienert-Brown makes a good carry on first phase, momentum decelerates with the run by Brodie Retallick on second, and it is plain as day Ireland know exactly where the ball will be going on third phase. It is the kind of predictability you never associate with New Zealand rugby at any level.

Be sure to look in again next week!