Erasmus is banned from any matchday activity until September 30 next year after being found guilty of misconduct by an independent committee for his hour-long video critique of the match officials during the British and Irish Lions series.

He had been masquerading as a waterboy for the Boks during the Lions series, coaching from the sidelines, and reprised the role for this month’s Test wins over Wales and Scotland.

Yet he will not be involved at Twickenham on Saturday after the verdict – which he has appealed – was handed down by World Rugby on Wednesday.

“It will be tough to be without him as his presence makes a huge difference to us,” Kolisi said at a news conference on Friday that started with SA Rugby saying they would not comment on the case or the sentence handed to Erasmus.

Kolisi, however, did respond to a question about having to do without Erasmus for Saturday’s Test. 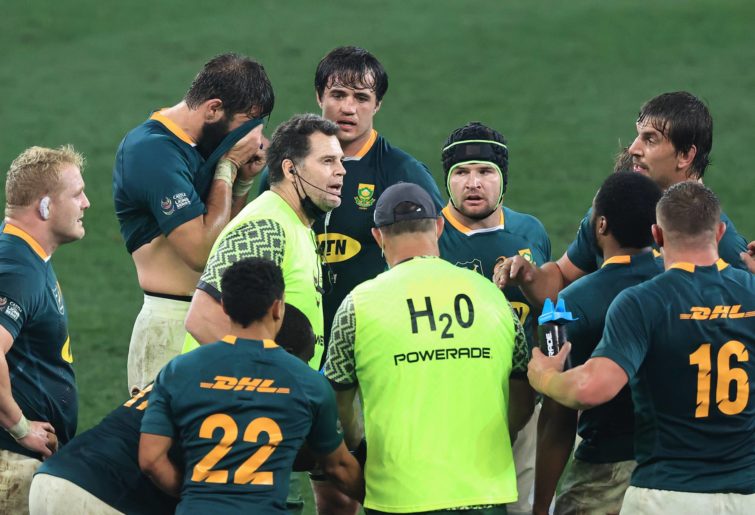 “His insight, the stuff that he sees that we don’t see on the field is important. It helps a lot when someone has played rugby at this level. He is always motivating us and talking to us from the side of the field and also when the substitutions are made,” the captain said.

“He makes a huge difference to us as a team and we’ll miss him. But I know the coaching staff have plans on how we can work around that as a group,” Kolisi added.

Though Jacques Nienaber is now coach of the side, taking over from Erasmus after South Africa won the 2019 World Cup, he has made no secret of the fact that Erasmus has a heavy input, from training to team selection.

Erasmus was unhappy with numerous decisions by Australian referee Nic Berry in the 22-17 first Test loss to the Lions in Cape Town in July, and further displeased when his efforts to engage with the official the following day were rebuffed. He made a 62-minute video critique that was posted online.

England are focusing on what will happen on the pitch, especially between the packs.

Forwards coach Richard Cockerill said: “Physically from a scrum, set-piece and line-out point of view, there isn’t a harder team to play against in the world.

“They have a very experienced pack that’s well drilled. Eighty-plus per cent of their lines-out are driven and they get a lot of success from that through penalties. It also enables them to march teams up the field.

“It’s very much the most physical test you’ll come across at Test level. Other teams are physical and fast, but play differently.”

England have lost hookers Jamie George and Luke Cowan-Dickie as well as prop Ellis Genge to a mixture of COVID-19 and injury and will start with 21-year-old prop Bevan Rodd – winning his second cap – and four-cap hooker Jamie Blamire.

On the bench will be Joe Marler, having just been released for COVID quarantine, during which time he says he has been running in a “chicken tun” at home, working in his home gym, and “tucking into a bottle of red a day”.

“I want to test myself against the best in the hottest environment,” he said, “and I’m really excited about it.”

The rugby world is getting into the spirit of the festive season with end of year parties, arguments between family members and ambitious plans for the year ahead. This also means there’s lots to talk about so let’s get stuck in.