'Is there any accountability?': Everything Rennie said as he savaged refs group over 'massive decisions'

Dave Rennie has made a point of keeping his powder dry when faced with perceived injustice from the refereeing group in the past. On Sunday he exploded with pent up frustration.

The mild mannered Kiwi described the efforts of referee Mike Adamson and TMO Marius Jonker as “horrendous” on the post-match TV interview after his team was edged 29-28 by Wales.

Rennie was fuming over two calls in particular – one to sin bin Kurtley Beale for a deliberate knock down and then later, to allow a try to Wales for a similar incident.

Australia also had Rob Valetini sent off after just 15 minutes.

Rennie was especially scathing of Jonker and revealed the Wallabies had been told that the TMO official mistakenly sent Allan Alaalatoa to the sin bin in the two point loss to Scotland a fortnight ago. 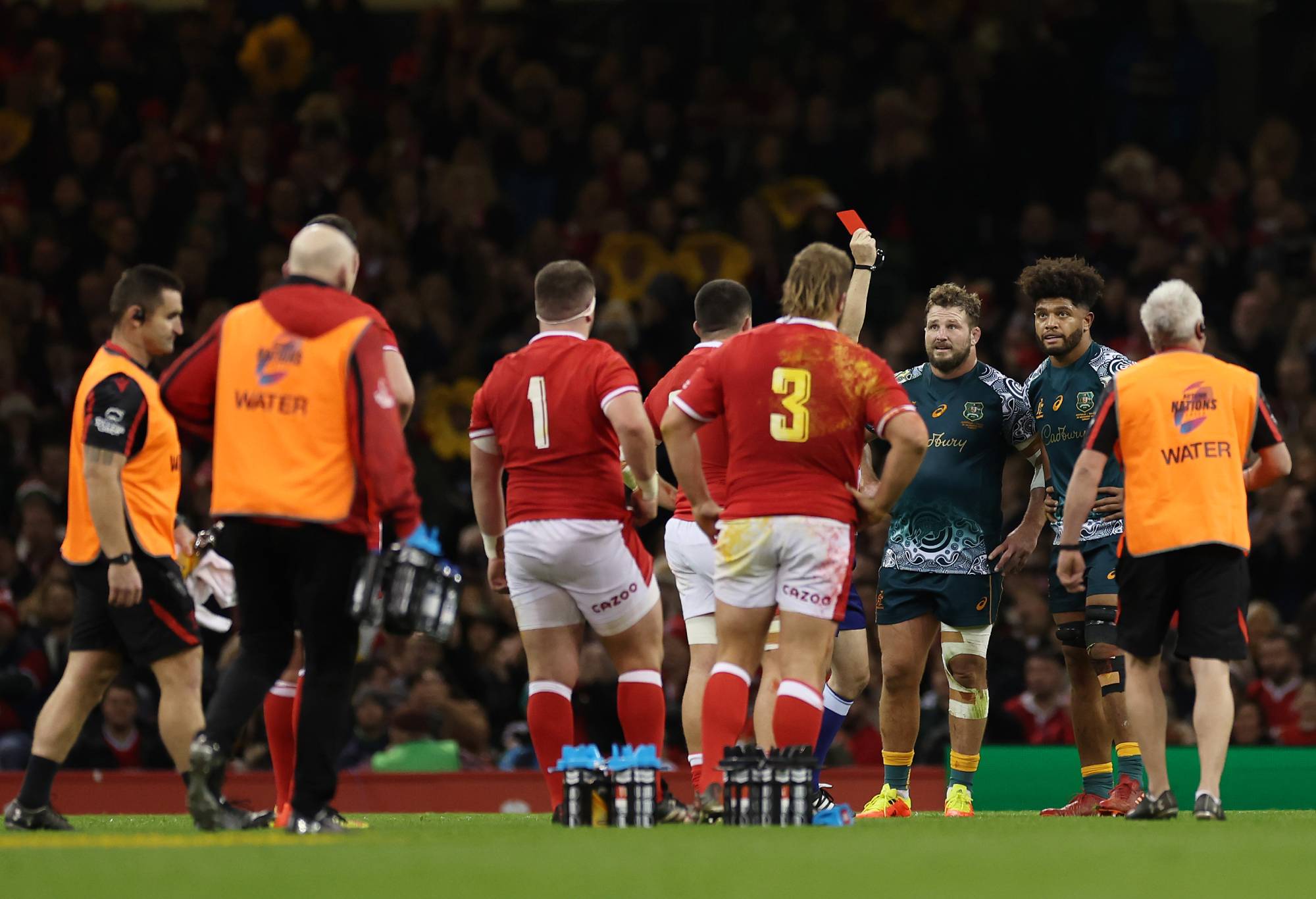 Here’s everything Rennie said after the loss

“I thought some of the decision making tonight by the officials was horrendous,” Rennie said on the TV coverage.

“It played a big part in the result. Kurtley Beale got sin binned for slapping the ball down. They did the same thing and it clearly goes forward and they get seven points out of it.

“Obviously really disappointed by the result. We’ll end up getting an apology next week no doubt but it won’t help the result.”

On why he decided to unleash on the officials

“I’ve made a decision to voice our disappointment immediately after the game,” Rennie said. “It’s not emotional. It’s not overreacting. But I thought it’s important that we stated our feelings.

“I make a real point not to criticise referees. We send reports in and seek a bit of clarity around things. We did that after the Scotland game, got a lot of apologies during the week and again that was a two point ball game and the same TMO that made a massive decision in that game as well.

“I just think our boys deserve better than that. That’s the reason why I spoke up after the game, it’s not going to help us to get apologies during the week, the game’s gone.

“I don’t have an issue with the red card because that’s the way it’s beeing refereed nowadays. You’ve got to take that on the chin.

“I wasn’t happy with Kurtley’s yellow card. He’s making an effort to wrap two arms, it clips his hand on the way through, they find a yellow card for that.

“Yet Nick Tompkins slashes the ball down in open play and somehow they say it didn’t go forward when he’s facing forward.

“They get seven points out of it instead of getting a yellow card and us geting a penalty. There were lots of decisions today I’m not going to go into but I felt they had a massive bearing on the game.

“Our boys played with a lot of courage and a lot of heart tonight and we were almost good enough to win that. But I’m incredibly disappointed with the officiating.”

On the possibility of facing sanctions for his criticism

Rennie said there was no doubt he could face sanctions for his comments, “but how do I support our team? By biting my lip again and us getting apologies during the week? It doesn’t change the result.

“I felt it was important that I spoke my mind. I’ve been a professional coach for over 20 years. I’ve never gone in the media and had a crack at a referee or the referee group. I felt I had to tonight.”

On the rising influence of the TMO and Jonker’s performance

“The reason the TMO was brought in was to get the right decision,” said Rennie.

“It’s going to slow the game down but you get to look at it and make the right decision.

“And I reflect back on Marius’ decision to sin bin Allan Alaalatoa against Scotland. During the week we were told it was the wrong decision, it wasn’t a yellow card.

“They’re big moments. Getting an apology during the week is not good enough. If we’re going to have TMO there’s no excuse for not getting the decision right. And we saw another example of that tonight.

“Everyone’s accountable, or they should be. Certainly we are and we want to make sure the officials are also accountable. Marius’ decision a couple of weeks ago, decided the game yet he was appointed again. Is there any accountability around guys making errors that are deciding Test matches?”

On Sunday’s effort, the European tour results and performances

“I’m incredibly proud of the effort – that was massive,” Rennie said of the gut wrenching defeat.

“We said we were going to empty out the tank for each other and when you’re two players too short, you’ve got to do that.

“We got put under the blowtorch and I thought the boys responded really well. So I’m really proud of the guys but I feel they deserved better.”

He said the team would “reflect back on three games that were winnable.

“So it’s frustrating. We’ve learned a lot. What we’ve highlighted, hopefully to everyone back at home, is a huge amount of courage and character in this group.

“We beat a French team with 14 players playing for 75 minutes. We’ve got a group of men who are prepared to fight for each other. We weren’t accurate enough in the first couple of weeks and finished second. We’ll take learnings out of this bit obviously very disappointed not to get to win on tour.”

“I thought we were a lot better with discipline tonight,” said Rennie, despite the red and yellow cards and decisive penalty near the end.

On injuries to Andrew Kellaway and Taniela Tupou

“Kels landed awkwardly – he knocked himself out so that was an automatic replacement,” said Rennie. “Taniela’s injury is a shin. We tried to put him out for five or 10 minutes in the second half and it was evident within a couple of minutes he was still struggling. ”

On the impact of the overseas players

“We really appreciate their input not just on the field on game day, but in all our meetings, reviews and training,” Rennie said.

“They’re good men, passionate Australians who want to be Wallabies. We appreciate the support of the board to bring a few guys back this year and they’ve enjoyed the culture. We’ll sit down with the board and review the Giteau Law and get an idea what it looks like at the end of this year.”