Scoring an A-League goal with the ABC’s wayward ball

I was completely hooked by Channel Ten’s free-to-air coverage of the Sydney derby last Saturday. For those fans viewing without encryption, it was a refreshing change from last season’s airing, on the home of conservative television, the ABC.

CommBank Stadium looked awesome under lights, as the Wanderers hosted Sydney FC, in what felt like a State of Origin match.

Such foresight was previously lost on the ABC. Instead, our public broadcaster allocated football matches to the “scones and jam” time slot of 5pm.

Perfect viewing after a nana nap.

Conversely, with its pumping musical stings and flashing icons, Network 10 clearly aimed for a younger demographic. Seeing each team’s proud emblem, reminded me of the English Premier League, especially during its inception.

Even the short 10 Play advertisements gave me chills. Rarely had I ever seen football related promos on a popular station before. It’s nice to know companies actually want to acknowledge us.

Last season, we were subjected to mundane ABC activists masking themselves as comedians, as repeats of old shows, such as Spicks and Specks, beamed on our screens.

Thank goodness things changed. When JD Sports, a partner of the Wanderers, flashed various western suburb locations on the electronic billboards, I felt a sense of geographical togetherness, mixed with tribal passion. Suddenly “Merrylands”, “ Guildford” and “Parramatta” were recognised on the main stage.

In 1993, radio host Wendy Harmer took part in an ABC debate, “that football is stupid”. Although her barbs were taken with a grain of salt, to me, they reinforced an idea that our public broadcaster had never taken sport seriously.

Tell that to the RBB. At the 80th minute of the derby, the Wanderers’ faithful turned their backs to the pitch, as they celebrated The Ponzan. Linking shoulders, they danced in unison, showing the rest of Australia that our beautiful game had matured into a formidable beast.

The banal shackles of the ABC are finally off. It’s going to be hard to stop the A-League’s ascension this time.

Pierre-Emerick Aubameyang will want that one back. Is it the frontrunner for Premier League miss of the season? 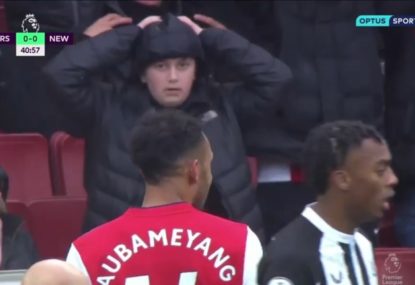 After conceding 17 goals in pre-season, assistant coach Mark Milligan quitting the club and Adam Federici retiring, Ante Milicic could have been forgiven for coming into this A-League Men season with a sense of trepidation.

Perth Glory will slowly build up star recruit Daniel Sturridge’s fitness as they settle into their A-League Men stint on the road.