After a somewhat defensively oriented first half, the chances began to flow in the second, as both sides sought to break the deadlock.

That endeavour was missing in the other derby unravelling at the same time in Sydney, with Western Sydney and Sydney FC both lacking the sense of freedom and risk in attack required to ignite a game of football that, like many, had become somewhat stodgy and conservative.

Thankfully for those who had ventured to GMHBA Stadium in Geelong, the second period of play in the southern derby did come to life.

A few 50/50 calls, some interesting A-League Men’s debuts and a 75th-minute goal saw Victory fans engage in the fight and eventually experience triumphant emotions that were rarely felt last season.

The goal was provided by the club’s new Portuguese central defender Roderick Jefferson Goncalves Miranda, a man rather beautifully known by the singular name Roderick in a football context.

If it wasn’t my favourite A-League Men’s name before the opening weekend of fixtures, it certainly is now. 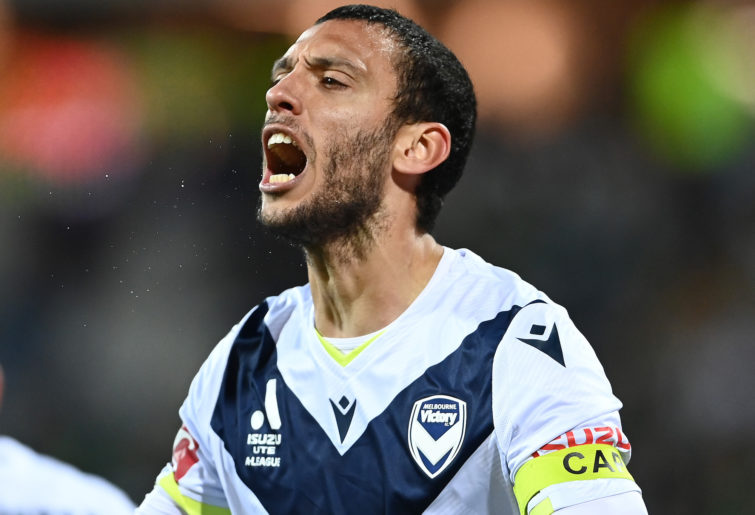 Jake Brimmer provided the ball to the near post and the physically imposing 30-year-old generated great power with his header, despite it being something of a glancing blow.

Veteran keeper Jamie Young was caught out, perhaps a step behind where he may have been a few seasons back.

It was not the sparkling performance any football fan hopes for from their team on a weekly basis, yet early in the season and after all the delays, interruptions and inconsistency of the last two years, it was a satisfying and deserved win.

Frankly, the result had new Victory manager Tony Popovic stamped all over it.

With all bar a couple of members of the starting XI being new to the club, the softly spoken Popovic went a long way towards wiping the painful memories of 2020-21 from the minds of supporters in just one match.

Not simply because Victory took the three points, more the way the team looked, played and competed.

Last season brought the rare site of Victory sitting at the foot of the ladder and their performances often reeking of disharmony, disinterest and questionable tactical approaches.

Within 45 minutes on Saturday, Popovic had the team holding its shape well, playing with a clear purpose, intent and style and showing no signs of frustration with each other.

Most Victory fans would have been grinning from ear to ear, feeling confident that one of the most proven managers in Australian football and one of the countries most respected Socceroos defenders with 58 international caps has a safe pair of hands with which to look after their club.

The players appeared connected in thought, selfless defensively in true Popovic style and bonded strongly, as evidenced by the goal celebration, which gave a clear impression that Melbourne Victory will be a united group this season.

In a nutshell, one of Australia’s most decorated teams looked to, once again, be as professional and organised as it had been throughout much of its history.

The manager has no doubt used some of the same strategies that saw him instantly turn the Wanderers into a consistent championship threat and challenge the dominance of Sydney FC with Perth Glory between 2018 and 2020.

Still the holy grail awaits him in Australia, yet the premiership plates and Asian Champions League trophy he has won say a lot about his qualities as a top-shelf manager.

The Victory board has certainly provided Popovic with the tools he will need to challenge Melbourne City and Sydney FC.

Yet to have sent his team onto the pitch in such a professional and organised manner in the opening round of fixtures is something of an achievement in itself.

Popovic is exactly what Melbourne Victory fans were hoping for after last season’s embarrassment and the team’s opening effort was exactly what they demand at such a successful club.

Anyone who had a chuckle at the Victory’s expense during their horror run will not be afforded such an opportunity this season.

Whether the team does become a serious contender for the title is debatable.

Yet with Popovic at the helm, fans can certainly be assured of him crafting a unified, aggressive and professional performance each week.

It is exactly what Tony Popovic does.