It all comes down to this. In the final edition of top 100 nicknames, we look at the legends of the game with the most legendary nicknames.

10. ‘The Flying Dutchman’
Paul ‘The Flying Dutchman’ Vander Haar was one of the most important players in the champion Essendon team of the 1980s which played in finals in eight of 11 years. This included grand final appearances in 1983-1985 and back-to-back premierships in 1984 and 1985.

Tall, good looking, flamboyant, a spectacular mark and brilliant, Vander Haar burst onto the scene in 1977 as recruit of the year.

9. ‘Super Boot’
One of a handful of players to have won a Brownlow Medal and a Coleman Medal. Bernie Quinlan was an inaugural inductee in the Australian Football Hall of Fame in 1996.

Renowned for his prodigious long kicking, which earned him the nickname ‘Superboot’, Quinlan played his best football late in his career, earning most of his individual accolades after he had turned 30.

He holds the record for the most career games without playing in a grand final and is one of only two VFL/AFL players (the other being Shaun Burgoyne) to have played 150 or more games at two separate clubs.

8. ‘Polly’
One of the game’s greats. As a ruckman during the 1950s and 1960s, Graham Farmer was unexcelled, with not even John Nicholls being capable of living with him when he was fully fit and focused. Moreover, with his innovative and incomparably effective use of handball – often over prodigious distances – Farmer almost single-handedly revolutionised the sport.

6. ‘Crazy Horse’
North Melbourne’s Gary Cowton won himself the nickname of ‘Crazy Horse’ because of his erratic turning.

5. ‘Silk’
A brilliant and durable footballer, Shaun Burgoyne was born in Darwin and was our greatest Indigenous footballer, serving both Port Adelaide and Hawthorn with distinction and winning premierships at both clubs. 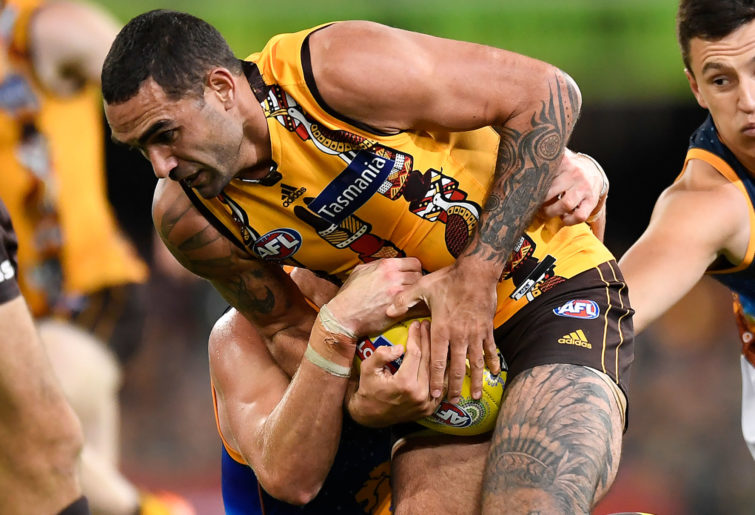 4. ‘The Big Ship’
His real success was as Australian Test cricket captain. Warwick ‘The Big Ship’ Armstrong played in 50 Tests for Australia, but during his time at South Melbourne, he was a member of the team that lost the 1899 grand final to Fitzroy.

3. ‘The Flying Doormat’
Shy and reserved, Bruce ‘The Flying Doormat’ Doull with sure hands, effortless disposal skills, safe marking, fierce tackling, and sublime anticipation won the admiration of all football followers in his 356 games for Carlton. One of the most popular footballers ever.

2. ‘Lethal’
The nickname says it all. He was lethal in front of goals but the squat, short legged and barrel chested man was fearless and bought fear to his opponents, on one occasion running into a point post and breaking it off. In a career of 332 games and 915 goals, Leigh ‘Lethal’ Matthews was possibly the greatest player of all time and almost certainly the greatest Hawthorn player of all time.

The nickname was derived from the Errol Flynn pirate movie popular at the time and suited Dyer down to the ground: both men were tough and ruthless with a touch of dare devil. One of Richmond’s all-time champions.