Cummins, the 47th Test skipper, sat alongside the 45th – Steve Smith. Smith’s return to the leadership top two after the sandpaper scandal cost him the top job will be as what Cummmins descrived as an “elevated vice-captain”. In other words he will help cover Cummins issues by being given freedom to change fields and make bowling changes.

Here’s everything Cummins and Smith said on Friday

“There’s a couple of more unknowns about having a bowling captain,” Cummins acknowledged. “And that’s why I think from the outset, I was absolutely determined if I was captain to have someone like Steve as vice-captain next to me.

“We’re so well planned these days with not only the players we have around us, but the staff, I feel like I’ve got quite a lot of experience to draw on. I think a lot of the problems or potential issues around being a fast bowling captain I’m sure we’ll be able to work through. So feeling overall excitement, as opposed to being too nervous about what might happen.

“I think one of the big reasons why there’s been talk around fast bowling captains in the past is just the workload issues.

“There’s going to be times where I’m out in the middle, it’s a hot day, I’m in the middle of a spell and I need to turn to people for advice for tactics, for experience and that’s the main reason, or one of the big reasons why I wanted Steve to be vice-captain.

“It potentially could look differently to how you’ve seen partnerships work in the past. There will be times in the field where I’ll throw to Steve, and you’ll see Steve moving fielders around, maybe doing bowling changes, taking a bit more of an elevated vice-captaincy role. That’s what I really want. 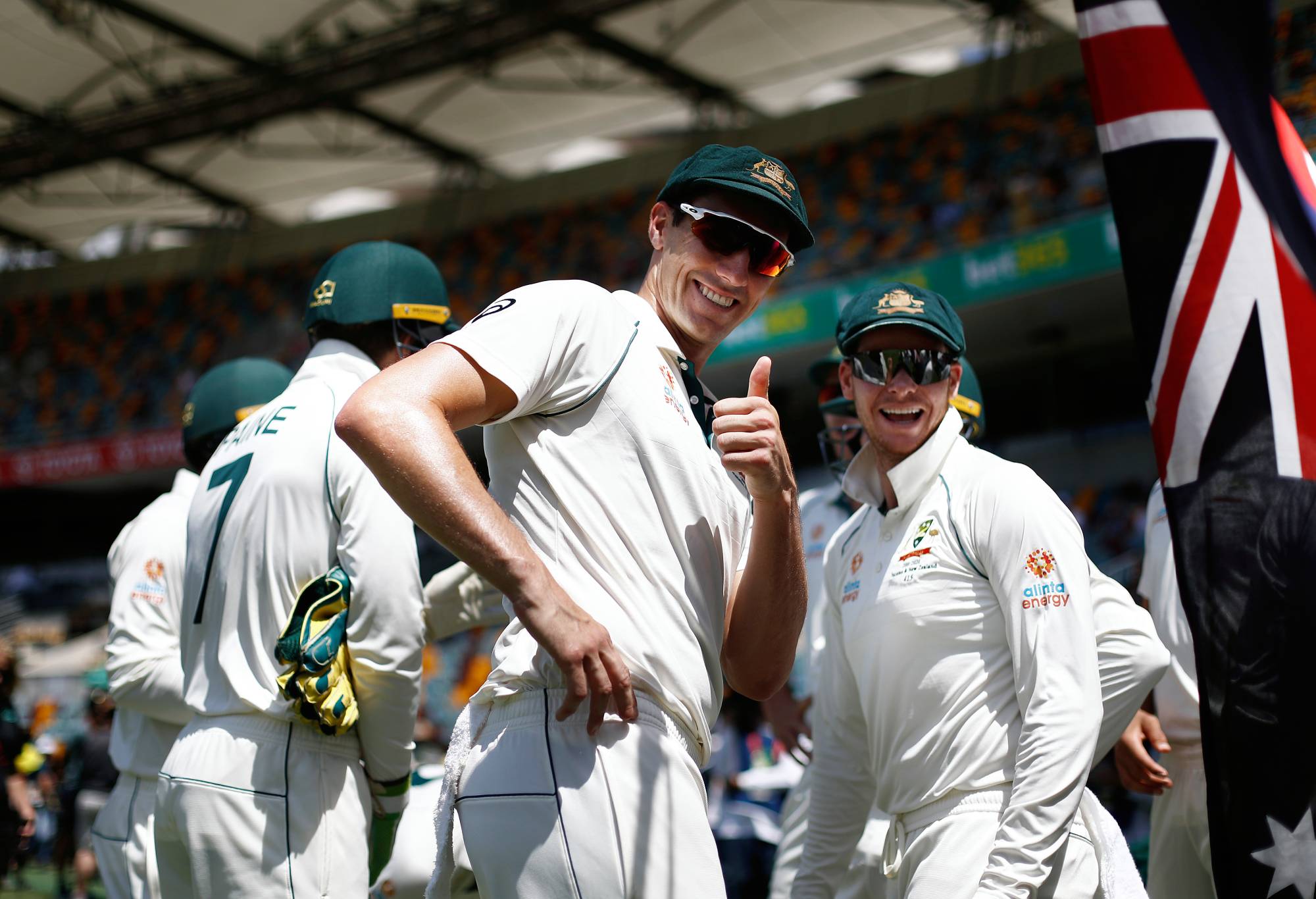 “That’s what I’ve asked for and I’m really glad that Steve’s happy with that as well. So we’ll nut out how exactly that works – but it’s going to be a real collaborative approach.

“Steve’s got such huge strengths, especially around tactically out in the field, he sees it differently from first slip, huge experience, working spinners, bowling changes, mapping out a game, so I’ll be leaning on him hugely for that.

“And yeah, my might look a little bit different from the outside to potentially other captains in the past. And that’s great.”

Smith said: “It’s my job to help Patrick in any way that I can.

“If there are times on the field when I can help the workload with Pat, then that’s my job. I’m excited to be working with Patrick, we’ve known each other a long time, we’re close friends, we get on really well. And I think we complement each other really well.

“This could be a really great partnership.”

Smith on the new role having previously been captain

Smith said he was “truly honoured” to stand beside Cummins.

“There will be some negativity from some people around it, I understand that and I get that. But I’ve grown a great deal over the last three or four years, I’m a more rounded individual.

“In turn, I think it’s turned me into a better leader and I’m excited to be in this position next to Patrick.

“I think he’s done a terrific job over the last few years as vice-captain and grown into a terrific leader and I look forward to doing everything that I can in my power to help Patrick and help this team grow into a successful one both on and off the field.”

On Paine and the issues he’s going through

Paine stood down from cricket indefinitely on Friday for a ‘mental health’ break in the wake of his lewd text scandal.

Cummins said he had been inregular contact with his former captain.

“I’ve been chatting with Tim the whole week,” said Cummins. “I spoke to him this morning. We really feel for Tim and his family. He’s just a really loved, well respected leader for our team.

“He’s been incredible for me. Now, especially since being vice-captain, he’s been someone who’s really looked after me and who I’ve learned a lot off.

“That’s consistent with all the boys and the staff up here, we just really feel for Tim and what he’s going through. We love him.

“We hope that we see him back in the team soon and wish him all the best. He’s obviously gone through a tough time. Outside of that, everyone else is in a really good place, really relaxed, really confident going to an Ashes series. It’s only 10 days ago since we won a World Cup so the overall mood, outside of feeling for Tim is one of real excitement and positivity.”

On the potential of Paine’s return to the team

“It’s probably too early to speculate on that,” said Cummins. “He’s thinking a couple days at a time at the moment. So we’ll give him as much time as needed.

“We would absolutely welcome him back into the team. But at the moment, that’s obviously not front and centre for him.”

Smith added: “Having been through some tough times myself, I urge him to take care of himself and be really kind to himself. My thoughts are with, with him and his family. And obviously, he’s taken a leave of absence but hopefully, we can see him back soon.”

Cummins was asked about the high levels of moral character expected from an Australian skipper and if it was healthy.

“When it comes to the kind of moral character, I’m probably my own harshest critic and judge on that, ” Cummins said.

“I know with the role comes added scrutiny. But for 10 or 11 years I’ve been playing for Australia in the public eye and I won’t always get things right, I’m certainly not perfect. There are going to be things that pop up. But as long as I can sleep at night, I’m really comfortable with the responsibility of that.”

Cummins has a reputation for being ‘squeaky clean’, but he finds descriptions of his purity make him uncomfortable.

“That’s probably really hit home in the last few days seeing Tim,” said Cummins. “I think a lot of the pressure and the responsibility of being perfect is unreasonable. I think it’s too much ask of anyone.

“And I think you’ve got to have permission to grow. We’re going to have players come into our side who are just teenagers, just out of school, who are growing up, they’ve got to be able to fail and know that they’re allowed to grow from that.

“I think that sends a bad message that everyone’s perfect, that someone’s got no flaws. I’m certainly going to be standing up for players if they make some minor mistakes.

“They’re opportunities to grow from. It’s not always ideal, but they happen. We’ve got to manage our expectations of of everyone a little bit more. I think we’ve got to be a bit kinder and a bit more understanding at times.”

He said it had been tough to watch the travails of Paine and Smith from close quarters.

“It’s really hit home, the added scrutiny of being captain,” said Cummins. “It’s a reminder of how many Australians love cricket. And we have really high expectations.

“Some parts of it are daunting but you can’t stay in bed all day worrying about some of these things. I’m concentrating on the fact there’s so much positive with this role and so much I think I could bring to it. I’m trying to not overthink it and just try to be me. I’m not going to be anyone different. I’m going to be myself. And hopefully, that’s enough.”

On his style of captaincy

“I’ll try to play to my strengths,” Cummins said. “I’m naturally quite a calm person. I’m quite positive. I really love people. I’m a real people person. So I’m going to look to be really collaborative.

“We’ve got a great stable of senior players in the side, great staff. So I’ll be leaning on everyone. I’m a big one for empowering individuals to really own their role and take control of that. So you won’t see me telling someone how to bat or someone how to bowl.

“I’m there to protect their freedom. I want to back them in, try to remove distractions, relieve pressure off them. And tactically, drawing on a decade of of international cricket, especially from the bowling side of things, I feel like I can bring a lot to that role.”

On resting from Tests

“I very much doubt if I’ll rest from Test cricket,” Cummins said. “I’ve never rested from a game of Test cricket before and I doubt that will start now. In terms of other formats, we’ll cross that bridge when we have to, just like any other time my career, where there’s been certain series that we’ve identified as good opportunities to rest and get re-energized for the big series.

“I’m pretty open to whatever needs to happen but I’m really campaign focussed. It’s probably how I think about my bowling as much as anything else. So we’re going to put everything into these next six weeks, these five Test matches and go from there.”

He was asked if he harboured ambition to lead the white-ball teams.

“It’s probably too early to say mainly because I will start this role and then I’ll see where we go,” Cummins said.

“But my gut feeling and probably my preference at the moment, based on nothing, is to have separate captains.

“I think it’s too much to ask, certainly of me. I’d love to just concentrate on Test cricket and Aaron’s doing a fantastic job. At the moment, I’m purely focused on Test cricket.”

On knowing when not to bowl himself

“I think that’s going to be one of the main things I’ll have to be aware of,” Cummins agreed. “And that’s why I’ll be leaning on people like Steven, plenty of senior guys around.

“I’m not out there by myself. There’s plenty of people to lean on. You know, David Warner’s there, Nathan Lyon, Starcy, Josh Hazlewood. Sometimes I might need to listen to what they’ve got to say more than what I’ve got to say myself.”

“We’ve been pretty deliberate here in quarantine to make sure we remember that we won a World Cup 10 days ago,” Cummins laughed.

“Mitchy Marsh tries to keep everyone reminded of that when he calls himself Norm Smith and wears his medal around.

“We’re in such a great place now. Winning a World Cup – we’re the best T20 side in the world – that’s that’s a pretty awesome way to start a summer.

“In terms of the personnel that we have for the Test series, barring Painey there’s no injuries. Everyone’s fit, the guys that were in the World Cup are riding high on confidence and we’re having some really good prep up here.

“And then everyone else that’s coming in, has just been churning out runs and wickets in Shield cricket. We’ve got a whole stable of really confident, exciting players that can step in.”