While the Autumn Series featured some superb contests and cliff hanger results, a common theme was the state of the refereeing, with Dave Rennie among the most vocal after his team’s loss to Wales in their final match of 2021.

Along the way we saw the ever-increasing creep of TMO on the action, with the on field referees being constantly interrupted by the voice of the TV officials, trawling through the game’s minutiae.

Of course the TMO is not brand new, but the level of disenchanment with its influence seems to grow every year.

Jones has just released a new book called ‘Leadership: Lessons from my life in rugby’ and of course covers plenty of ground, including the state of officiating and reflections on banned South African Director of Rugby Rassie Erasmus as well as the emd of his time with Australia.

Spoiler alert – if you are saving up this read for Christmas, we’re going to share quite a few of Eddie’s thoughts here after great swathes of his tome were shared in UK papers during the last week.

Eddie’s thoughts on the TMO

“One of the problems affecting the game is that we’re trying to make it into a science,” Jones writes.

“But it’s not a science. We are handing the game over to technology. Rather than relying on common sense, we’re turning to the TMO and video technology incessantly. We should limit the use of the TMO to crucial decisions — which are tries. Let the referee decide on everything else. But there is indifferent leadership in world rugby officiating.

“It means that our game is becoming like American football. We had 80-minute games of rugby in the Lions series stretching across almost two hours. It’s ridiculous. We need to give more power back to the referee and we need to help him. For this reason we held back in our criticism of the officials after the Wales game.” 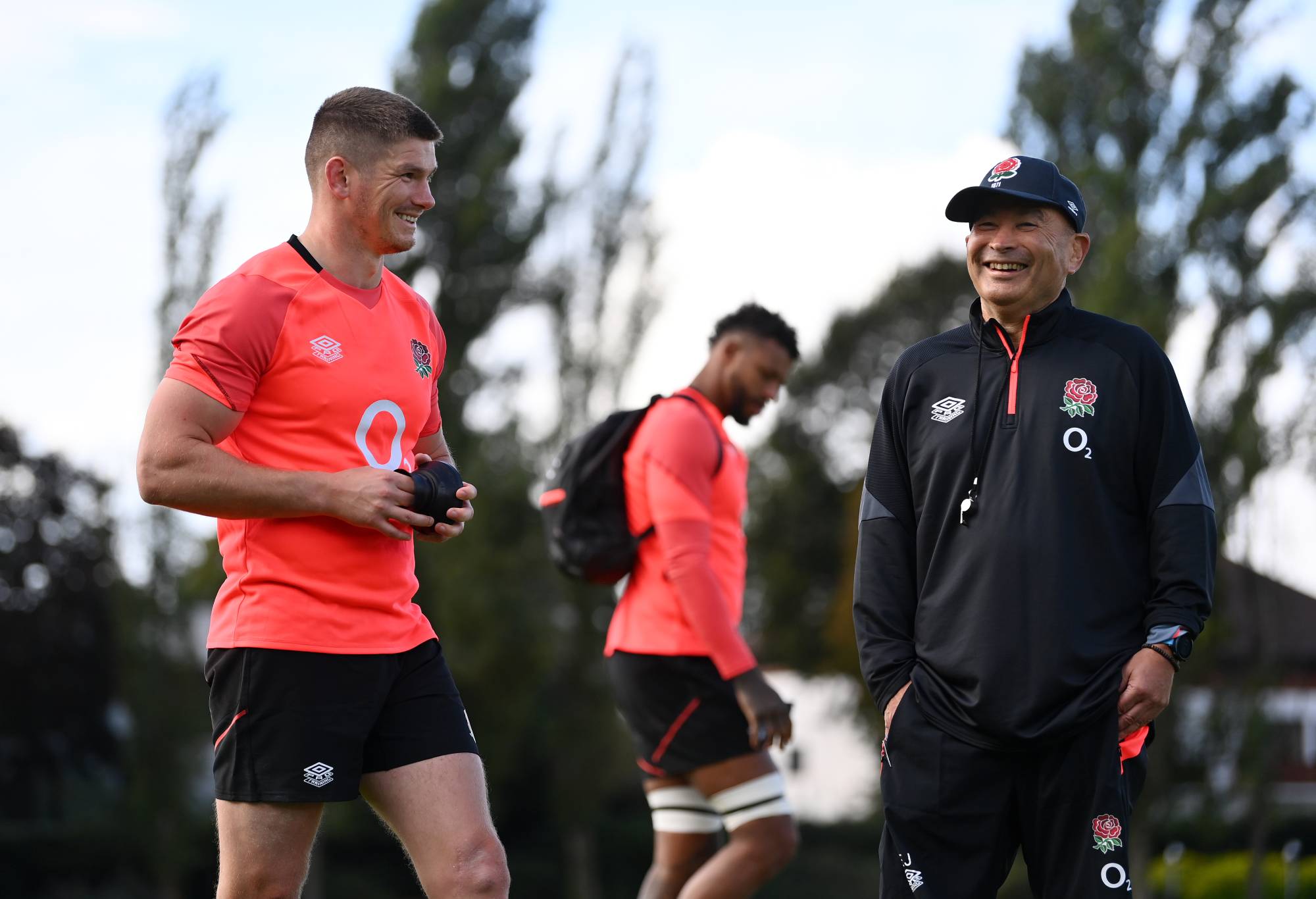 Jones expanded on that, saying he could have made a Rassie Erasmus-style video after England’s 40-24 Six Nations defeat by Wales in February but thought pushing the issue could cause long term damage to the sport.

“I could have made a long video of complaint like Rassie Erasmus did,” Jones wrote. He felt Wales’ first two tries were illegitmate.

“In terms of leadership all international coaches could emulate Rassie’s stunt, but would that benefit the game? We would put more pressure on the officials and, as we saw, the refereeing got worse as the Lions series went on, to the benefit of South Africa.

“Rassie might feel his tactics were justified but you need to take a wider view for the sake of rugby. If I had gone down the Rassie Erasmus route we would have got so much more leeway from referees in the next couple of games because they would have felt under extreme pressure. But that’s not how I want the game to be run.”

Eddie went into detail about his motivational work at the 2019 World Cup, and acknowledged several of his players looked at him as if he was nuts as he talked to them in the lead up to beating New Zealand.

“People might expect that, before we beat the All Blacks, I would have made a defining, tub-thumping speech of leadership to inspire an exceptional performance,” he wrote.

“I was, instead, pretty low-key and measured that evening. But, three days earlier, on the Wednesday, I felt we weren’t quite there in training. We weren’t sharp enough for the All Blacks. So I did something different that evening.

“I brought a samurai sword into the team room. It was impressive and authentic and I had spent a fair amount of money on it from an antique shop in Tokyo. I also brought in some kiwi fruit. You could say it was cheesy, rather than fruity, but I used the samurai sword to scythe them in two. The blade was so sharp that the kiwi fruits split apart in an instant.

“The players were laughing but a few of them shot me a look as if to say, ‘S—, this guy is nuts.’ I still walked around the room with the samurai sword and made them all feel the deadly blade.”

Jones said the incident helped the group come up with their decision on how to face down the haka.

“From there we developed the idea of facing down the haka in a V formation with Owen Farrell at the head of it,” Jones wrote.

“We also had a very rigorous meeting with the players’ leadership group the next morning and I pointed out some of the minor problems. The players addressed them and got it right. We won the game.

“If we had lost, people would have been entitled to say: ‘How stupid was all that stuff with the samurai sword?’ But it makes a good story and we can say we brought out the sword and a small tray of kiwi fruit before one of England’s most famous victories.”

Of course, England lost the final to South Africa and Jones was left feeling the same as he had in 2003 when his Wallabies team was beaten by England in the final in Sydney.

“We flew from Tokyo to London after defeat in the 2019 World Cup final and, while I said most of the right things, and tried to shrug and smile when asked how I felt, I was bereft,” wrote Jones.

“I felt just as empty as I had done 16 years earlier when I had coached Australia to the World Cup final in Sydney – losing in extra time to England and that Jonny Wilkinson drop goal.

“I had made the mistake of staying on as the Wallabies’ head coach because I thought I could set a new vision and start a new cycle of success. The vision made sense but I made too many mistakes over the next two years. It was partly down to sheer fatigue. I was burnt out by the job. Even before I was sacked in 2005, I knew it would have been better for both Australian rugby and myself if we had made a clean break after the final.”

Jones said Smith first came onto his radar in 2015 but they had a proper cacth up last year for the first time.

“When the first lockdown hit in 2020, I called him so we could have a proper conversation,” wrote Jones.

“I’ve had my eye on him for a while because I think he’s got real potential. But I was not sure whether Marcus had the desire to be the best he can be. I wondered if he might be happy being a nice Harlequins player, talking about England in glowing terms, without really testing the limits of his ability or character.

“I had thought this for over a year when I rang him up in April 2020. We had a reasonably blunt conversation about the state of his game. I suggested that he needed to come up with his own identity. I wanted him to outline that identity as a player on a piece of paper for me. He did that and sent it over to me. We’ve been continuing that conversation ever since. 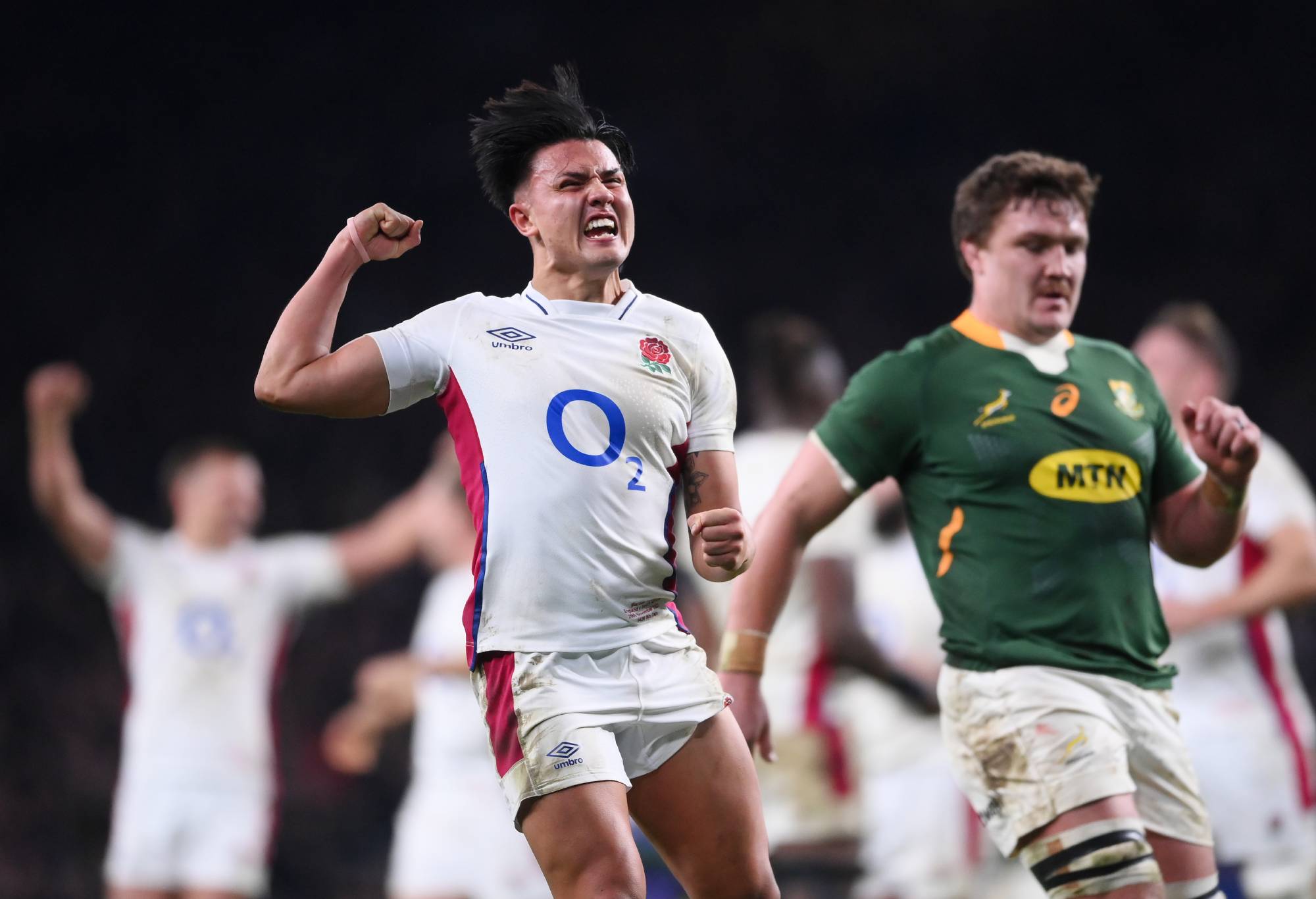 “He had identified the strengths he had first shown as a schoolboy. How could he utilise those strengths again at elite level? What is his role in the team? What did he need to do, especially as a number 10, to develop? Those were the three areas we tried to explore. I asked him to fill in those answers and I gave him a little feedback.”

Jones had some interesting thoughts on the maturation process of an eliite No. 10.

“Marcus is probably only going to be at his best in his late twenties,” he wrote.

“So we need to help him along this emotional journey and remind him about the journeys taken by some other great number 10s. When was Dan Carter at his best? At his last World Cup in 2015. Is Beauden Barrett a fully mature 10? No. He is a great player, but the best is still to come for him. Number 10s are like quarterbacks. You’ve got to allow them to fail. You’ve got to give them time to mature. The good ones come through. They repay you. They might have two or three years at their very best. But it is a demanding position.”

So much, Jones says, will depend on how Smith handles the fame game.

“He’s going to be a pin-up boy because that suits the English media mentality,” Jones wrote.

“They like the fact he’s slightly different and seen as an X factor type of player. It’s easy to be seduced, but Marcus is from a good family and he’s got a good manner. He just needs to keep working to get the best out of himself.”

“When Maro Itoje burst onto the scene you could have come from Mars and still been able to tell that he was going to be a special player,” wrote Jones. “You didn’t need any deep rugby knowledge or foresight to predict an outstanding career for him if he stayed on track.

“But these are also the standout players that you have to manage carefully at the outset.”

Jones said Itoje, “needed, more than anyone else, to understand the value of patience. He needed to trust us.”

“There were lots of calls for him to be named as captain of the British and Irish Lions in South Africa in 2021. Alun Wyn Jones rightly got the job instead. That seemed sensible to me. I might be wrong, but I am not sure Maro is a future England captain. He is going to be one of the great players, but Maro is very inward looking,” Jones explained.

“We’ve sent Maro to acting classes, which is having a beneficial effect. He speaks more influentially now, and I am hopeful he can develop more communication and leadership skills. Acting brings Maro out of himself.

“We don’t want to quench his inner drive, but we will have made huge progress if we can tap into it in different ways so that it transmits to his teammates. The acting classes are a practical step to helping Maro and others share that internal fire and magic which makes them special. We’re always looking to see if we can develop these traits and find the right mix of leaders.”

'My vision for England – inspired by Japanese billionaire behind Uniqlo'

In extracts from his new book, Eddie Jones reveals plan to be the greatest side in rugby history – and how a samurai sword and kiwi fruit helped beat the All Blacks