From where they were just a couple of years ago, the Knicks’ turnaround has been a stunning success.

They should be happy they’ve been able to stop being a laughing stock to finish fourth in the Eastern Conference last season and be on course for another crack at the playoffs in 2021-22.

But will they be patient?

Plus they hired the right coach last year in Tom Thibodeau, whose work ethic and attention to detail is legendary – several teams who bypassed the chance to sign him after he left Minnesota should be kicking themselves now.

The Knicks should be satisfied with their progress and in no rush to pull the trigger on a big free agent deal.

Of course, the question was asked after game one of the season in the viral Bing Bong video by a random fan, pondering whether Kevin Durant wishes he came to the Kniiiiiiiicks?

Perhaps he does after the Kyrie Irving dramas have left Brooklyn operating at less than full capacity but he still has James Harden riding sidesaddle, his Nets are atop the Eastern Conference and he is not the kind of person to ever admit to any second thoughts.

Unlike a few years ago when KD and Kyrie were looking for a joint landing spot in a big market and chose the upstart Nets over the Madison Square Garden basket case franchise, the Knicks are now on solid footing.

Despised owner James Dolan has been uncharacteristically relatively free of controversy in the past couple of years and the new regime headed by Leon Rose and William Wesley has been able to restore the Knicks’ reputation to a point where they will be a chance of landing the next big fish in free agency.

But they shouldn’t do it if it means giving up one or more of their young guns.

Randle is coming off one of the biggest single-season leaps in NBA history and although he came up short in the playoffs when the Knicks were upset by Atlanta, they should stick by him.

Barrett, the No.3 pick in the 2019 Draft behind blue chip prospects Zion Williamson and Ja Morant, still needs to improve his shooting but jettisoning him for a more-established star would be short-sighted.

It’s fair to say the Knicks have no regrets about packaging Kristaps Porzingis to Dallas for picks a few years ago when he was at a similar stage of his career but Barrett does not have the off-court baggage and injury history of the Lithuanian. 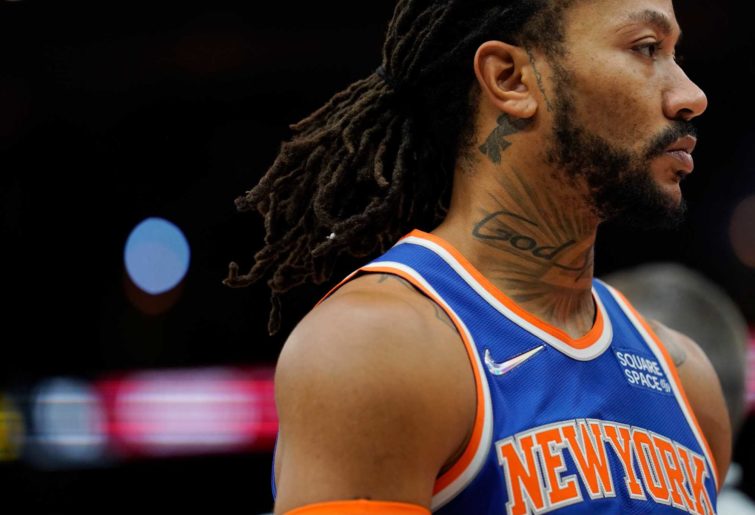 There’s also the likes of Ben Simmons, Damian Lillard, De’Aaron Fox and Karl-Anthony Towns who could be acquired in a trade.

Knicks fans also have pictures of Giannis Antetokounmpo and Zion Williamson in their hope chest but they shouldn’t fall into the trap of banking on those two stars being part of their future like they’ve done with Durant, LeBron James, Irving, Gordon Hayward and many more over the years.

Giannis last year re-signed for five more seasons at Milwaukee and despite recent cryptic comments about not necessarily being there forever, a lot would have to go wrong after last season’s title for him to leave.

And Zion is only just getting back on the floor for his third season after an injury-riddled first two years – there is talk he may opt out of his New Orleans deal and forfeit many millions by not extending his rookie deal.

That won’t happen – the Pelicans will fire whichever staff or change the roster however he wants it before they let that happen.

The Knicks meanwhile can clear cap room next season to chase a big name but they shouldn’t trade away their best young assets to get one like they did when they grabbed Carmelo Anthony from Denver because they were too nervous to wait for free agency.

They need to stay the course and keep building like a small-market team, a legacy from the past decade when their ongoing incompetence off the court.

Aussie in the Big Show
Patty Mills is in career-best shooting form – he is averaging 1.33 points per shot to be the most efficient jump shooter in the NBA, according to ESPN stats guru Kirk Goldsberry.

This puts him ahead of Milwaukee three-point specialist Grayson Allen, the real Splash brothers – Steph and Seth Curry, and the reborn Carmelo Anthony.

Keep your eyes on
The Bucks are back. Not that there was ever any alarm about the champions but they’ve gone 8-2 over the past couple of weeks and are back up to fifth in the Eastern Conference, only two games back from first-placed Brooklyn.

The Lake Show. There’s already rumblings about Frank Vogel’s tenure as Lakers coach – he shouldn’t be the scapegoat for the pathetic squad make-up surrounding LeBron James and Anthony Davis but with the team running eighth in the Western Conference with a 10-11 record, the 2020 championship winner needs to get the team firing soon or speculation will only increase.

Must-watch matches this week
Monday – Pistons at Lakers, 1.30pm AEST
Lakers fans didn’t have to wait long to “welcome” Pistons big bopper Isaiah Stewart after last week’s brouhaha with LeBron James. “Beef Stew” will cop it in LaLa Land but it will be interesting to see if the King will grant him a royal pardon when they come across each other on court.

Tuesday – Hornets at Bulls, 12pm AEST
Balls will be on the line in this one when Lonzo hosts LaMelo in the Windy City. Chicago have been big improvers this season with Lonzo helping rectify their defence while LaMelo has helped the slow-starting Charlotte side surge up the standings in recent weeks.

Wednesday – Knicks at Nets, 11.30am AEST
The Big Apple will always be a Knicks town and even though Brooklyn are riding high at the top of the Eastern Conference, they may not necessarily have the most fans in the Barclays Center when these teams meet.

Thursday – 76ers at Celtics, 11.30am AEST
Joel Embiid is back in the Philadelphia line-up after his COVID-19 case so expect the Sixers to climb back up the standings and they’d love nothing more than to throw a spanner into the works of Boston’s recent revival.

Friday – Bulls at Knicks, 11.30am AEST
All the good action is in the east this week and with the playing style going back in some ways to ‘90s ball this season it’s only fitting that Chicago v New York at MSG is given prime time status.