Legendary fight broadcaster Larry Merchant once called boxing ‘the theatre of the unexpected,’ and it proved to be just that as Kambosos fought the fight of his life to capture the IBF, WBA, WBC Franchise, WBO and Ring Magazine world titles at Madison Square Garden last Sunday.
Few had given him a chance. Lopez was a pound-for-pound talent, a murderous puncher, and a heavily backed favourite. Kambosos didn’t care. This had been his dream and his self-belief had never wavered.

Flash back to November 2016 and Kambosos was just another fighter unknown to all but the most hardcore of fight fans. But even back then, as a brash 23-year-old, the Sydneysider had his eyes on bigger things.

“I want to show that Australia does have an elite fighter,” Kambosos said.

“I want to be at the top, I want to have all the belts.

“At 23 years old, I have a world rating and I’m probably the most talked about fighter in Australia already.

“You put one thing up (online) and it explodes, you get a lot of people that hate but at the end of the day that motivates me.

“The more they talk, the harder I train. The end goal is the belts and unifying all of them.”

A month later I met Kambosos for the first time as he took on Brandon Ogilvie at Sydney’s Luna Park. A relative novice with a record of 10-0, I recall the air of confidence that surrounded him. Such self-esteem had been enough for certain sections of the boxing community to label him arrogant, but I never felt that.

Instead, I saw a fighter with a steely resolve. One bold enough to dream big and mature enough to put in the hard work and sacrifice to get there.

Ogilvie was the first real step up in class Kambosos had faced in his short career at that point and he passed with flying colours winning a 12 round points decision.

From that point on, I remember discussions over text message with Kambosos. The majority of them centred on a desire to mark his mark overseas. His skillset had evolved beyond the level of opposition Australia could offer.

A fight on Joseph Parker’s undercard at the Vodafone Events Centre in Manukau City, New Zealand followed and for the second successive time, Kambosos dismantled a quality fighter in Qamil Balla.

For many outside of Australian boxing circles this was the first time witnessing the Sydneysider in action. He didn’t disappoint, putting on the performance of the night before claiming to be the most disciplined fighter in the world. A claim he has repeated many times since then.

“I’m the most disciplined fighter, I believe, in the world,” Kambosos declared in his post fight interview.

“I’m the hungriest fighter in the world.

“I stay focused no matter what I do.

The platform had been laid. The dedication to honing his craft was his sole desire and one that would lead him to the Philippines as chief sparring partner for the great Manny Pacquiao.

Over the course of a three-year period, Kambosos spent some 250 rounds sparring with Pacquiao. Running the hills of General Santos City with an eight-division world champion is a far cry from fighting in local club shows in Sydney and Pacquiao saw enough in Kambosos to label him a future world champion but the step up he craved was yet to present itself.

That step up that Kambosos had searched for finally happened when he faced off with former IBF lightweight world champion Mickey Bey in December of 2019 at the iconic Madison Square Garden.

In an interview with George prior to the bout, I could feel his frustration at having such trouble landing a step up fight but also an excitement that perhaps he was finally on the world stage.

“When I first got to Miami there wasn’t an opponent locked in,” he said.

“I was fighting on the (Crawford) card in a ten round bout but no opponent was fully locked in yet.

“There were a few names being thrown around but I said I wanted a former world champion or a top five guy.

“That’s what I’m chasing and what I wanted but where I sit at world number three people think that fights would happen automatically and these guys in the top ten would jump at the opportunity to fight a top three fighter but it just doesn’t happen.

“A lot of guys turn the fights down; a lot of world rated contenders don’t want to deal with us.”

Despite such machinations, Kambosos was content to go the ‘hard road’ as he called it. The end goal was world championship glory in the biggest boxing market in the world.

“Some people said to me when I signed to fight in the U.S. that you can win your world title in Australia then go to the America but I want to go the hard road,” Kambosos said.

“You have to remember I don’t come from a distinguished amateur career, I’m not an Olympian or a world championship representative, I don’t have a famous father or a huge amount of sponsors behind me.

“I’m that guy that came from the local Croatian club, I’ve had to earn everything the hard way and that’s not about to change.

“I want to win that world title in America.”

A back-and-forth affair ensued and with the fight in the balance going into the tenth and final round Kambosos dropped Bey with a precisely placed uppercut to seal the victory. Momentum was gaining for the lightweight contender.

A further test came in Kambosos’ next fight in the form of another ex-champion in Lee Selby. Once again, the Aussie lightweight was forced to fight on the road to secure a big name.

“I’m too fast, too strong, too aggressive, to smart, too powerful. Everything.

“What a win, world number one.

Many scoffed when Lopez signed the fight. He had little choice however as the IBF had mandated that he face the unbeaten Aussie.

Purse bids, COVID, multiple postponements and a fair amount of ridicule followed the bout over the course of the better part of a year but Kambosos was steadfast in his belief that he would win.

“I win this fight, and I will, and I have to go down as the greatest fighter ever from Australia,” Kambosos told me in an interview for The Ring Magazine. 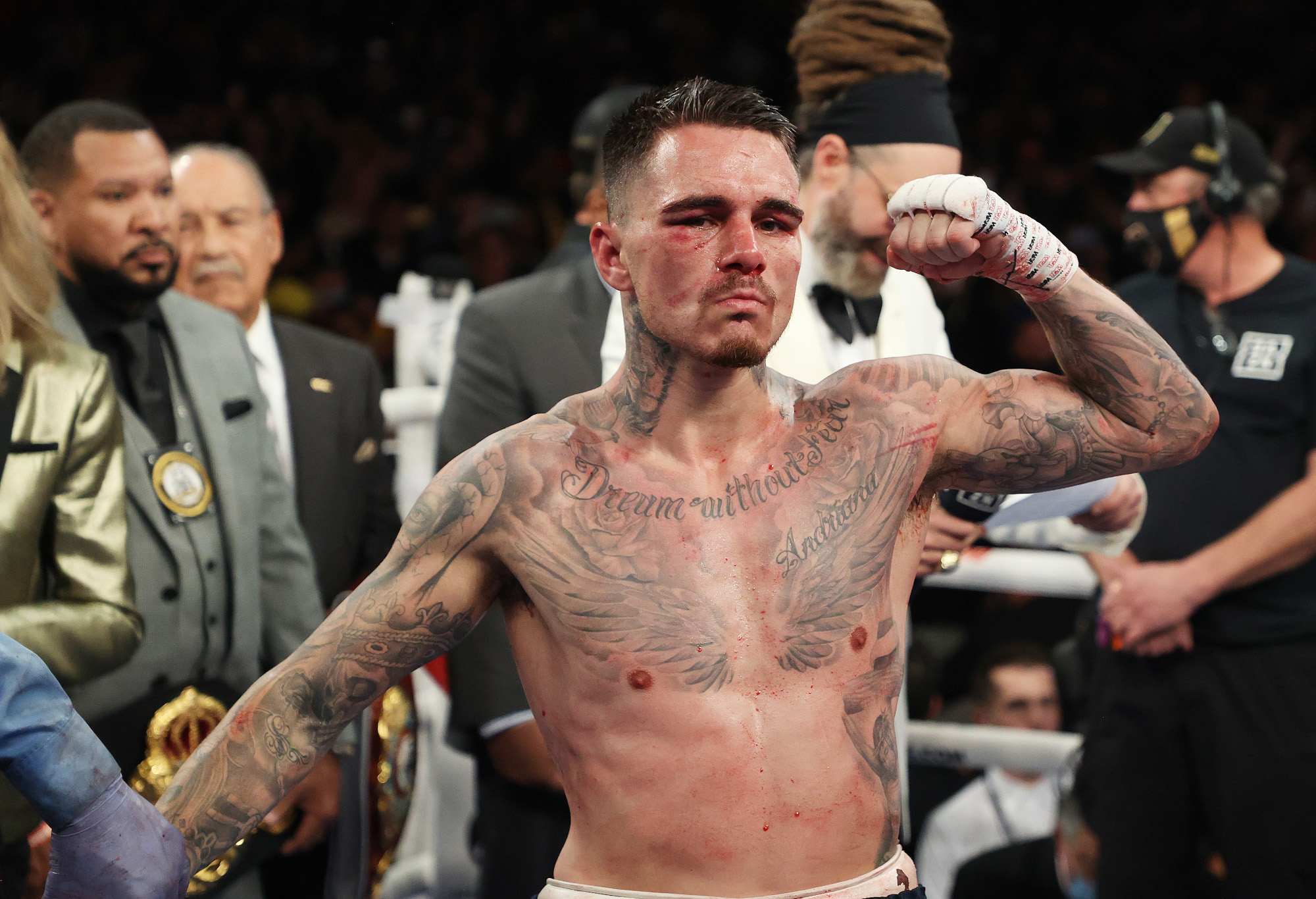 “No disrespect to Jeff Fenech or Lionel Rose but what I have done before this fight and then to go out and win every single belt is massive.

“I become a global superstar and obviously the money will be huge but I’m not fighting for the money.

“A lot of people are hitting me up today saying wow, the money you’re going to make but I pretty much told them f*** the money, I want them belts.”

The build up to the fight wasn’t pretty. Lopez acted as if Kambosos was merely a speed bump on his way to bigger and better things. After all, Lopez had just beaten the formidable Vasyl Lomachenko, how could this relative unknown from Australia beat him?

Content with the underdog status, Kambosos displayed his usual confidence when written off by just about every pundit in the world. Much like the tattoo emblazoned across his chest, the Greek-Australian dreamt without fear.

“They’ve been saying the same thing since I fought Robert Toomey all those years ago,” Kambosos says of his 2014 fight where he won the Australian title.

“They said the same thing when I fought [Brandon] Ogilvie and [Qamil] Balla and when I was going over to the U.S they said I wouldn’t win a fight over there.

“I’m still standing and I’m still undefeated so whatever people say, let them doubt me.

“I love that underdog mentality and again I go into another fight as an underdog but what are they going to say when I beat the supposed hottest fighter in the world at the moment? Where does that put me on the pound-for-pound list in the world?”

What followed was a fight of the year contender.

Not only did Kambosos hold his own, he dominated the champion through the first half of the fight after sensationally dropping him in the first round. Then, as boxing so often does, drama unfolded. Lopez landed a shot that would have finished most fighters. The Brooklyn native is a born finisher and many believed it was only matter of time before the challenger was rendered unconscious.

Kambosos however had other ideas.

Like a Spartan warrior, the Greek-Australian came out firing in the final two rounds bloodying the champion and earning a split decision victory. Kambosos finally had the title and respect he so coveted. The making of an Australian great was complete.

As I often have after each of his fights I sent him a text message. It read: “I knew this day would come.”

All you need to know about Usyk - Joshua 2, when it starts, where to watch and who is going to win

There was a time when a fight like the one that is happening on this weekend would have stopped the world. Largely because of…