The headline might start with a headline player, but the importance of last week’s unexpected change in rugby’s eligibility rules will extend far beyond Israel Folau. It promises to shake the rugby world to its very foundations.

For those who have been self-isolating from the flow of sporting information over the past week, the changes in criteria mean that a professional rugby player can now represent more than one nation in the course of his career. The restrictions are as follows:

* The player must stand down from international rugby for three years.
* The player must either be born in the country to which they wish to move, or have a parent or grandparent born in that country
* The player may only change union once, and each case will be assessed individually by the World Rugby Regulations Committee.

The change opens up a world of possibilities for Fiji, Samoa and Tonga. There is a high-quality tier of players who either committed to one of the European nations because of the opportunity to secure their financial futures, or are recent Southern Hemisphere ex-internationals still capable of Test-level performance.

The enthusiasm for the new changes is the same in the North and the South alike. The Bristol club captain Steven Luatua commented, “I feel like it would definitely add to those little islands, giving them a little bit of joy in seeing some better players, different players play for their countries.”

New Zealand’s newly-appointed captain in 2021, Ardie Savea, added, “I would love to play for Samoa. Heart and soul, I still love the All Blacks jersey, and what it’s provided to me and my family. But man, the heart and the soul go back deeper. My Samoan blood goes back thousands of years.”

The coaches of Tonga and Samoa had little doubt about the significance of the new ruling.

“First, there was disbelief that it has happened in my lifetime. And second, I think there was more relief followed by elation,” Samoa’s Seilala Mapusua commented.

“It’s not going to mean that we’re going to win every Test match, but it does go a long way in terms of strengthening our team. The main thing is being competitive, and we had some quality players that have been sitting on the side-lines, just watching for the last few years.”

“We’re not in a position to bypass players of Israel’s calibre. We’d welcome him with open arms,” the Tonga coach said.

“I explained to him where we were at in terms of what’s happening with this revisiting of this new eligibility rule. He totally understands it. I said, ‘If they overturned this straight away, you could be available for us next year’.

Imagine players like Folau, Charles Piutau, George Moala, Ngani Laumape (if he can get special dispensation), Vaea Fifita and Sekope Kepu all lining up in the red of the Ikale Tahi for the national anthems at the 2023 World Cup.

It would improve the overall competitiveness and cachet of the tournament immeasurably.

Recent ex-Wallabies who could find themselves fronting their old country might include Henry Speight, Taqele Naiyaravoro, Sefa Naivalu, Sekope Kepu, Cooper Vuna, the brothers Sitaleki and Lopeti Timani, Chris Feauai-Sautia, Caleb Timu, Ben Tapuai, and Christian Leali’ifano. All of those players, provided that they are not capped by Australia again, would be eligible for one of the Pacific Island nations at the next World Cup.

What is less certain is the response of the clubs who are the primary employers of these players. Islanders are often targeted by European clubs because the international demands on them are less stringent, and therefore they are available for more of the time.

The Bristol Bears in the English Premiership are built around a Samoan coach (Pat Lam), and they have recruited a number of players of Pacific Island ethnic origin as the heartbeat of their team – John Afoa, Chris Vui and Steven Luatua (all Samoa) plus Nathan Hughes (Fiji) up front; Semi Radradra and Ratu Naulago (Fiji), plus Charles Piutau (Tonga) and Alapati Leiua (Samoa) behind. You could add Charles’ brother Saiale to that list up until the end of last season.

At least five of those are nailed-on starters in the Bears’ best XV, so more international commitments, and more time spent away from the club for the likes of Luatua, Piutau and Hughes would have a powerful impact on its fortunes.

There is no question that such players would improve their individual ‘origin’ nations. Intriguingly, Piutau and Luatua might still be able to offer value in key positions to the current New Zealand side. Imagine Piutau on the left wing with Jordie at full-back and Will Jordan on the right.

Imagine Luatua at 6 with Ardie at 8 and either Dalton Papali’i or Ethan Blackadder at number 7. Both are more balanced combinations than what New Zealand has right now.

Steven Luatua has grown as a man and as a player since his first appearance for the All Blacks as a spectacular back-row athlete back in 2013:

Now he is the Bristol club captain, a natural leader who excels at the bits and pieces of the game.

All three players offer their nations quite specific potential for improvement. In addition to his range and lineout prowess, Luatua is one of the very best in the league in the accuracy and timing of his ball placement at the breakdown:

In these two examples (both taken from a 2020 Premiership game against London Irish), the detail and intelligence of the big number 6’s game are impressive. He is careful to drop on his left shoulder and open the field for the next area of attack in contact to the right – a short-side reverse for Piutau and Luke Morahan down the right side-line.

In the second instance, he understands that immediate support is lacking, so he creates extra time for it to arrive via a release and a second pick-up.

Luatua was just as good at these understated aspects of the game in the Gallagher Premiership semi-final versus eventual winners Harlequins:

In the first example, he angles his cleanout to drive the ruck defence further infield, and that creates a little more space down the right side-line for Dave Attwood. In the second, he again ensures he falls the right way for the next phase of attack, another ‘fake-left, go-right’ play designed to release Piutau and Morahan.

Number 8 Nathan Hughes is an excellent poacher on the defensive side of the breakdown and, unlike many other modern eighth-men, he is an expert on the save and the pass from the base of the scrum:

A little more misdirection in that first close-range scrum from the Quins game, with the Bears scrum-half sprinting right, and Hughes breaking left to set up the try in the corner. In the second instance, he rescues a retreating Bristol scrum feed and releases Charles’ brother Saiale for a break down the middle of the field.

The jewel in the Tongan crown may not turn out to be Israel Folau at all, it is much more likely to be Charles Piutau, who is still playing very much at All Black level for his club in the UK. Imagine a Tongan back three containing Folau, Piutau and one of either 6’5”, 115 kilo Walter Fifita or explosive ex-Brumby Solomone Kata on the other wing. It is a mouth-watering prospect. 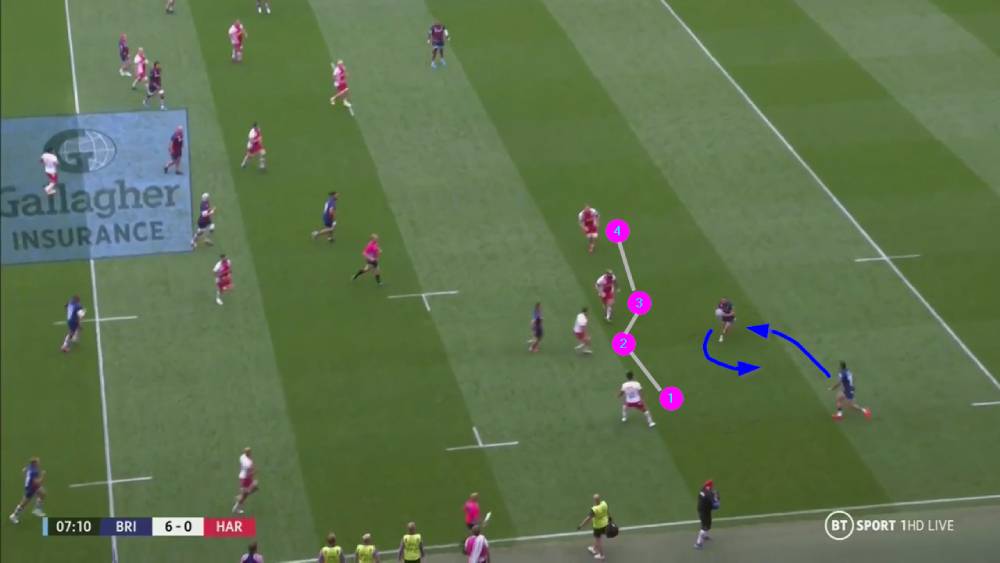 The clearing kick from Quins’ Marcus Smith is close enough to the touch-line for Piutau to treat it as a kick return and loop the ball infield. From then on, he has the vision to identify the weak links in the Quins chase with a switch of play – “1” and “2” are backs, “3” and “4” are forwards – and the footwork and acceleration to penetrate the gap. Bristol scored in the left corner a few moments later.

Later in the half, a long Piutau interception return down the right, and a neat decision by Hughes on the other side of the field set up another score for the Bears:

Piutau not only senses the danger from a Quins overlap and steps in to make the intercept, he has the foresight to preserve the space for Luke Morahan near the right touch further down field. He is still available to fan the flames by setting another ruck after taking the return pass from the ex-Wallaby. On the scoring play, Hughes takes the sensible decision: to set up a quick ruck ball so close to the line that Max Malins only has to pick it up and stroll over on the next phase.

The other unique feature Piutau would add to both the Tongan and New Zealand backfields is the undoubted bonus of a left-footed kicking game:

Summary
Some of the players who will be able to devolve back to their countries of ethnic origin under World Rugby’s new eligibility rules will be very, very good indeed. One or two of them may even be of All Blacks starter standard.

Charles Piutau in particular is still good enough to add value to the current New Zealand backfield, and the prospect of him in tandem with Israel Folau for the Ikale Tahi represents a lethal danger to any opponent.

Both Tonga (if they qualify) and Samoa are likely to be significantly stronger than originally envisaged at the 2023 World Cup. Good enough to seriously challenge the play-off aspirations of England and Argentina (Samoa) in pool D; and South Africa, Ireland and Scotland in Pool B (Tonga).

The Pacific Island nations are on an upward curve, with the new eligibility rules working their favour and two new professional platforms for Super Rugby 2022, in the shape of the Drua and Moana Pasifika franchises. The responses of some of the Islander-heavy clubs in England and France have yet to be measured, but it is a good start.

If they can get a preparation for the tournament that is both deep and progressive, there is every chance that one of Samoa, Fiji or Tonga will provide a semi-finalist at the World Cup for the first time in Pacific Island history.