The numbers show that the Rugby Championship teams won only 38 per cent of their matches, but achieved an advantage of six tries or 14 points over the Six Nations.

When we focus on Argentina we see that the ratios of tries and points for / against are negative as a result of the loss of two out of three games played.

Looking in detail, one of the items that deserves further analysis is group cohesion, which builds team performance in the medium term.

Argentina employed 32 men in Autumn Nations, 88 per cent of whom reside outside their country of origin and 53 per cent have less than 30 caps of experience.

Although this speaks of a team in training, it is also a symptom of a cohesive record weakened by the lack of group interaction, perhaps caused by the need for sanitary isolation.

Another important factor in strengthening cohesion levels is the structuring of the creative axis in Los Pumas. In TRCH2021, four different combinations were used for the 9-10 axis and in Autumn Nations the Cubelli-Carreras duo was consolidated as starters, aligning Argentina’s attack structure to the dominant skills of these players.

Santiago Carreras is not only a much more intuitive and accurate kicker than Nicolás Sánchez, but also an insightful attacker in the short transition zones. But Sánchez leads Carreras in conducting the phase game and in defensive attitude.

This uncharacteristic competition situation, which directly affects Argentina’s performance, is due to the planning designed by Mario Ledesma for Rugby World Cup 2023, which so far has not fully matured.

Argentina has been developing its kicking game in accordance with the reformulations of the game plan imposed by Ledesma.

Thus, the kicked possession indicator has gone from 27 per cent in Rugby Championship 2021 to 37 per cent in Autumn Series, as kicks have been incorporated as a fundamental element of defensive play. 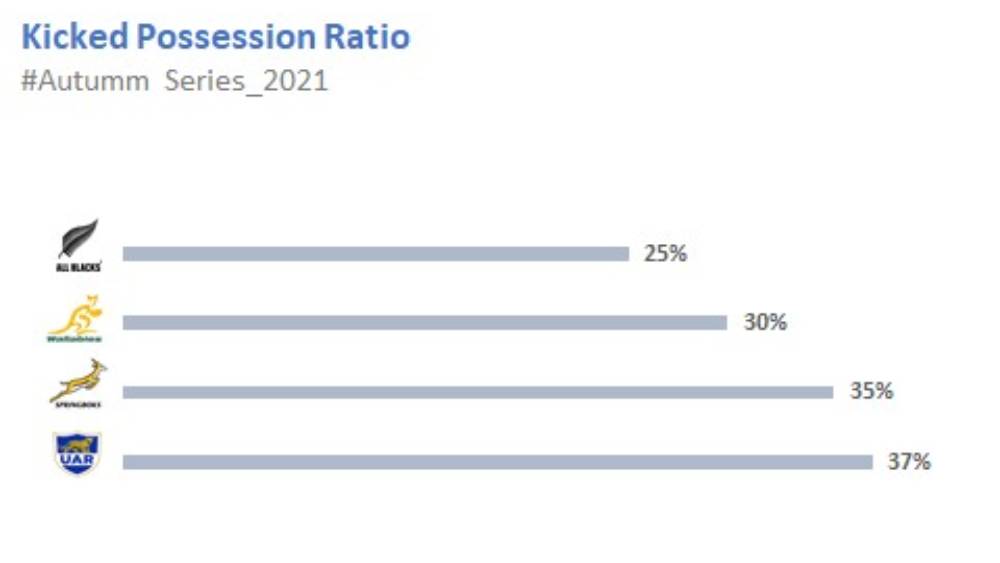 Argentina has a lot to improve on this point. Although the reception of the opponent’s kick is positive, the response associated with the return of the airplay is not appropriate, since the persecutors generally did not coordinate the sequence with the kicker in charge of returning the action.

This is something in which South Africa shows total solvency, combining body language with voice communications in the park between the tenth and the 15th. In the video that follows we can see this recurrent lack of coordination.

Another unsolvable aspect for Argentina was the excessive lateralisation of the semi-attack game. As a result of this trend, we can see that Los Pumas required an average of 16 carries to breach the opposition 22 in the Autumn Series.

The direct correlation in tries scored after exceeding the opponent’s 22 shows a 42 per cent effectiveness. This is therefore nothing so different from the game presented by Jaguares in SuperRugby.

The format of this article prevents us from delving into some aspects of the game. As a summary we could say that defensive planning relegated attack variants and limitations to the model implemented by Argentina (13-2 and 12-3) ended up exposing it to the vertigo of Ireland but also to the relative caution of France in Autumn Series.

If Los Pumas don’t improve on the more intermittent aspects of their game, they could sink into the harsh winter that invariably follows fall.